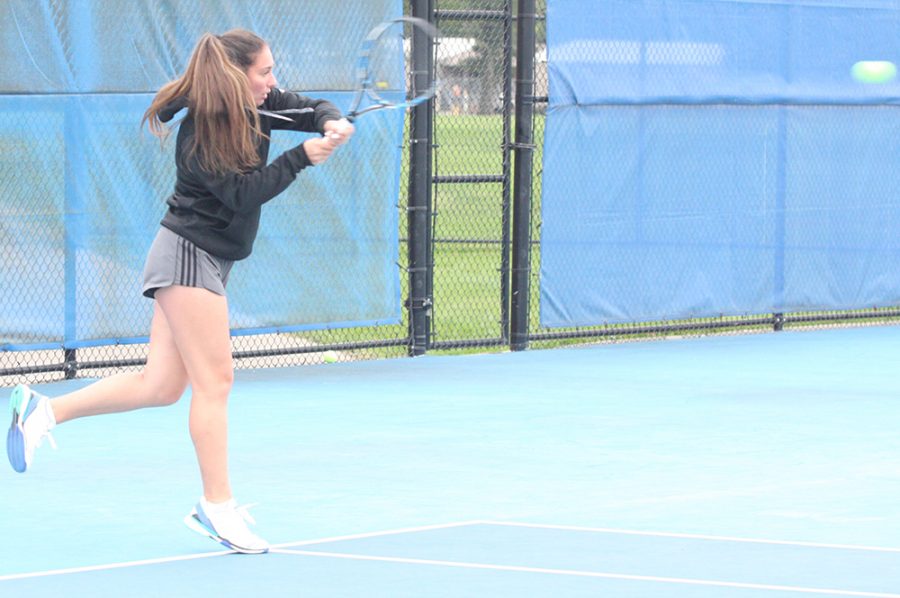 Rachel Papavasilopoulos hits a back-handed shot in the middle of a volley with Emily Pugachevsky during practice at the Darling Courts in October 2018.

Eastern’s women’s tennis team is coming off of a two-game win streak and a week off from competition ready to gain more momentum and defend the streak against Millikin University and North Central College.

The team’s last two matches were hard competition, seeing the Panthers win each match by only one point. In both matches, sophomore Claire Martin would make the difference at the number four singles slot.

“Two weekends ago, my focus was to play more aggressive and dictate play,” Martin said. “This weekend, I will be going in with the same mindset. I need to have confidence that I am ready to play.”

The team’s focus all year has been to begin aggressive and obtain doubles points early in competitions. The number one singles spot of sophomore Rachel Papavasilopoulos and senior Srishti Slaria have a combined record of 7-2.  The Panthers as a team  have not won the doubles points since February second against Bradley.

In practice the last couple of weeks the team has been doing a lot of volleying to continue to build their confidence at the net. Head coach Chris Tolson has implemented movement related drills to help their footwork in order to help the team to get to the ball faster and take control of the points.

The women’s tennis team will play this weekend against Millikin University and North Central College. Their first match of the weekend will start Friday at 2:30 p.m. at the Dodds Tennis Center in Champaign against Millikin.

“I hope to go 2-0 this weekend. Regardless of the overall score, I hope to see competitive matches and everyone incorporating what we’ve worked out in practice to our matches,” Martin said. “I’m going to keep in mind what Chris has been telling me to do and everything we’ve done in practice. All those things combined should produce good results, for me and for the team.”