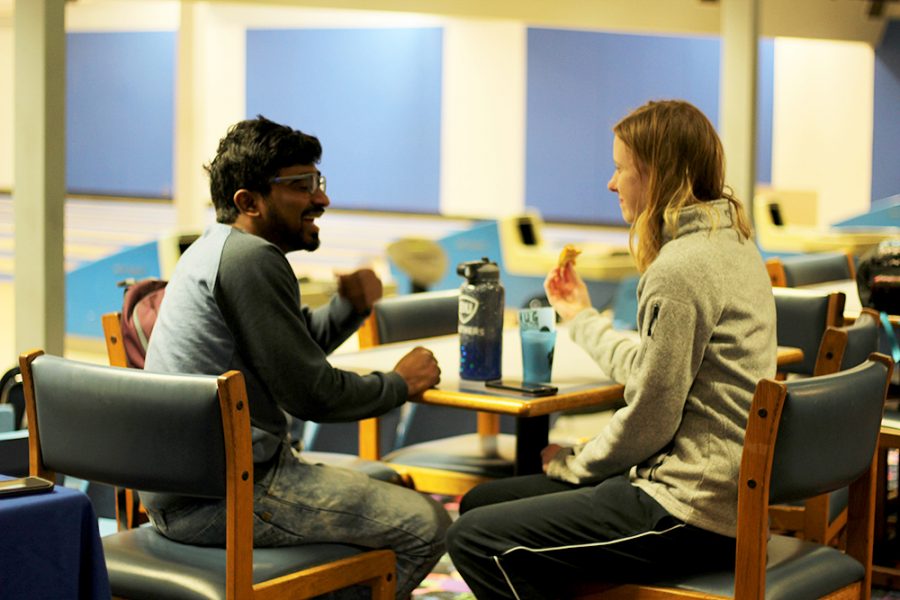 Subha Chandrasekhar, a graduate in technology, and Taylor Powers, a senior in recreation administration, attend the Karaoke Bowling event held by the Univeristy Board in the bowling alley of the Martin Luther King Jr. University Union. The two enjoy pizza provided at the event on Tuesday evening. “I saw it on Facebook and I like bowling, so I thought it would be fun,” Powers said about her interest in the event.

Mariah Marlar, University Board chair and senior public relations major, said the event was a good way to break up the monotony of midterms.

“It’s fun to see people come out and have fun and relax with their friends,” Marlar said. “It’s a nice little break, and they always say to break up studying, so it gets people out and not worrying about their schooling for a little bit so they can focus better.”

Powers said her favorite part of the evening was “free bowling, pizza, and friends.”

Victoria Casco, a junior health administration major said she came to get break from studying for midterms.

“It’s nice to be out with friends, not having to think about school and having fun,” Casco said. “It was much needed.”

Marlar said the University Board thought it would be a nice way to get students to the bowling alley.

UB offered to pay for the first 100 people who showed up for the event, and everyone that followed would pay $1 per game.

The event offered not only bowling, but also karaoke and free pizza for those in attendance.

“Karaoke and Bowling” was the final event in a three-part series call the “Date Night Series.”

Other events in the series were “Stuff a Bear,” where students were able to stuff a small stuffed animal, and “Soup-er Bowl,” which was a cooking demonstration with the Health Education Resource Center.

Maxie Phillips, second vice president and a senior English major, said the sorority held the event to put their name out more on Eastern’s campus.

“All of us are still kind of new members, so we decided to have the event to introduce ourselves more to people on campus so they’ll get to know us more and get to know our name,” Phillips said.

Phillips added they wanted to be out around campus more because they have a bigger group of girls in the sorority than in past years.

Phillips said it is important to have open event like “Bowling with the Zetas” to get more involved with other groups on campus, especially other sororities.

“I feel like there’s a lot of stigma around people in Greek sororities talking with people in non-Greek sororities, and it’s just one of those events that helps break down barriers,” Phillips said. “We can be open and have fun. It a fun way to meet people and have fun in a fun place.”

“I came to support my Zeta friends and bowl with them to help them raise money,” said McCulley.

McCulley said his favorite part of the night was “kicking all of [his friend’s] butts.”