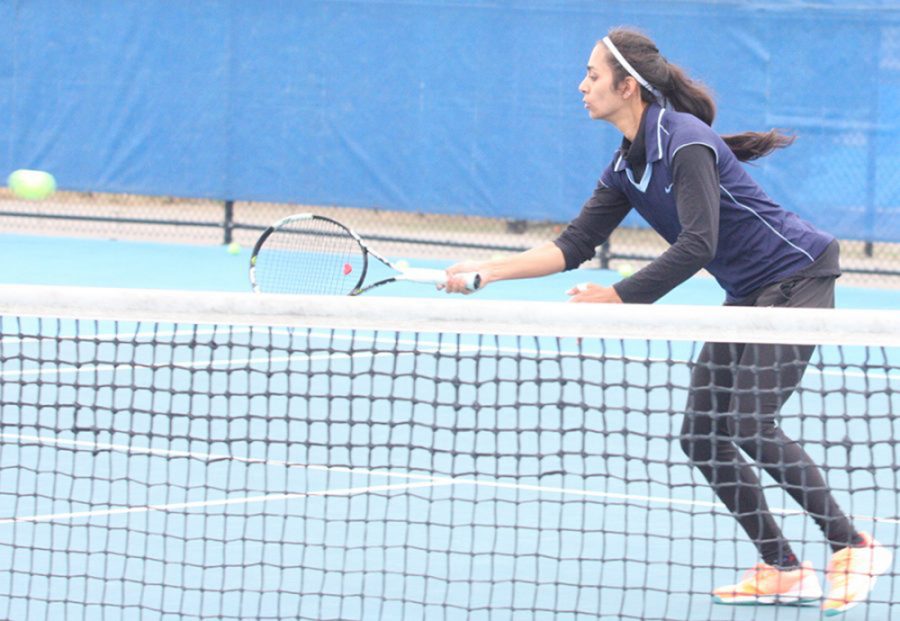 Eastern’s Srishti Slaria returns a ball at the Darling Courts in a meet this fall. Slaria is a senior on Eastern’s tennis team.

For senior Srishti Slaria, her four years at Eastern have shown her work ethic and how life is nothing but constant improvement whether in tennis or being a student.

Slaria is from Pathankot, India and was ranked 17th nationally in India for the girls Under-18 category.

Slaria said she was usually ranked in nationals and that it felt good to be near the top, but Slaria suffered an injury that would cause her to stop playing tennis for more than four months.

Slaria knew how much effort it took from her side as well as her family’s to continue in tennis and her education.

“After I started training again, I played almost two tournaments every month and traveled far distances,” Slaria said. “I was in 12th grade then, and it was a very crucial time for my studies as well. Even then, I think I managed it all pretty well, with all the absences from school, but it required a lot of hard work and dedication.”

Slaria committed to Eastern without even coming for a visit and one of the biggest reasons was the coach: John Blackburn.

“I felt that EIU is the perfect place for me, the players on the team sounded very welcoming, the coach was great, and the school was not huge,” Slaria said. “My team in the first two years of my college tennis career was very helpful, fun-loving, and we had a great team-bonding.”

Slaria began her singles play at the No. 5 spot as a freshman, posting an 11-6 record in singles play.

In her sophomore and junior year Slaria played from the No. 2 through No. 6 slot, with a combined 22-18 record. Slaria, in her senior year, has moved up into the No. 2 slot and currently has a 5-4 record in singles play.

“When I look back at my ranking, I feel proud of my achievement, and it shows me what I am capable of and what I can achieve in the future,” Slaria said. “Sometimes when I feel low or stressed out with school or tennis here, I think about how I pushed through those times and it gives me motivation to stay focused and keep moving forward.”

Even though it is difficult to manage academics and tennis, Slaria believes that being an athlete and a student are both equally important.

These awards only motivate her further to keep working hard and stay focused.

“I feel a sense of satisfaction when I perform well in both tennis and academics,” Slaria said. “It has been very difficult to manage academics and tennis these past four years, but I would not choose anything else over this opportunity and beautiful experience.”

While the season will not end until early May, Slaria wants to be remembered in the women’s tennis program as hard-working and a dedicated student-athlete.

“I hope that my current teammates look up to me and feel encouraged and motivated to work hard and believe that each one of them can achieve great heights,” Slaria said. “I want to set an example for the future team players that nothing is impossible if you have the willpower and determination to pursue your goals.”

Slaria will continue to stay focused and healthy in order to play her last two months of her college career. Her hope is to compete, make the best of it, and make it to and win the OVC Conference Tournament.

“Each year, it has been my dream and goal to win the OVC Championships and get that conference ring, which I am sure is what every athlete desires,” Slaria said. “It would be a dream come true if we were to win this year’s tournament, and will be the perfect graduation gift for me.”