Notebook: Race at top of OVC tightening up for final games 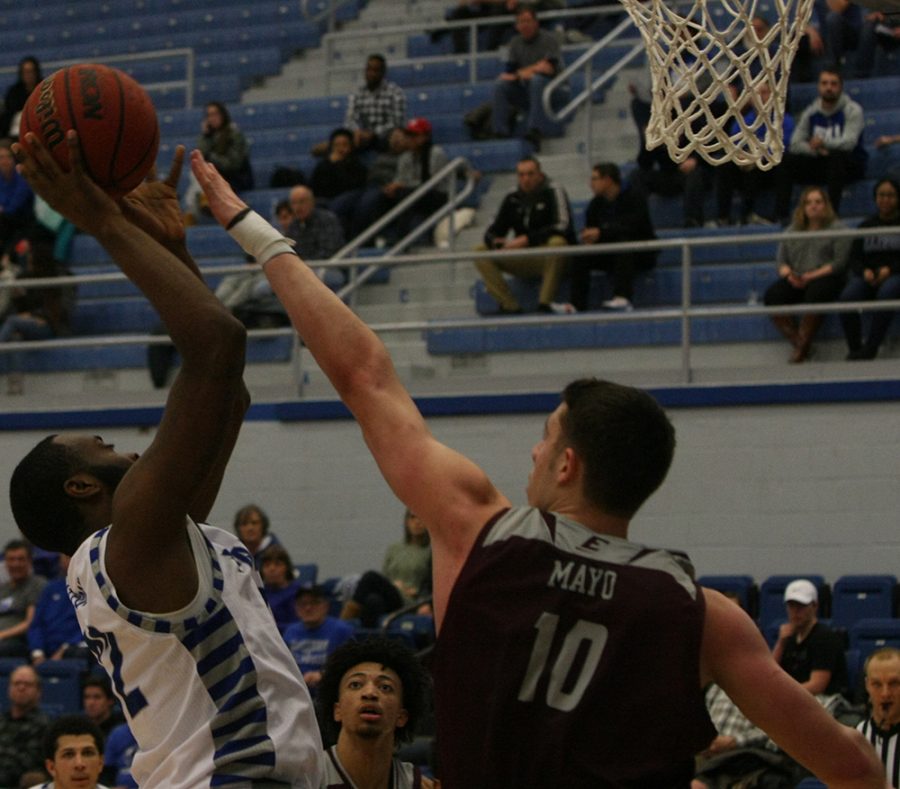 JaQualis Matlock attempts a shot attempt around the basket as Eastern Kentucky’s Nick Mayo tries to block it during Eastern’s 67-66 victory Jan. 31 in Lantz Arena.

The race for the OVC regular season crown comes to a close this weekend, and it’s a two-headed race at the top as Eastern floats behind the top four.

The Panthers (14-15, 7-9 OVC) had as unsuccessful of a weekend as you can, dropping games to both Belmont and Tennessee State, but the 5th seed in the conference still belongs to Eastern.

Eastern is currently tied in conference record with Morehead State and just a game ahead of Tennessee State.

The good news for Eastern is Morehead State’s tough slate ahead; the Eagles have to hit the hardwood against one of the OVC’s top teams in Murray State on Thursday before facing one of the top scorers in Eastern Kentucky’s senior Nick Mayo on Saturday.

For Eastern, the road is mildly easier, as the Panthers take on third-seeded Jacksonville State on Thursday before facing Tennessee Tech, the last place team in the OVC, to close out the regular season.

The real business is happening above the fourth place dividing line, as just one game separates the top four teams in the conference, and preseason favorite Belmont controls its destiny.

The Bruins (23-4, 14-2 OVC) secured two blowout wins last week as they ride eleven straight victories into the last week of the regular season.

Belmont gets two sub-.500 opponents with Tennessee-Martin and Southeast Missouri this week to close out the campaign, and the Bruins claim the tiebreaker over fellow top-slotted Murray State.

The Racers (23-4, 14-2 OVC) have a tougher slate as they face Morehead State to decide playoff seeding before taking on third-ranked Austin Peay over the weekend.

Murray State laid claim to the top spot of the conference for a large portion of the season, but after falling to Jacksonville State just a few weeks ago, the race has been much tighter.

The good news for the Racers is they already boast a win over Austin Peay just under two weeks ago, but the bad news was that the win came by only two points.

Murray State needs to win out and get a loss from Belmont to secure the number one seed in the postseason.

Meanwhile, just below the top spot chatter is Austin Peay and Jacksonville State, as both teams are in no danger of falling out of the top four, but could manage to secure a higher seed with losses from the top two squads.

Austin Peay (21-8, 13-3 OVC) faces Eastern Kentucky on Thursday before its date with Murray State over the weekend, while Jacksonville State (21-8, 13-3 OVC) gets to play Southern Illinois Edwardsville after the matchup with Eastern this week.