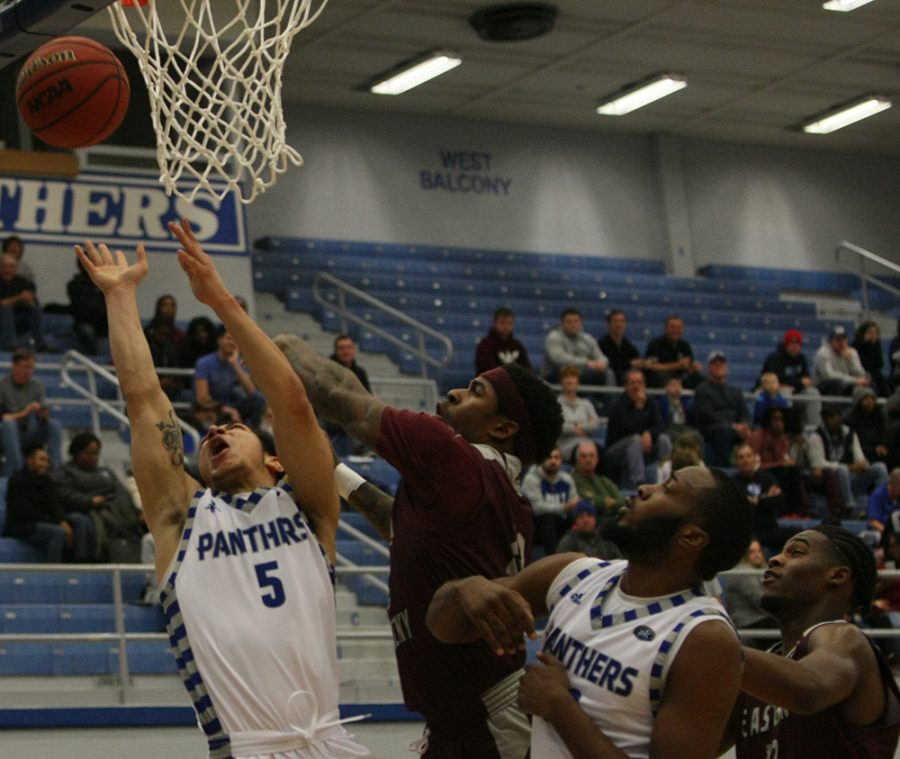 Shareef Smith takes a layup attempt while an Eastern Kentucky defender tries to swat it away during Eastern’s 67-66 victory in Lantz Arena Jan. 31.

Another bad offensive performance by the Eastern men’s basketball team extended its losing streak to three games, with a 75-60 loss to Tennessee State Saturday.

As was the case against Belmont Thursday (the best team in the OVC), Eastern could not find many easy shots and took some bad shots, leading to a bad shooting night overall.

In the five previous games before Eastern’s loss to Belmont Thursday, the team averaged 79.4 points per game, in what was the best stretch of offensive play the Panthers had all season.

Players moved off the ball, set screens and got themselves good shots that were not always contested or forced.

But, against Tennessee State, in what was the Tigers’ senior night, Eastern’s offense was stagnant and had no rhythm during hardly any stretches.

“I thought we fought hard, but we had far too many empty possessions,” said Eastern head coach Jay Spoonhour.

But, the Tigers’ seniors stepped up and played a great game, one that put them into a playoff spot.

Armani Chaney got into foul trouble late in the game, with four fouls, but he finished the night with 13 points.

The only other senior that played for the Tigers, Stokley Chaffee Jr., had eight points and nine rebounds in a good game playing around the basket.

They had help from Kamar McKnight, who scored the second-most points for the Tigers with 15, and Michael Littlejohn, who led everyone in the game with five three-pointers and a game-high 21 points.

Eastern, on the other hand, only had two double-digit scorers, Josiah Wallace with a team-high 19 and Ben Harvey with 11 in his first start of the season.

And, yet, Eastern had a chance to tie the game or take the lead late in the second half.

“We had opportunities to cut into their lead in the second half, but we missed some makeable ones,” Spoonhour said.

Eastern trailed by 10 (39-29) at half, and its deficit stayed above and around 10, up until there were only two and three quarters minutes left in the game.

At that point, Eastern had managed to claw its way back and be within good striking distance.

Wallace just made a free throw for Eastern and the Panthers trailed 65-58.

Until the Tigers made a basket a minute later, Eastern missed four shots, two of them back-to-back after Mack Smith grabbed an offensive rebound from Wallace’s missed second free throw.

Any of those shots would have put Eastern at least within five points, but instead followed the narrative the offense played out in the rest of the night.

After the made basket, Wallace made two more free throws to keep Eastern within seven, 67-60, with 1:18 left.

But shortly after, Chaney made a dagger of a three-pointer with 48 seconds left to put the Tigers up by 10 and pretty much take the air out of Eastern.

What followed was the ever-hopeful strategy of fouling repeatedly by Eastern, hoping for some missed free throws by the Tigers, but they made five out of the six free throws and Eastern missed the only three shot attempts it could muster until time ran out.

Eastern is now tied for 5th in the OVC with Morehead State, who defeated the Panthers at home this year.

Tennessee State got an important win, as it set itself alone for seventh place with three team just below it tied with five conference wins for the last current playoff spot.