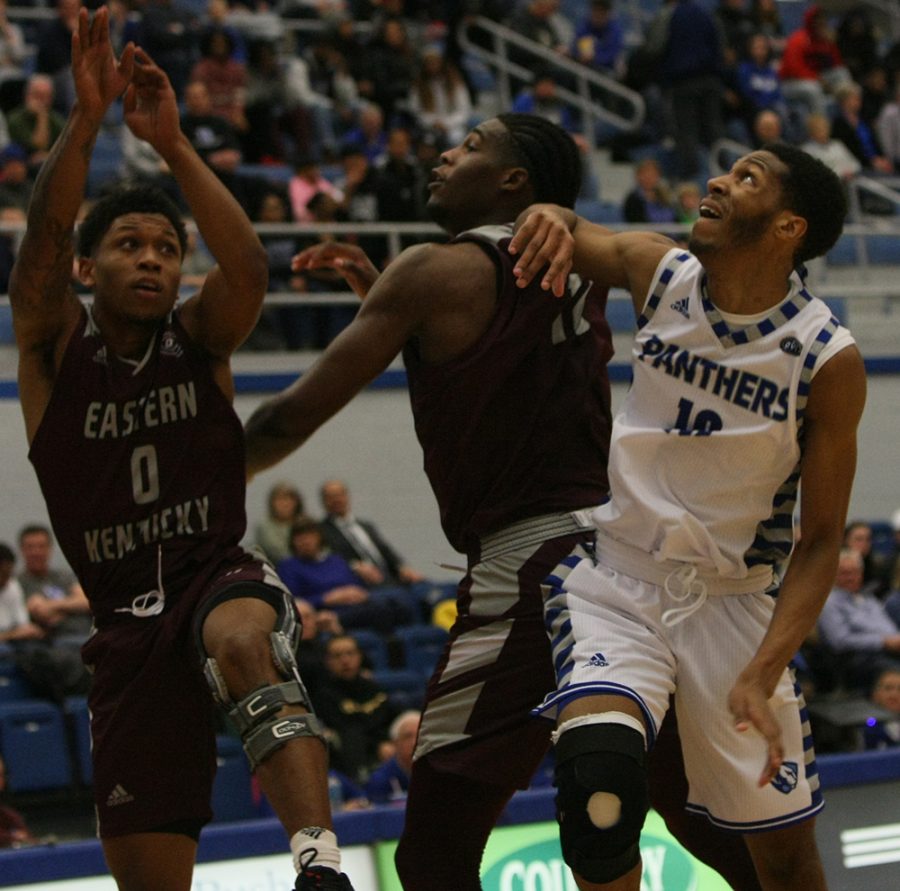 In its last seven games, the Eastern men’s basketball team has gone 2-5 and now faces arguably the best all-around OVC team, Belmont, Thursday on the road.

Belmont was the preseason favorite to win the OVC championship, and after losing twice in a two-week span to Jacksonville State, a power shift seemed to be emerging in the OVC.

Jacksonville State and Murray State seemed invincible, with Austin Peay even tied for the top spot with those two.

Belmont, on the other hand, was stuck on the outside looking in with Eastern, who had the same 5-2 conference record.

But, while Eastern took a wrong turn in its season path (still in fifth place, though), Belmont has done nothing but reclaim the top spot in the conference (tied with Murray State at 12-2 in the OVC).

The Bruins started their current nine-game winning streak with a rebound win over Tennessee State, two days after the second loss to Jacksonville State.

Then, five days later, Belmont stunned the hype-building Murray State Racers with a 13-point win in the Racers’ home arena.

With help from Jacksonville State, who also beat Murray State after that game, Belmont is now tied at the top with the Racers, as both the Gamecocks and Austin Peay have three losses.

Belmont has a complete roster, led by the preseason OVC Most Valuable Player Dylan Windler.

Windler is averaging 20.8 points per game (third in the OVC) and 10.4 rebounds per game (first in the OVC). He is also fourth in the conference for shooting 82.1 percent from the free throw line.

“They’re the best offensive team (in the conference),” said Eastern head coach Jay Spoonhour. “(Windler) goes after (rebounds) every time. That’s a skill in itself, and when you add to it really good feet and really good hands, that’s how you end up getting a guy that has great numbers like he does.”

But Windler is not alone.

He has guards Kevin McClain and Grayson Murphy to help him, who average 16.4 and 10.2 points per game, respectively. Center Nick Muszynski also scores 14.8 per game and grabs 6.2 rebounds per game.

What makes Belmont even more fearsome is that in the road win over Murray State, and another road win over UCLA, Windler an average 28.5 percent from the field and was not the leading scorer in either game.

There is plenty of depth to the Bruins’ roster, so even if Eastern can hold Windler to a low scoring night, someone else will step up for Belmont.

Eastern, on the other hand, is playing its best offense of the season, but is coming off a bad home loss to Southeast Missouri.

Though a tough challenge, a win Thursday would help Eastern stay as high as possible in conference standings.

Keys to the game

The Panthers lead the OVC in three-point field goal percentage at 38.2 percent.

For Eastern, stifling Belmont’s inside play (offensively and defensively) will be the key.

If the Panthers succeed in giving Windler a tough time, the main two heroes who showed up for Belmont when Windler struggled were McClain and Muszynski.

McClain had 20 points in the UCLA win (led the team) and 23 (lead the team) in the Murray State win.

But Muszynski’s 20 points in the Murray State game was the added boost the team needed for the win.

A big reason Eastern lost a late lead (and eventually the game) to Murray State Feb. 7 was because the Racers’ big man, Darnell Cowart, had 23 points.

McClain could have a big game, and other guards are capable of producing for Belmont, but winning inside will be a big help for Eastern.

The Eastern-Belmont matchup is set to start at 7 p.m. Thursday.