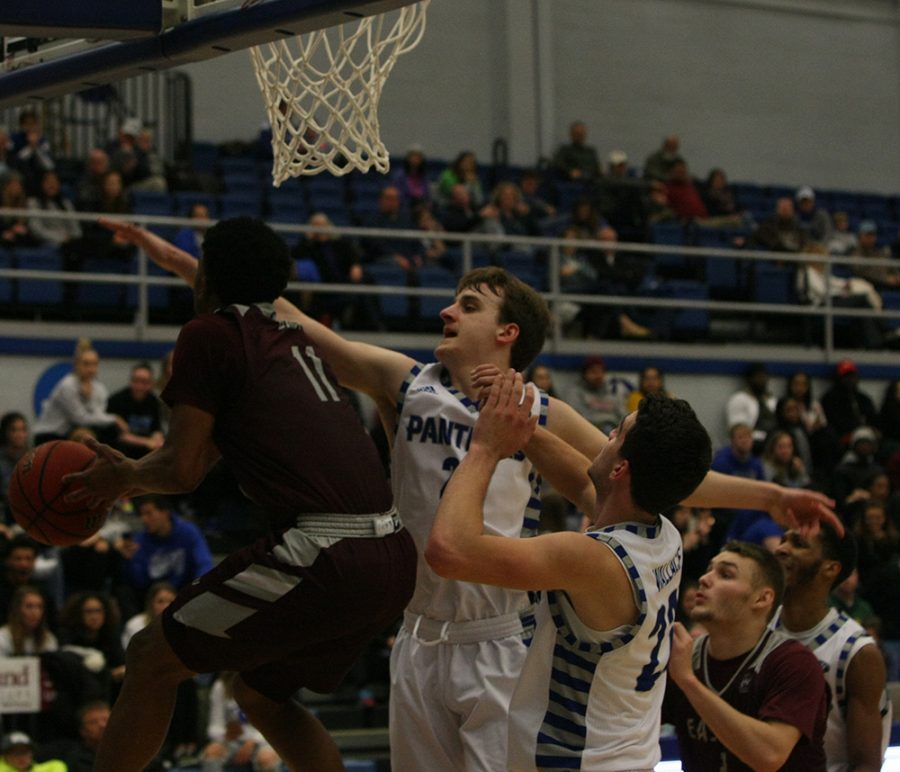 The Redhawks (9-18, 4-10) made it difficult for Eastern (14-13, 7-7) to run the offense the way it would have liked to and stole a win from Eastern, after the Panthers controlled much of the first half.

Saturday, Southeast Missouri stole another win from Eastern, on the Panthers’ home court.

In short, the best spot Eastern can finish at the end of the season is fifth place, which is not a secure spot at all.

Teams like Morehead State and Tennessee-Martin are just one and two games behind Eastern, respectively, and Eastern has a tough road game Thursday at Belmont.

Eastern’s spot in the conference standings was already shaky after two road losses last week to Austin Peay and Murray State (both of which were very winnable games for Eastern), and the loss to the Redhawks Saturday did not help.

The problem Eastern ran into in the Jan. 26 game against Southeast Missouri was not the problem Saturday, and Eastern had a much better game offensively.

Instead, the problem was closing the game out down the stretch, an issue Eastern has had before this season, including both road games against conference leaders last week.

The first inkling of worry for the Panthers came with three and a quarter minutes left in the first half, when the Redhawks grew their lead to 12 points, finishing a three-minute, 11-0 run.

After such a dominant win over Southern Illinois Edwardsville Thursday (79-65), trailing 46-39 at halftime was a position Eastern was familiar with, but not thrilled about.

Nothing looked any better for Eastern during the first five minutes of the second half, as the Redhawks had another 12-point lead at one point and lead by eight with 15 minutes left to play.

Eastern managed to take the lead and stay neck-and-neck with the Redhawks during the next 11 minutes of play, though.

Over the next five minutes, from the point Eastern was trailing by eight with 15 minutes left, the Panthers went on an 11-2 run to take a 62-61 lead.

Ben Harvey, who off the bench exploded for his career-high 29 points, started the run for Eastern with a three-pointer.

Southeast Missouri’s Gabe McGlothan made a jump shot, the only Redhawk basket during Eastern’s run, and Mack Smith followed that with a three-pointer to bring Eastern to within one point, 61-60.

A minute later was when JaQualis Matlock finally broke the seal for Eastern, making a fast break layup to give Eastern the lead.

Over the next six and a quarter minutes, the two teams were pretty evenly matched as Southeast Missouri held a constantly-fluctuating small, single-digit lead.

But, as is the problem Eastern has faced at times this season, it could not close the gap and close out the game, instead watching the Redhawks grow their lead to 85-75 with 39 seconds left.

Harvey lead all scorers with 29 points on 11-of-14 shooting, including 3-of-4 from three-point range. Wallace scored 12 points, Smith added 11 points and Kashawn Charles had 10 off the bench.

Eastern has its final tough road test of the regular season Thursday when it faces OVC powerhouse Belmont, closing out the season’s road schedule Saturday at Tennessee State.