Pride members discuss struggles of being both black and queer 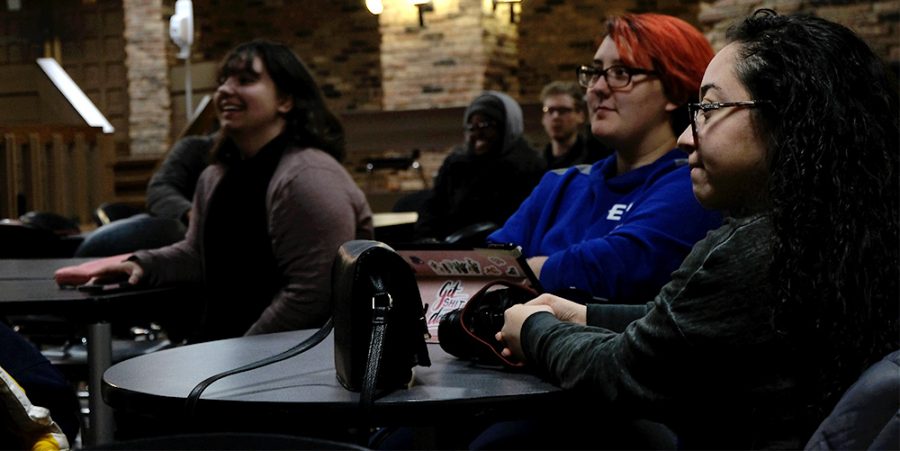 The crowd listens to the panel’s discussion during Black Queer Lives Matter Wednesday night in the 7th Street Underground.

Being black and queer in a predominantly white community is the moment when those who identify as that are aware the most about their identity.

Three Pride members and an adviser of the organization talked about being black and queer in society today at the Black Queer Lives Matter panel discussion that was on the 7th Street Underground Wednesday night.

Dontae Milner, a Pride member, said he does not really think about being out in public as much because he can also pass as a straight black male.

He said when he is more aware of his surroundings it is in Mattoon, but he is only there for a short period of time.

Tiana Webb, who identifies as queer, said when she is on campus she feels students are very accepting.

Although during a summer term, Webb said it was a different experience to the point where she felt unsafe and it made her become aware of her surroundings.

“A lot of stares from people. A lot of confederate flags,” Webb said. “It was (at the point of) just being very uncomfortable with it and unsure.”

Yolanda Williams, the academic adviser of Pride, said it was very important for her to be open about being a lesbian to get other people to have someone to identify with them and normalize what their life is.

“I know there is people who struggle coming out, and I don’t push them, but when I meet other black gay professionals and they ask why did I chose to be out is because I work with students,” Yolanda Williams said.

Yolanda Williams said she does not want students to suffer and face these challenges of coming out alone.

She said when she was coming out in her late 20s, there was no public figure to look up to, as there is know in the media.

Jovan Williams, the vice president of Pride, said his experience of coming out was in two stories, one to his adopted parents and one to his birth father.

He said both were very accepting of him and were just waiting on him to tell them.

Yolanda Williams said she came out to her white gay friends first, because she said it was harder to tell her black friends and sorority.

Jussie Smollett, the “Empire” gay actor who was attacked in Chicago by two offenders who yelled homophobic and racial slurs, was also asked what the panelist thought of him being accused of faking the assault.

Yolanda Williams said she found it really sad that in 2019 people are thinking something that horrific could be faked.