Eastern’s depth proving it is important 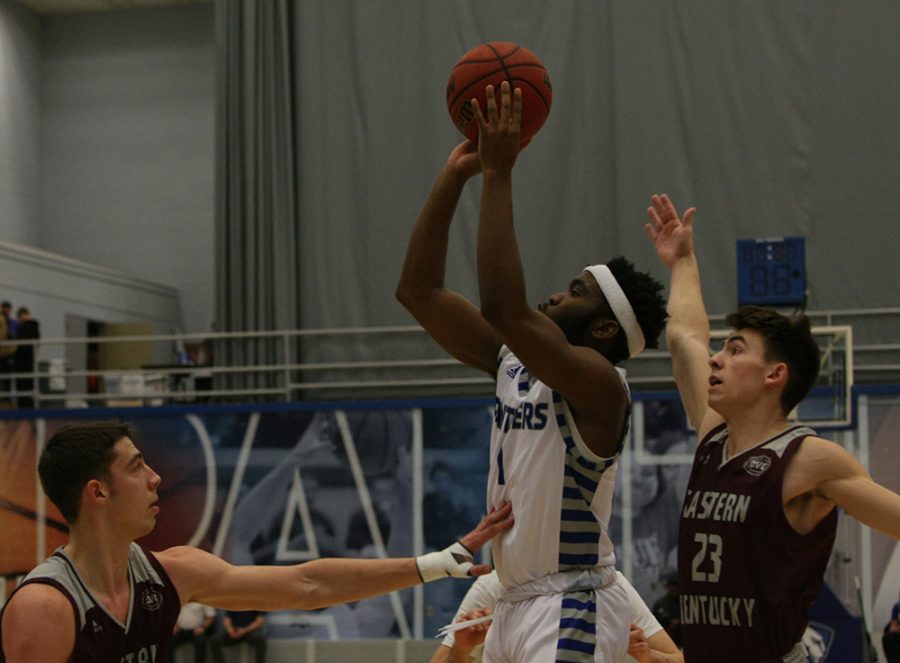 Kashawn Charles rises for a pull-up jump shot with two defenders on him during Eastern’s 67-66 victory over Eastern Kentucky in Lantz Arena Jan. 31.

One thing Eastern men’s basketball head coach Jay Spoonhour was excited for before the season was the depth the team would boast.

He said the players, both returning from last season and new to the roster, would be able to play multiple positions and had a lot of athleticism.

His players have certainly shown that so far this season.

What is even more impressive is the efficiency and level of play that players coming off the bench for Eastern have put up so far.

Only three players, Mack and Shareef Smith, and Josiah Wallace, have started all 25 games this season.

Another handful of Panthers have started half of their games played, or a handful of them.

Then there are players like Ben Harvey, Cam Burrell and Kashawn Charles, who have not started a single game this season but are making an impact every time they step onto the court after tip-off.

“It actually feels great (having an impact off the bench),” Harvey said. “Because my whole life I’ve been starting and haven’t really come off the bench, but it kind of gives me that fire to go in and play as hard as I can.”

Harvey is the third-leading scorer for Eastern, averaging 9.4 points and 4.1 rebounds per game, on an average 21.8 minutes per game. He was also 11th in the OVC at one point for three-point field goal percentage.

Similarly to Harvey, Charles was also one of the OVC’s elite three-point shooters, at one point leading the conference in three-point percentage at 51 percent.

Neither are on the list currently, but Charles would be leading the conference again if he were present on it.

“Coach gives us the confidence (to shoot),” Harvey said. “In practice, he tells us to shoot when we’re open.”

Burrell, like Harvey and Charles, is one of the newcomers to Eastern who has had an impact right away.

He has given Eastern a viable big man in the middle to rebound and score (along with JaQualis Matlock) and has quickly become the team’s leading rebounder since returning from a knee injury against Bradley Dec. 15.

Spoonhour has dubbed Burrell as one of if not the best rebounder for the Panthers; Burrell is averaging 4.9 rebounds and 5.8 points per game this season.

While Burrell is mostly relegated to drifting around the lane, Harvey and Charles, like most Panthers, are able to play different positions offensively.

Harvey, Charles, Mack and Shareef Smith, Josiah Wallace and Shawn Wilson all can bring the ball up the floor and start the offense. Mack Smith, Wallace and Harvey, mainly out of that group of players, can also grab rebounds consistently.

With so many guys able to play all over the court, Eastern is able to make its offense more malleable and flexible, helpful since the team is still working up to the point of making its motion offense fluid enough for the coaches’ liking.

“(Our depth) says a lot about our team,” Harvey said. “We have a lot of players who can start and a lot of players with different talents. It makes it a lot easier on all of us just to have that talent and depth.”