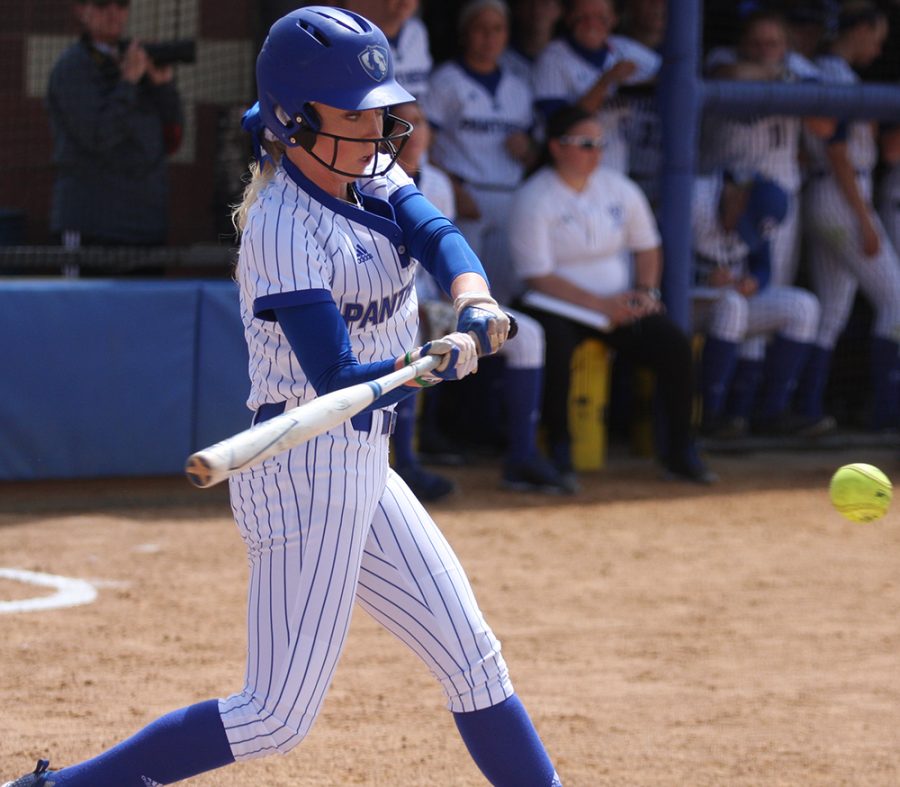 Megan Burton swings at a pitch during an at-bat in the Eastern softball team’s doubleheader against Jacksonville State at Williams Field in April of 2018.

The University of Chattanooga’s Halie Williamson was the difference between the Eastern women’s softball team opening its season with a losing record, rather than a winning one.

Williamson delivered a go-ahead RBI single in the top of the seventh inning to break a 1-1 tie and give her team a 2-1 win over Eastern Saturday in the Rafter Memoria Classic. Williamson’s single came as an unearned run after Eastern second baseman Mady Poulter delivered a throwing error at the top of the inning.

Eastern got Morgan Lamore on base in the bottom of the seventh inning via walk but failed to bring her home. The loss to Chattanooga dropped Eastern to 1-2 at the time, with two games to play in the five-game tournament.

Eastern opened the tournament in tight fashion, losing in the final inning to Ohio 9-8 on Friday.

Ohio took a 9-5 lead in the top of the seventh inning, but just like in the Chattanooga loss, it would be an unearned run that would be the most pivotal for Eastern.

Ohio had already scored two runs in the top of the seventh inning against Eastern to take an 8-5 lead: It was then that an error by Eastern third baseman Denaed Santini allowed Ohio to make the score 9-5, a run that would prove costly.

Eastern rallied in the bottom of the seventh inning.

Lamore grounded out and brought in Taylor Jones to score to make the score 9-6. Megan Burton then singled one batter later and scored Poulter, and Eastern then had the lead trimmed to 9-7.

Hannah Cravens then grounded out for Eastern, scoring Breya Cooper on the play. 9-8 Ohio lead. At this point the game would have been tied in the bottom of the 7th inning had it not been for the unearned run.

Burton stole third base to move Eastern 60 feet closer to tying the game at 9-9 with Mia Davis at the plate, but Davis popped out to the shortstop and Eastern fell in its season-opening game 9-8.

Eastern lost to Ohio again in the fifth game of the tournament 4-1, but this time gave up the game in the early innings. Ohio scored once in the first inning, once in the second inning and twice in the third inning to jump out to an early 4-0 lead that, this time, Eastern could not come back from.

Both of Eastern’s wins came against the host team Kennesaw State, and both in big fashion as Eastern topped them 11-5 and 8-0.

Kendyl McKeough had four RBIs in the 11-5 win, and Eastern blew up for six runs in the third inning to pick up its first win of the season. Burton had two RBIs, and Cooper had two as well as the Eastern bats tortured Kennesaw State for seven innings.

McKenna Coffman threw six shutout innings in the 8-0 win over Kennesaw State, and McKeough added three more RBIs to her early season stat sheet in the Panthers’ second win of the season.

McKeough led Eastern with seven total RBIs in the tournament, and Burton led the team with a .375 batting average.