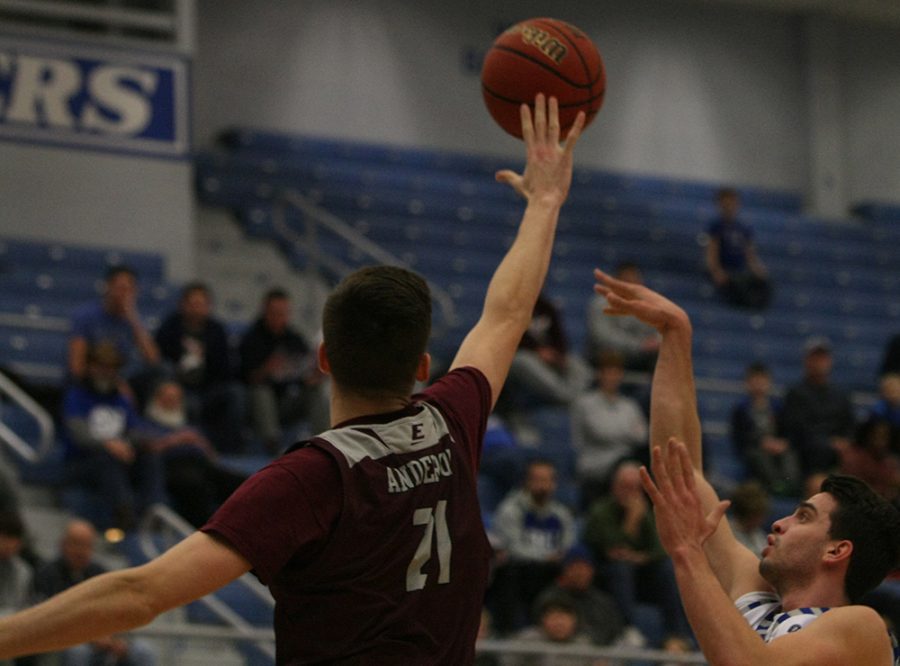 Josiah Wallace attempts a floater in the lane as an Eastern Kentucky defender flies to try and block it during Eastern’s 67-66 victory in Lantz Arena Jan. 31.

The Eastern men’s basketball team ended its weekend road trip with a 94-86 loss at the hands of Austin Peay.

The Panthers (13-12, 6-6) nearly spoiled the home game for the host Governors (18-7, 10-2), but Eastern could not make shots down the stretch and Austin Peay secured the victory.

For most of the game, Eastern was neck-and-neck with Austin Peay and even looked like it could win another important game.

Eastern faced a similar situation Thursday when it visited Murray State and had a seven-point lead with eight minutes left in the game, seemingly about to grab a great win for itself.

Taking one of the two games against two of the teams tied for the top spot in the OVC was going to be important for Eastern to remain in fifth place in the conference.

Morehead State and Eastern Kentucky were both just behind Eastern in the conference standings, both being volatile enough to tie Eastern for the spot or take it with just a few wins.

And considering who Eastern faced this weekend, two wins would change the momentum for Eastern in a hurry.

Luckily for the Panthers, Morehead State lost both of its games and Eastern Kentucky only won one game.

With 16 minutes left in the game, Eastern trailed by just one point.

Over the next three minutes, Austin Peay went on a 13-2 run to give itself a 12-point lead.

About 40 seconds later, Shareef Smith, who had a game-high 29 points, made a three-pointer to briefly calm the storm, though it came right back

Smith had a fast break layup with 11:22 left in the game, bringing Eastern to within five points.

Over the next two minutes, Austin Peay grew its lead back up to 12 points.

But Eastern was not done yet and had one final hoorah to try and get out of Tennessee with a win.

Rade Kukobat made a jumper with 2:58 left in the game, and Eastern trailed 85-83 at that point.

But from then on, Austin Peay got its lead back to as high as 11 points and Eastern only scored once more in that final time span, when Mack Smith made a three-pointer with 23 seconds left.

Eight players scored for Eastern. Mack Smith had 14 points and Ben Harvey had 12 points off the bench to round out the double-digit scorers for Eastern.

Harvey was also the leading rebounder for Eastern and two away from his second double-double of the season.

Those free throws were the difference in the game, as the Panthers did better than the Governors in a few statistical categories.

The Panthers scored more points in the paint than the Governors too (38-35).

Eastern also did well rebounding, only losing the rebounding battle to Austin Peay by two (36-34).

The Governors had five players score in double figures, led by Terry Taylor, the Governors’ star player, who had a 25-point 12-rebound double-double.

Eastern has a somewhat easier schedule this weekend, visiting Southern Illinois Edwardsville Thursday for the Panthers’ first three-game road span of the conference schedule. The panthers will then host Southeast Missouri Saturday, but both teams are dangerous in any context.