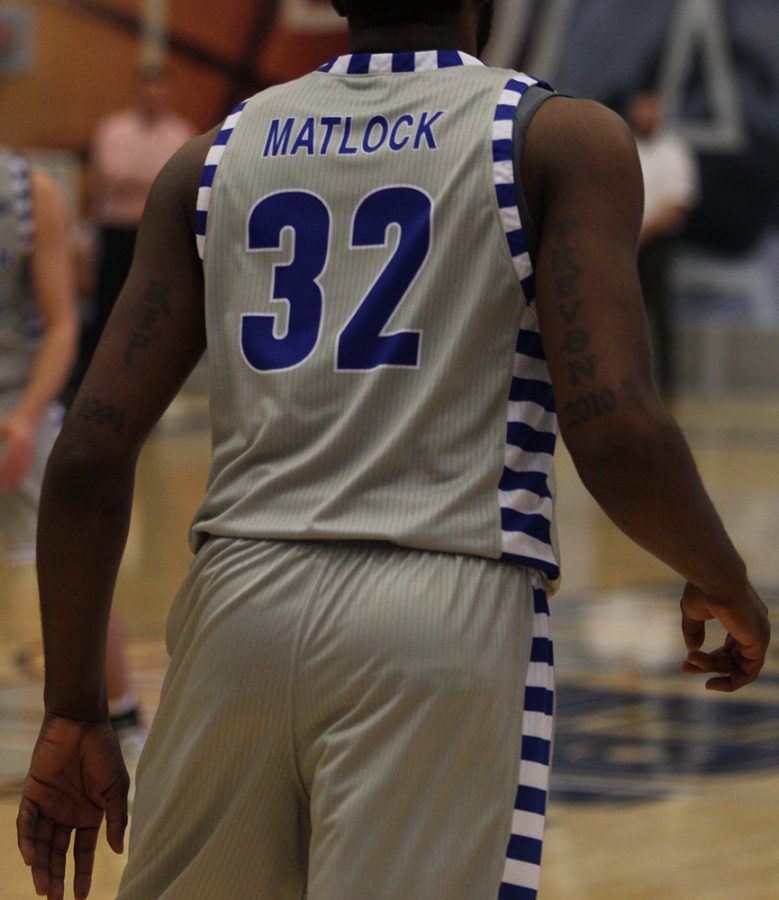 All three have those things imprinted on their skin forever.

When JaQualis Matlock is fighting inside the lane for a rebound or makes a basket during an Eastern men’s basketball game, you probably do not know the deeper meaning behind him looking up to the sky.

When Rade Kukobat shoots a free throw or any shot and you see roman numerals on his left bicep, you can look on Google to see that “MCMXCVII” is 1997, his birth year, but you may not know what the Serbian crest is doing across his chest.

And when you see Shawn Wilson dribbling the basketball, with a basketball on his left deltoid muscle moving along to each dribble, you would be wrong in assuming it just means he loves the sport a lot.

Matlock is a very reserved guy.

He usually has one of the most serious faces out of any Eastern player on the court, and he puts his head down and fights every minute on the court. Usually, he has the tough job of guarding the opponents’ bigger players and boxing out guys bigger than him for rebounds.

But when talking about his brother, Trevon, he had a smile remembering the times they had before Trevon died in 2010.

“He passed away from (Sickle Cell Disease),” Matlock said. “Every night I take the court, I carry him to watch over me and guide me through the games. So, pretty much I feel like I’m playing for him every night.”

When Trevon was five years old, the doctors told the family that he would not live past five, Matlock said. Matlock added that it was rough to watch his brother deal with the disease.

Matlock said Trevon was strong enough and fought well and lived until he was 16.

“I feel like if he was strong enough to fight that long, I’m strong enough do to everything for him,” Matlock said. “Pretty much, he motivates me to go hard every day.”

Sickle Cell Disease is a group of inherited red blood cell disorders, which includes sickle cell anemia, according to the CDC. Symptoms include the patient’s red blood cells becoming hard and sticky and becoming “C”-shaped like a sickle.

The sickled red blood cells die early, which causes a shortage of red blood cells. Those sickled cells can also get stuck in small blood vessels, clogging the blood flow and can lead to pain, infection, acute chest syndrome or a stroke.

Matlock remembers his brother with tattoos on his left and right triceps that, when read, say, “Rest in peace Trevon 1994-2010.”

“When I’m doing good, I just look up and smile knowing that he’s guiding me and watching over me,” Matlock said.

Like Matlock, Kukobat transferred on Eastern’s basketball team this season as a junior.

Eastern’s athletic website lists Kukobat’s hometown as Chicago, but his family moved to Indiana about two or three years ago.

Even then, his roots point to his true home being Serbia.

The tattoo that means the most to Kukobat is almost always hidden by an undershirt he wears under his jersey or by the jersey itself.

Kukobat has the Serbian crest on his chest, as well as the double-headed eagle that is featured on the country’s flag.

He also plans to get more tattoos with biblical meanings because he said he has God to thank for all the good and bad in his life.

Kukobat said there is no ridiculous meaning behind the tattoo on his chest, but he said Serbia is near and dear to him.

“I had to leave it because it was war-torn,” Kukobat said. “I was a war refugee when I was younger, so I had to get (the tattoo) first thing.”

Serbia was involved in the Yugoslav Wars that went on from 1991-1999, and Kukobat’s parents left Serbia and went to Germany, where Kukobat was born in 1997.

When Kukobat’s family got to the United States, they arrived in San Francisco, then moved to Oregon, then went to Wisconsin, and then Kukobat’s dad found work in Chicago, where he said he basically grew up.

“When you come here with nothing, and my mom knew English but my dad didn’t know English, and my mom had to take care of me and stuff like that, so when we first came here it was kind of tough,” Kukobat said.

Kukobat said he “definitely” wants to go back to Serbia in the future.

“Hopefully, if I’m successful enough, I want to give back not only to this university, but also to Serbia,” Kukobat said. “Help out the churches and all the people there that are in need.”

Wilson is now a junior on the men’s basketball team, but his freshman year, he was not on the team.

After joining the team last year, he got his tattoo.

The tattoo on his left deltoid is a way for him to always have that reminder of the sport he loves.

The Proverbs passage reads, “Trust in the Lord with all your heart, lean not on your own understanding. Remember Him in all you do, and He will direct your path.”

“(That) means, just trust the process,” Wilson said. “No matter how bad times are they’ll always get better.”

The tattoo is not just to show the fact that he loves basketball, but also to remember that Proverbs passage and the journey he had to get on the basketball team.

Matlock, Kukobat and Wilson are three different players on Eastern’s basketball team, from three different places, but all three have found a way to hold whatever is near and dear to them even closer by putting it proudly, in ink, on their skin.