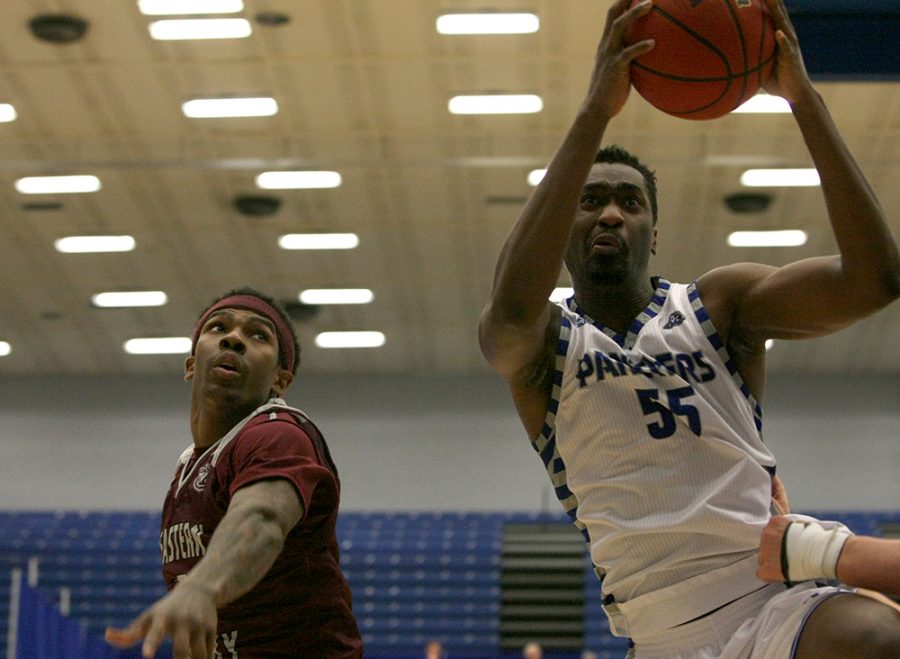 Eastern Kentucky gave the Eastern men’s basketball team literal fits during the first half of the two’s contest Thursday night, which ended in a 67-66 Eastern victory.

Once Eastern did get its offense set up, the Colonels would give high defensive pressure and caused the Panthers to commit 13 turnovers, compared to the Colonels’ eight.

The game was also very physical, as both teams entered the double bonus with 25 total fouls committed between both teams.

The height of the physicality came when Josiah Wallace drove to the lane, missed the shot and Spoonhour thought a foul should have been called.

Spoonhour yelled at the referees and continued to through a warning, earning himself a technical foul, which Eastern Kentucky’s Nick Mayo converted into two points from the following free throws.

Spoonhour’s actions must have gave his team a bit of energy, though, as Eastern went on a 12-3 run right after that to take a 29-28 lead.

Mayo is the second-leading scorer in the OVC, but he had a tough time getting going in the first half, only shooting 1-of-8 from the field and scoring five points, including 3-of-4 from the free throw line.

Mack Smith powered Eastern in the first half, scoring 13 points, including going 4-of-7 from three-point range. Cam Burrell also had a good first half, giving the Panthers a boost with eight points and five rebounds, including an emphatic dunk on a steal and fast break to close the half.

“After that steal, it brought a whole bunch of energy to me and the team,” Burrell said of his dunk. “The crowd got excited and I flexed a bit, it was fun.”

Despite taking the lead late in the half, Eastern still struggled at times with Eastern Kentucky’s press and close-guarding defense.

That tough defense came back to haunt the Colonels, though, as Eastern entered the bonus with 7:27 left in the half and the double bonus with 3:48 left in the first half. Eastern made 8-of-10 free throws from bonus chances.

The second half fared well for Eastern, as the team only committed five turnovers and Eastern Kentucky did not press and double team as much.

But like most of Eastern’s games this season, it went down to the wire and Eastern had to make clutch plays to squeak out a win.

Eastern trailed 66-64 with 2:13 left in the game, and Josiah Wallace made three free throws over the next two minutes to secure Eastern’s victory.

Mayo, who had averaged 23.3 points per game going into Thursday night, had a chance to give his team the win with three seconds left, but missed his shot attempt and Burrell grabbed the rebound.

Burrell was fouled, missed his two free throws (thanks to the double bonus) and the Colonels had one last chance with a second left but missed a running floater.

Smith lead Eastern with 17 points, Wallace scored 14 points, Burrell finished with his second double-double of the season with 10 points and rebounds each and Ben Harvey scored 11 points to round out Eastern’s double-digit scorers.

“Every night I just try to go out there and play hard,” Burrell said of getting another double-double.

Mayo finished the game with 15 points and 10 rebounds, but shot 4-of-19 from the field.