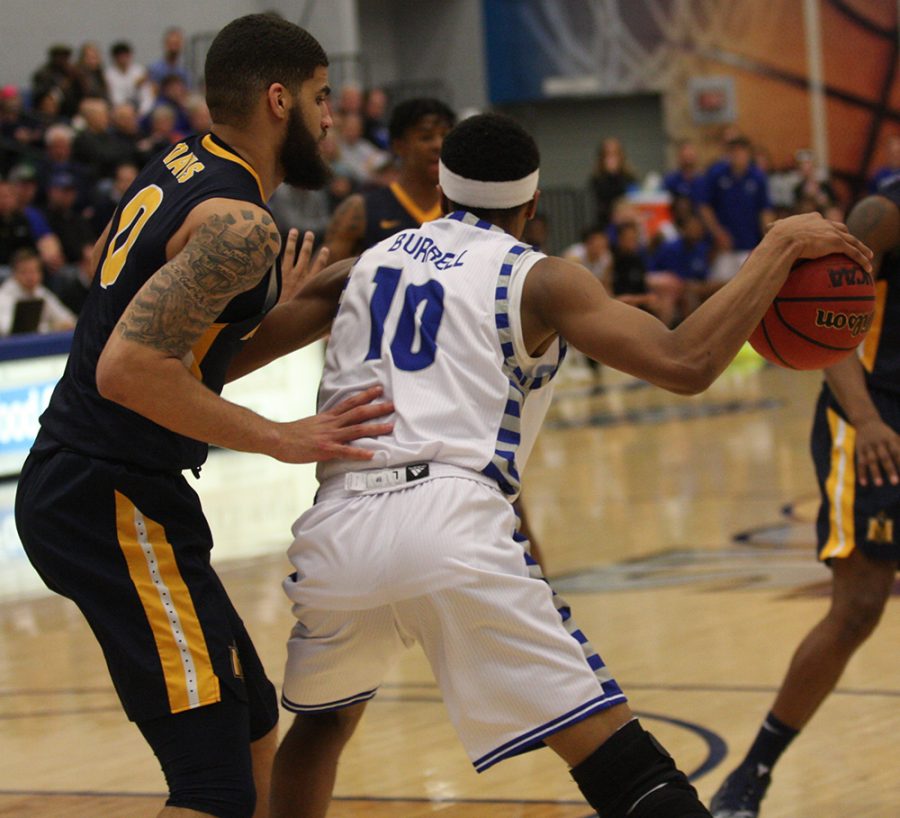 Eastern freshman Cam Burrell backs down a Murray State defender in the Panthers’ 83-61 loss to the Racers on Jan. 17. Eastern is 5-3 in the OVC and in sole possession of 5th place.

The OVC race broke wide open with both of the top teams falling in conference play while Eastern continues to tread water in the upper half of the conference.

Eastern (12-9, 5-3 OVC) managed to slide past Tennessee-Martin 66-64 last Thursday before falling to Southeast Missouri over the weekend by a 64-59 mark.

Despite the split, Eastern sophomore Josiah Wallace nabbed his third OVC Newcomer of the Week award after averaging 19 points and 5.5 rebounds over the pair of contests.

Wallace ranks 5th in the conference in overall scoring at 15.4 points per game and 8th overall in minutes per game at 32.

Eastern gets back on the horse against Eastern Kentucky Thursday at 7:30 p.m. before turning around to face Morehead State on Saturday.

The big showstopper of the week came from the preseason OVC favorite Belmont taking down Murray State 79-66 last Thursday.

The Bruins (15-4, 6-2 OVC) held Racers star Ja Morant to just 5-of-19 shooting from the floor en route to the victory, and the defensive effort as well as some quick offense from Belmont senior Kevin McClain gave him the nod for OVC Player of the Week honors.

McClain poured in 23 points against Murray State before coming back with 16 more in a comeback 96-92 win over Austin Peay just a few days later.

McClain is tied for sixth in the OVC in scoring with an average of 15.2 points, while his teammate junior Dylan Windler ranks third at 18.9 points per game.

After the win over the conference’s number one ranked team, Belmont was named NCAA Division I Team of the Week by the National Association of Basketball Coaches.

The Bruins take on Southeast Missouri Thursday at 7 p.m. and get a weekend slate versus Tennessee-Martin.

Morant managed 24 points and nine assists in the rebound performance, maintaining his spot atop the conference’s individual leaders for both points and assists per game at 24.1 and 10.5, respectively.

Murray State remains the top dog in the conference, but only thanks to a loss from Jacksonville State (15-6, 7-1 OVC) last Thursday against Eastern Kentucky.

The road matchup did in the first place squad as the Gamecocks stumbled to a 28-point first half deficit behind a 32-4 run from Eastern Kentucky.

Jacksonville State, like Murray State, also came back with a win of their own against Morehead State 77-71 this past weekend.

The Gamecocks and the Racers get to battle for the top stop in the OVC Thursday at 7:15 p.m.