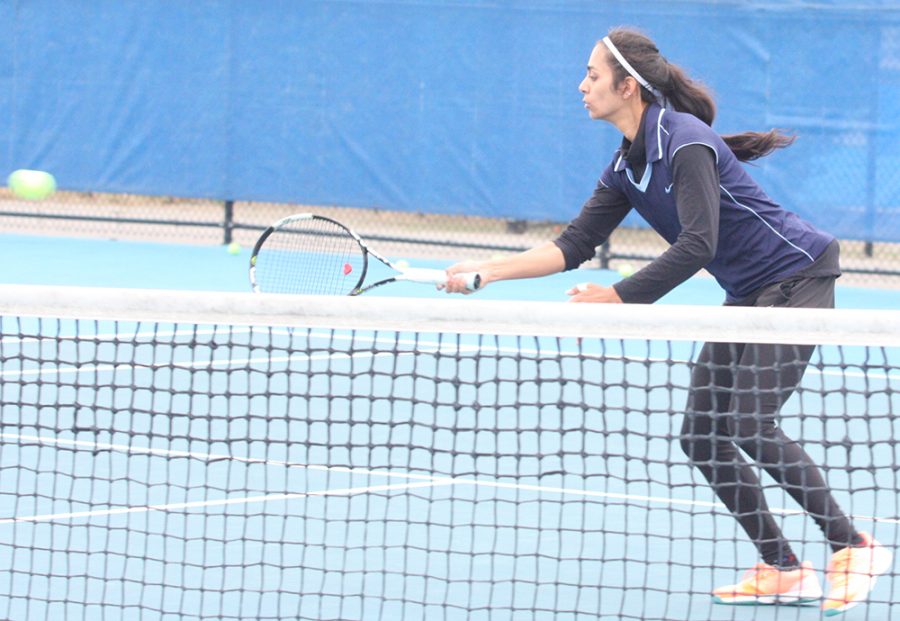 Srishti Slaria prepares to return a hit during the Eastern women’s tennis practice at the Darling Courts Oct. 14.

Eastern’s women’s tennis team strengthened their momentum by staying undefeated and bringing their team record to 3-0 this season.

The Panthers defeated Saint Louis University with an overall score of 5-2.

“First, thank God that we were able to pull the win. Everyone was out there fighting and doing their best. The clinch wouldn’t be possible without the other three wins,” sophomore Karla Contreras said.

Contreras said that going into the match the team knew everything they did would matter.

“We know that the wins come from doing the little things, taking care of our bodies, academics, make sure that we are practicing with purpose, and over all having a good time, enjoying the fight and, of course, bleed blue,” she said.

The biggest focus before the meet was to play aggressive and to improve in doubles play. The Panthers did just that winning two of the three doubles matches this weekend.

“For all of us I think it’s important to go out there and clinch the doubles point when we begin matches,” senior Abby Carpenter said. “Having that extra point really helps add to team confidence as we enter singles, which we did great this weekend against SLU.”

With sophomore Rachel Papavasilopoulos and senior Srishti Slaria at number one, the Panthers beat Saint Louis University’s pair of Alba Salinas and Ariana Rodriguez in a 6-4 set.

Papavasilopoulos would defeat Ally McKenzie for the first singles match in two sets 6-1. Slaria played in the second slot and defeated Rojo in three sets.

“I want to keep working on staying calm and keeping composure while still supporting my team as much as possible,” Papavasilopoulos said. “One of the things I do individually is try to visualize my matches the night before I actually play them, it allows me to feel confident and ready for the next day.”

Carpenter would lose to Rodriguez in two sets. Martin would play at the number four slot, playing in the last finished match. Martin fought hard and defeated Salinas in three sets, winning the deciding set 10-6.

“I’m going to keep working hard in practice to continue to build confidence,” Martin said. “During matches, I’m going to take one point at a time and focus on each point and not get caught up in outside factors. I think if I continue to play consistent, the wins will come.”

The team’s biggest goal all season has been to improve and continue to build momentum into the Ohio Valley Conference Tournament. These early results this spring will help in their ultimate goal to win the tournament.

“As a team, we want to continue our momentum by playing relaxed and with confidence,”
Martin said. “I think if we all support each other and continue to play competitively, then we will continue playing well.”

The women’s tennis team will travel to Peoria to play Bradley University Saturday at 2 p.m.
“Our focus this weekend should be around building one another up in matches, with cheering and support,” Carpenter said. “That extra energy we can give each other will make all the differences in individual wins, which will lead to our team succeeding as a whole.”