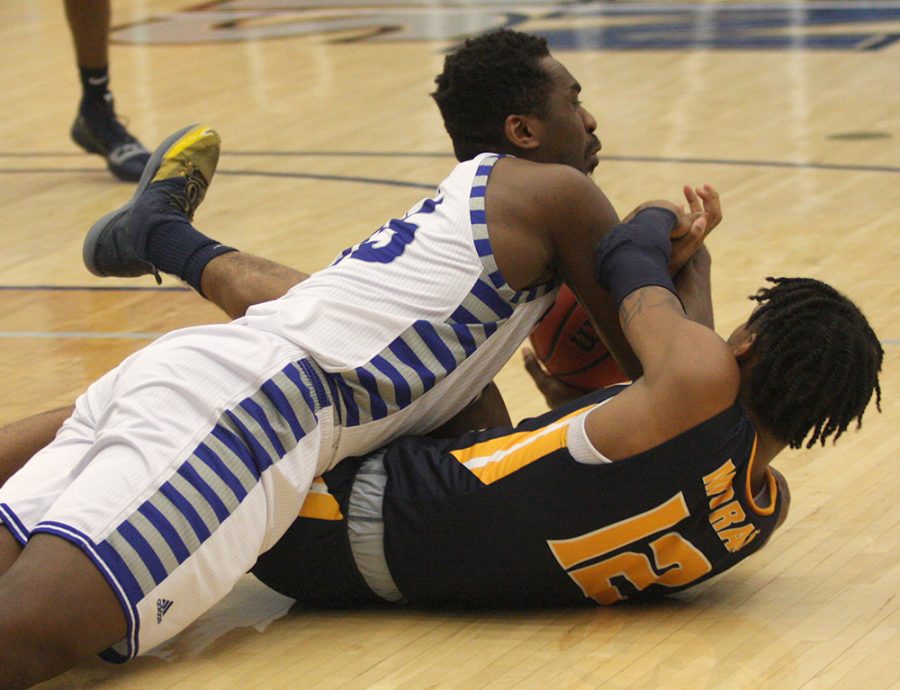 Eastern’s Aboubacar Diallo fights with Murray State’s Ja Morant for a loss ball last Jan. 17 in Lantz Arena. Eastern is 4-2 in the OVC in third place behind Murray State and Jacksonville State.

Eastern managed to steal a conference upset win late last week, but now it’s the top dog in a matchup tonight with Tennessee-Martin.

Tennessee-Martin (5-12, 0-5 OVC) is still searching for conference win No. 1—losers of eight straight—as they host the Panthers, and the team will have its hands full of hot scorers.

Eastern sophomore Josiah Wallace shot 10-of-15 for a season-high 27 points including a perfect 5-of-5 from the three-point line in a win against Austin Peay on Saturday, while fellow sophomore Mack Smith got into the action with 18 points of his own.

It was junior Shareef Smith who stole the show in the Saturday slate, though, despite being the third-leading scorer on the team with 12 points.

A go-ahead bucket with four seconds left lifted Eastern past Austin Peay to dethrone the Governors from their co-leading OVC spot.

The Panthers, now fifth in conference, will need that sharp shooting to keep up with Tennessee-Martin, as the Skyhawks average 76.8 points per game, 4.2 more than Eastern this season.

That scoring has come from a variety of sources from Tennessee-Martin this season as five different players on the team average double-figures.

Although the Skyhawks average more points, Eastern still boasts a higher three-point percentage as a team, clocking in at .377.

The Panthers’ issue this season has been finding easy buckets, though, as their total field goal percentage ranks third-to-last in the conference at .421.

Scoring is not the only aspect of the game that secures wins, however, as Tennessee-Martin creates plenty of second-chance opportunities with its 12.5 offensive rebounds per game figure, 1.7 more than Eastern.

The Panthers lack of height underneath the basket has caused some of those rebounding and scoring woes, but there’s good news for them in this one: Tennessee-Martin is in the same boat.

The Skyhawks’ only player above 6’10” is sophomore Minfeke Sanoe who averages just 5.6 minutes per game in 10 games played.

Tennessee-Martin’s blocks leader this year, junior Quintin Dove, comes into the game with just 12 rejections in 359 minutes on the season, compared to Eastern’s leader Aboubacar Diallo with 18 in 159 minutes played.

Coming to the aid of Diallo defensively will be freshman Cam Burrell who has slowly worked back from injury.

The rookie has logged only 190 minutes in 11 games played, but his length and quickness could be a focal point in creating fast break opportunities for easy scores.

After the Thursday night meetup, Tennessee-Martin hosts Southern Illinois Edwardsville on Saturday at 3:30 p.m. while Eastern hits the road to take on Southeast Missouri at 4:30 p.m.