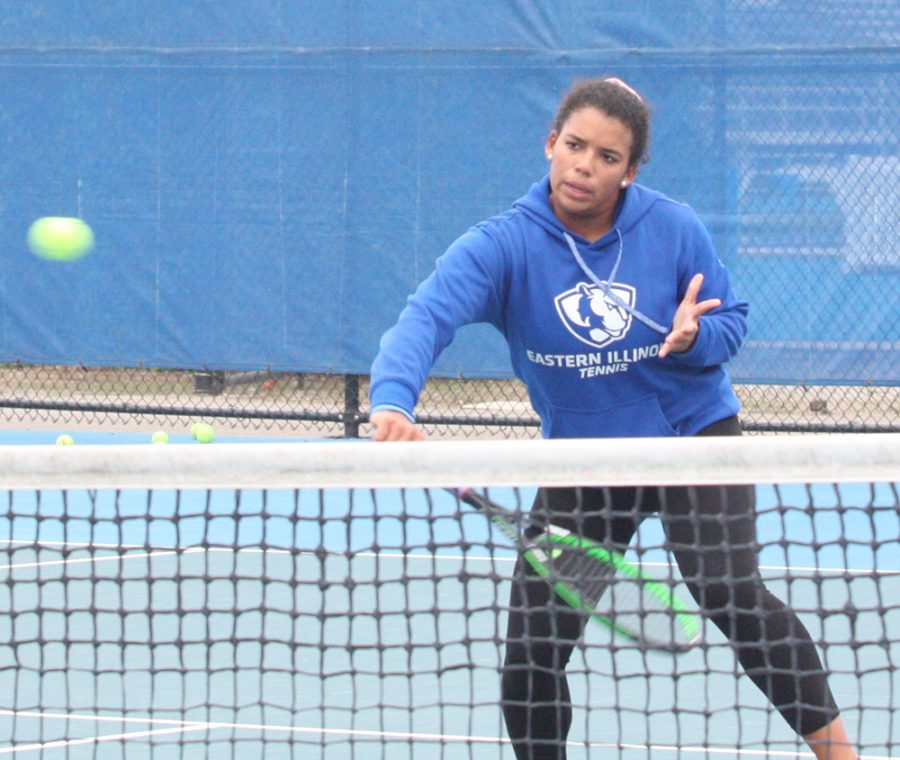 Karla Contreras gets ready to return a ball during the Eastern women’s tennis team’s practice at the Darling Courts Oct. 14.

The results were exactly what the team wanted to start off spring play and continue the momentum of this season.

Director of tennis Chris Tolson said this is a great start to the season.

“We want to use this early portion of the season to work on different parts of our game and really build our confidence as we go,” Tolson said. “We have a lot we can improve on still, but I am proud of this team as they had all had a great attitude and effort on court this weekend. I am excited for us to keep building and see where this season takes us.”

The team started the weekend off sweeping all three doubles matches against Judson University.

Papavasilopoulos would also defeat Garza in their singles match as well. Winning it in two sets of 6-0 and 6-1.

Carpenter would play Banda in  singles as well defeating her in two sets 6-1 and 6-0.

“I felt we all went out there with positive energy as a team and performed well,” Carpenter said. “We all felt confident as a team and in doing so secured a lot of wins. It always feels good to win, so I was glad I was able to capitalize on the opportunities I was given. I didn’t over think anything and played well, which I was happy about.”

Sophomore Claire Martin put what she learned from the fall play and offseason to work. Martin helped win two doubles matches, won both of her individual matches on four 6-0 sets, and clinched the second team match against Olivet Nazarene.

Martin said after seeing the results, she wants to continue to push herself on the court, in the weight room and in the Student Recreation Center.

“All of those things start to add up in a positive way, so I’ll definitely continue to improve my fitness and my mental and physical game,” Martin said.

The women’s tennis team will travel to O’Fallon, Ill. to compete against St. Louis University. The Panthers will play their meet at the St. Claire’s Tennis Club at 2:15 p.m. Sunday.

“Going into our (Saint Louis) match this weekend and all the others, we need to make sure we all come out aggressive at the very beginning of matches,” Carpenter said. “We have a lot of good competition ahead and showing we are a threat from the very first point can help set the tone of the rest of the match.”