Hundreds of students show for service 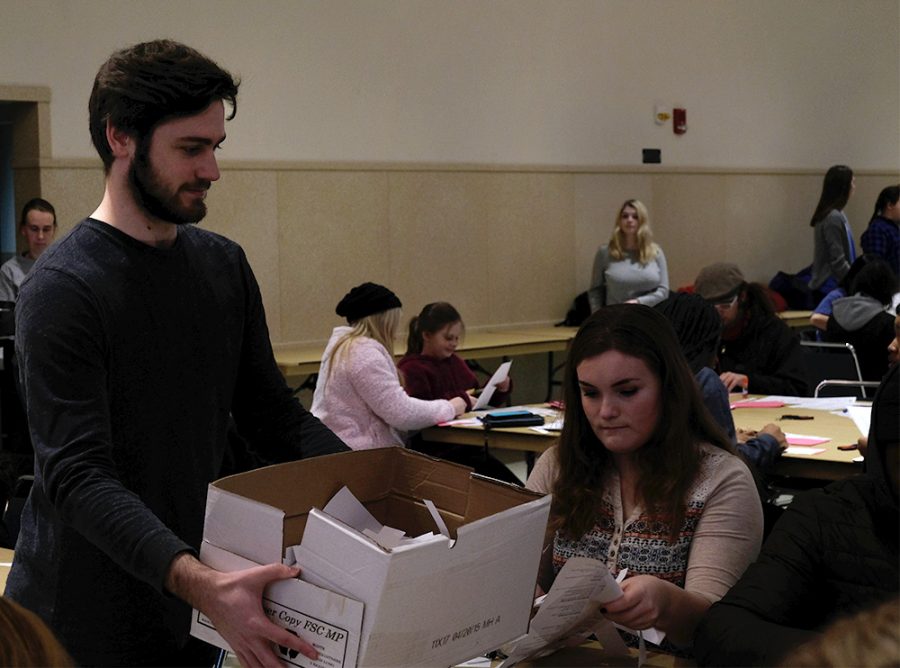 Will Taylor, a student worker at the office of Civic Engagement and Volunteerism and a junior human resources major, collects the scrapes leftover from the recipe books volunteers were making at the Martin Luther King Jr. Day of Service Monday afternoon at the University Ballroom.

Over 200 students gathered on- and off-campus to perform community service for the Martin Luther King Jr. Day of Service Monday afternoon.

Beth Gillespie, interim director of the Office of Civic Engagement and Volunteerism, said this is just the beginning of events the office offers students to give back to the community.

“We’ve got people volunteering six days a week,” Gillespie said. “We just ask that they come back and see us so we can keep doing good throughout the semester.”

The students worked for two hours on their projects, in total giving more than 400 hours of time to the community.

“It doesn’t have to take a ton of time to give good to the greater community,” Gillespie said.

Students who volunteered on-campus wrote postcards for prospective students, made cookbooks for the local food pantries and made blankets for One Stop Community Christmas.

Off-campus projects varied from helping distribute food to families in need and sorting donations to helping seniors in the community with technology.

Students were able to sign up individually and as groups.

“I think overall, it shows Charleston, Mattoon and the surrounding areas that Eastern does do things for (them),” Murphy said. “It might seem small and only be two hours out of our day, but it’s going to make a big impact on people.”

Damian Perez, a junior construction management major and member of the fraternity Sigma Phi Epsilon, said he thinks volunteering in groups can make it more enjoyable.

“You have other people with you,” Perez said. “It gives us sense of brotherhood and makes us closer.”

“I think it’s just a good way to get everyone to (be) involved,” Hickerson said. “It’s a good community builder. I like being here with people.”

Many people at the event felt it was a nice tribute for Martin Luther King Jr., who was being celebrated around the country Monday for his life and achievements for civil rights.

Murphy said she enjoyed volunteering in honor of MLK Jr.

Annie Garner, a graduate assistant who helped organize the event, said it was important to have the Day of Service on Martin Luther King Jr. Day.

“It’s our way as Eastern students of giving back to EIU and its community, that we are a part of while we’re here,” Garner said. “It’s important for us to be heard and seen as students who are making a big difference.”

Gillespie said the volunteering was the perfect way to honor King’s life.

“(King) spent his entire life giving back, being an advocate for others and giving selflessly of himself,” Gillespie said. “(Volunteering) is the perfect way to honor the work that he started.”