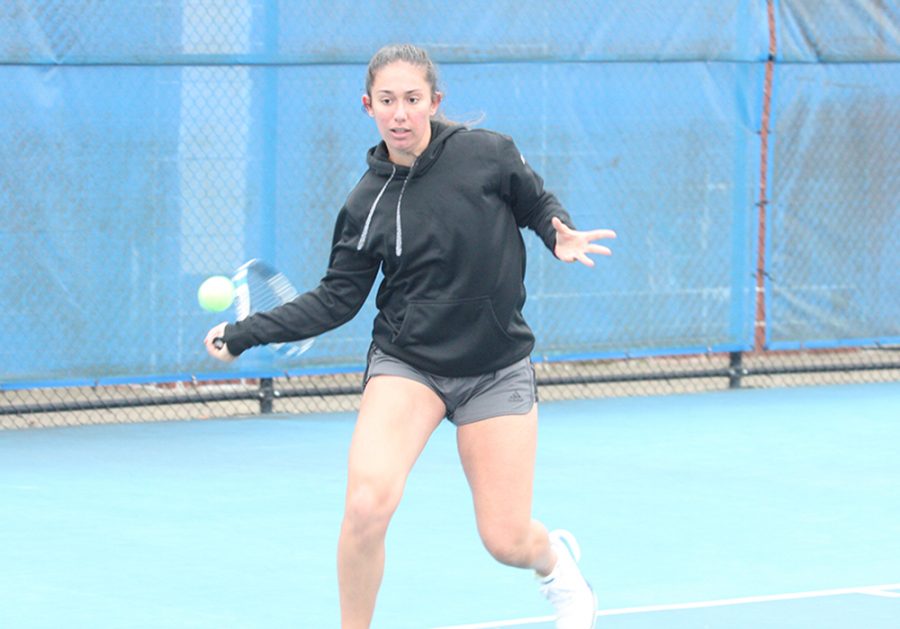 Eastern sophomore Rachel Papavasilopoulos returns a ball in a fall practice at the Darling Courts. Eastern travels to play Judson University and Olivet-Nazarene on Saturday.

The Eastern women’s tennis team turned in a good start to its 2018-19 season in fall play behind their first year coach, Chris Tolson. The fall season play ended at the end of October, but this team has been hard at work, gaining more momentum to their ultimate goal: competing for and winning the Ohio Valley Conference Championship.

“This off season we really focused on conditioning and making sure we were still putting in extra time to hit, even if unregulated by a coach,” senior Abby Carpenter said. “My expectations are to dominate both matches this weekend and for every individual to pull out wins. We all are confident and excited to begin.

Junior Claire Martin had a similar thought to Carpenter on the team’s hard work ethic this offseason.

“During the off season at school, I continued to work with Chris and Michael with the other members of the team to continue to improve our game in terms of fitness and strokes,” Martin said. “Then over winter break, I played tennis and worked out almost everyday in order to come back in great shape for the beginning of the season.”

This weekend starts off the spring half of their season. For the two seniors, Carpenter and Srishti Slaria, this is their last chance to compete for Eastern. Although the goal of any athlete is to win as much as possible, there are also a time to be cherished and enjoyed.

“For my last season, I really want to go out and enjoy every moment I have left on court,” Carpenter said. “I cherish all my time I spend with my team on and off court, and can’t wait to kick off another great and final season.”

During the fall half of the season, the team went a combined 26-24 in singles play. That record does not hurt anything when it comes to preparing and working hard this spring.

“All of our pre-conference matches help  build momentum as we continue into conference time,” Carpenter said. “Once conference season hits in March, we will all be prepared and in prime tournament shape because of all the prior competition.”

The Eastern women’s tennis team will begin its spring half of the season on Saturday, Jan. 19 against Judson University and Olivet Nazarene. Both matches will be held at the Park Forest Tennis Club in Chicago.

“I hope that we all go into these first two matches with a positive attitude, play relaxed and feel like we have worked hard,” Martin said. “If all of those things happen, I think we’ll have a great weekend.”