Column: Threes are fine, but inside scoring is necessary for victory 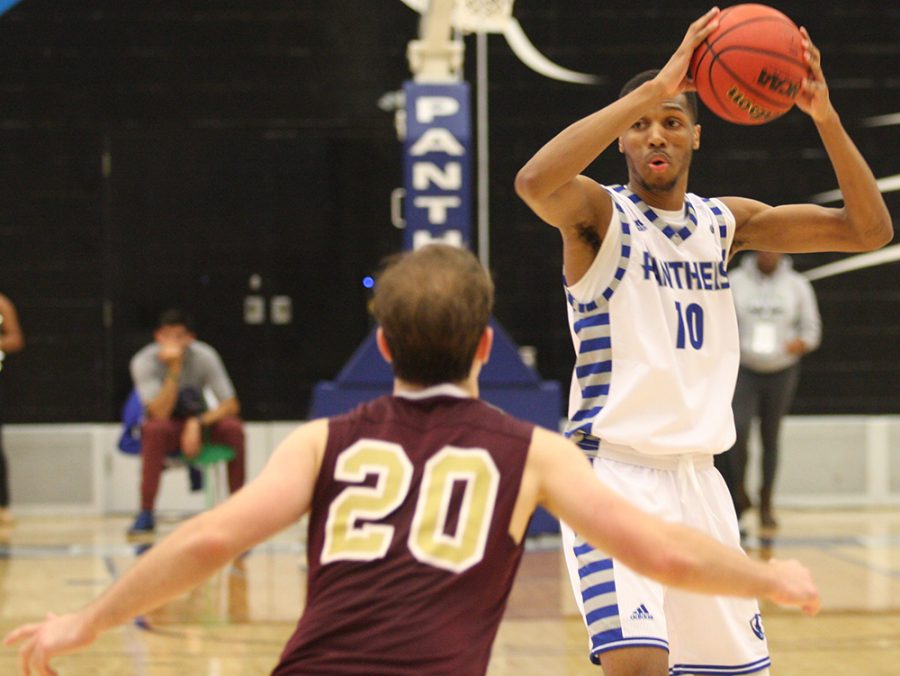 Cam Burrell looks to pass the ball to an open teammate during Eastern’s 79-44 victory over Eureka College in an exhibition match in Lantz Arena Nov. 2.

The most telling statistic for the Eastern men’s basketball team is its three-point shooting.

Whichever case it is, the three-point shot will be the narrator in the team’s story of this season, and possible conference tournament run.

To not let one shot alone determine the success of a season, Eastern needs to make its inside game viable for the late part of the season.

Looking at the good, things are really great when the shots are going in.

During Eastern’s performance in the Battle of the Blue Ridge tournament from Nov. 23 to Nov. 25, in the Panthers’ first two games out of three (the two wins for the team in the tournament), the Panthers shot 46.2 percent from three-point range against Gardner-Webb and 42.9 percent against Arkansas State.

Individually, the Panthers have a lot of players who can light it up from three-point range and have already made impacts in separate games with their three-point accuracy.

And as a whole, Eastern fell to second in three-point percentage in the conference at 36.9 percent, just behind Austin Peay’s now-leading 37.2 percent.

When the long-range shots are not going in, however, Eastern has struggled to find offensive efficiency anywhere else on the floor.

In a blowout loss from Fort Wayne Nov. 28, who is a heavy three-point shooting team as well, Eastern traded three-pointers with the Mastodons for the first few minutes of play, but once Fort Wayne got hot and started to break away, Eastern went cold and finished the game at a 28.6 percent mark from three-point land.

Further back, against Western Illinois on Nov. 17, Eastern shot 28 percent from three-point range and narrowly won, 68-66.

What these games, and others where Eastern shot poorly from beyond the arc, allude to is the need for the Panthers to develop their inside game and fast.

The mark in the Western game is not terrible, and is pretty good to compliment good shooting, but if the outside shooting is not there, like it was not in that game, 26 points in the paint and Eastern’s average 13.6 free throws per game will not carry the Panthers to success against the better conference foes.

Not one Panther has proven themselves to be a big scorer inside the paint. Most points Eastern scores inside are from drives and cuts to the basket from its guards.

Eastern has the players to score inside, it is just a matter of doing so now.

Cam Burrell is looking great in this past month back from his knee injury, averaging 6.14 points per game, mainly from scoring in the paint.

Aboubacar Diallo is making an impact defensively, grabbing rebounds and blocking shots well, but only averages 1.7 points per game. JaQualis Matlock has a lot of promise to be a threat inside, but needs to be more assertive down low.

Getting players to score consistently inside is a necessary component of Eastern’s game that it needs to find right now, as the conference schedule is getting tougher.

Even if the Panthers are making outside shots and are neck-and-neck with an opponent during a game, having a consistent big man to toss the ball inside to every now and then is a good way to catch the other team off guard and get easy points.