Column: Eastern women’s basketball team far from out of race after bad week 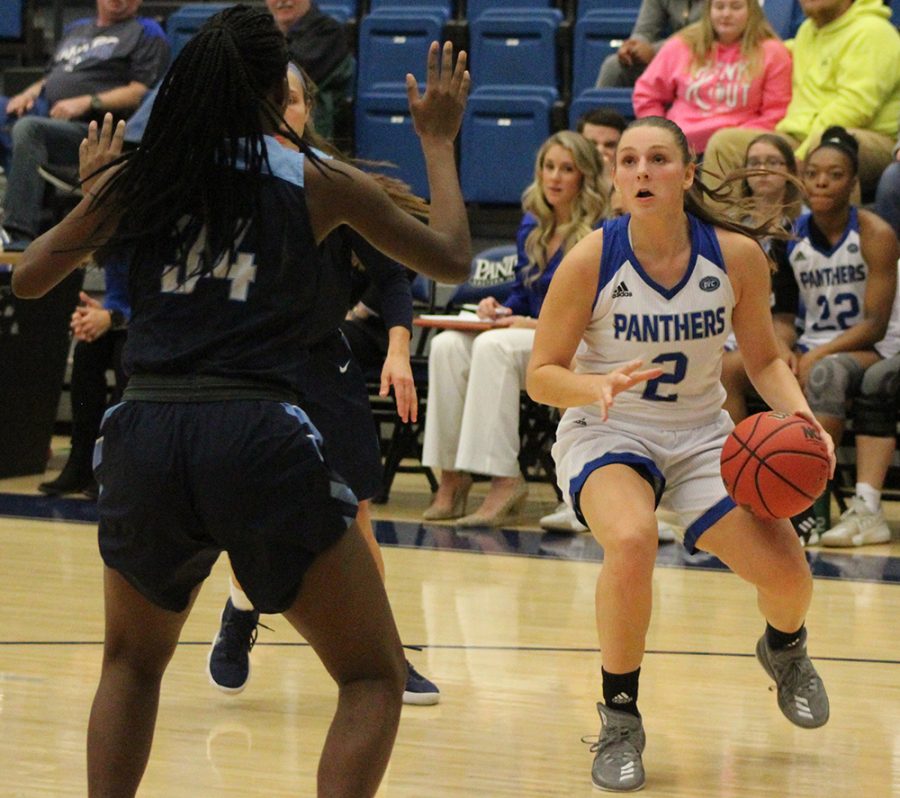 Jordyn Hughes eyes up a defender as she dribbles the ball during Eastern’s 102-43 victory over Oakland City in Lantz Arena Nov. 6.

Last week Wednesday I wrote a column illustrating how the Eastern women’s basketball team was no longer a rebuilding program and had finally arrived to be big players in the conference tournament. It has been six days, and that article, admittedly, already has not aged well.

The Panthers were 7-6 (1-1 in OVC) and winners of three of their last four games at the publication of that article. The defense was ranked second in the OVC, Tennessee Tech had just upset Belmont and sent the conference into a frenzy, and Eastern truly was playing some really good basketball.

Eastern has been beat by Jacksonville State and Tennessee Tech since that article ran and in those two games gave up a combined 181 points, and the defense is now ranked fifth instead of second, and Eastern is in 10th place in the conference.

It is looking right now like my article might have been a hot take inspired by a three-game winning streak and a Tennessee Tech upset of Belmont. But stubborn is as stubborn does. Despite the Panthers’ most recent games, I am going to take the next 400 words or so and try to defend my stance that Eastern will be a tournament team come February.

Eastern has an excellent chance to do just that beginning on Thursday against Murray State. Murray State was predicted to finish last in the conference in the preseason poll but has gotten off to a 2-2 conference start this season. The Racers may not be quite as bad as people predicted them to be, but they are certainly a team Eastern should be able to compete with if they really are as good as I wrote them off to be.

A game with Austin Peay, another 2-2 OVC, will follow the Murray State match, and that game certainly falls under the same category as Murray State. It’s a game that Eastern will have to play well in to show it can hang with the middle-tier teams in the OVC.

I don’t want to sound like I am making excuses for the team, but against Jacksonville State the Panthers were without leading scorer Karle Pace.

While Pace alone probably would not have made up for the 78-49 margin that Eastern lost by, her presence in the game, particularly in the third quarter, may have changed enough to keep the score closer.

And the third quarter of that game was a whole other anomaly in itself. Eastern was outscored 31-4 in that quarter. 31-4. You could take an entire season of OVC basketball and count on one hand the number of times a team gets beat in a quarter by a margin like 31-4. That quarter was so bad, such an outlier to how basketball is normally played, that it should just be ignored all together when evaluating this Eastern team. It should probably just be treated like it never happened at all.

The Tennessee Tech game brought a whole load of crazy itself to the Panthers.

Eastern scored 88 points, the most in a conference game since February of 2013. If just given that figure, it would be crazy to think the second-ranked defense in a conference would somehow lose that game.

But it just so happened that during that game Tennessee Tech’s Jordan Brock decided to put on a shooting performance that would make Steph Curry tip his cap.

Brock scored 33 of Tennessee Tech’s 99 points on 8-of-15 shooting from three-point range. Have a day.

When a player decides to go off for a performance like that, there is little anyone can do to stop it. So, for Eastern, it is probably safe to just bid Brock and company a good day and take this loss for what it is.

I am not saying that Eastern will win the OVC or upset Notre Dame at any point this year, but even after the team’s last two games, I would still argue they will be playing in the conference tournament.