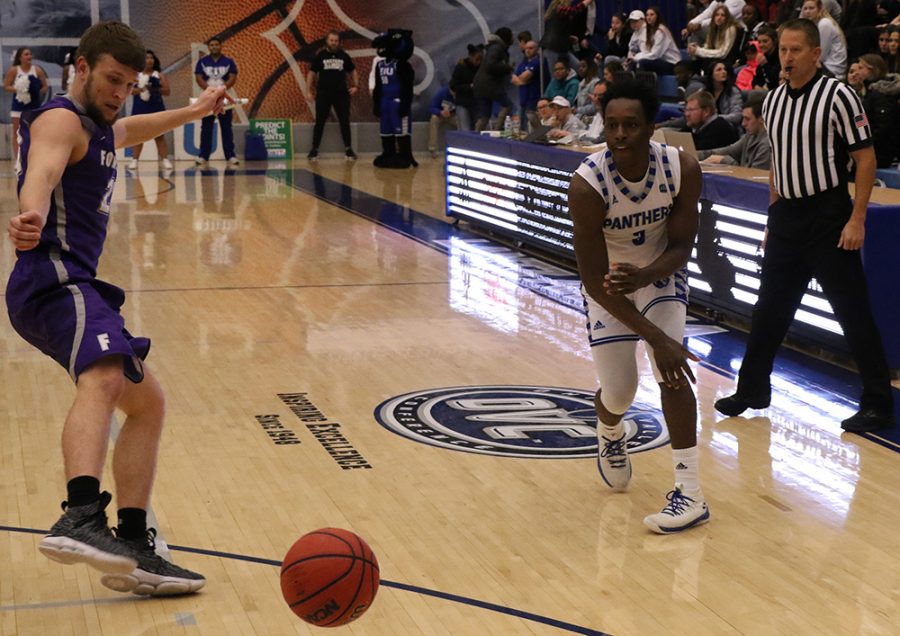 File Photo | The Daily Eastern News Mack Smith makes a bounce pass as a Fontbonne University defender tries to kick it during Eastern’s 90-37 win in Lantz Arena on Dec. 4.

Like every conference game thus far, the Eastern men’s basketball team had a close finish against Tennessee Tech Saturday, winning 67-60.

In each of the Panthers’ first four conference games, Eastern has either won or lost by an average 5.75 points.

Also just like the first three conference games, Eastern had back-and-forth possessions and scores in the game, and trailed for a bit before eventually taking and holding on to the lead.

The third conference win for Eastern was a rough one, as the Panthers shot 37.5 percent overall, 26.3 percent from three-point range.

“(Tennessee Tech) is big around the basket and they don’t give you much,” said head coach Jay Spoonhour. “I thought we settled for difficult shots early in the game, but we did better as the game went on.”

Scoring inconsistency is something Eastern has dealt with at times this season, and it was something the Panthers dealt with throughout the rest of the first half, scoring in little spurts.

The bulk of Eastern’s scoring in the first half came with four and a half minutes left before halftime.

At that mark, Ben Harvey made a layup to bring Eastern within eight, 23-15, as Tennessee Tech started slowing down with its scoring after its outburst in the first part of the half.

Malik Martin and Jared Sherfield made back-to-back shots within 14 seconds of each other for Tennessee Tech, giving the Golden Eagles a 27-15 lead, but they would not score again for the rest of the half.

Instead, the Panthers closed the first half with a 10-0 run to only be trailing by two points at halftime.

Josiah Wallace and Shareef Smith would each add a bucket of their own, along with two free throws by Harvey and his two baskets.

Wallace would then combine with Mack Smith to grab Eastern its first lead almost three minutes into the second half.

After a couple lead changes, Eastern took the lead permanently with 12:10 left, when Cam Burrell made a fast-break dunk.

The Golden Eagles stayed within five points or less a couple times throughout the remainder of the game, but Eastern officially secured the game when Shareef Smith made a three-pointer with 2:16 left, giving Eastern a 60-51 lead.

The closest Tennessee Tech would come after that point was a six-point deficit.

Eastern is currently tied with Belmont for second in the conference with 3-1 OVC records, behind three first-place teams who are unbeaten in conference.

The Panthers have one of their toughest stretches of opponents this week, as they host Murray State Thursday and Austin Peay Saturday, both of whom are perfect in conference play so far.

“This week’s games will be the toughest back-to-back we’ve had,” Spoonhour said. “It’s a big week. I think the fellas are looking forward to it.”