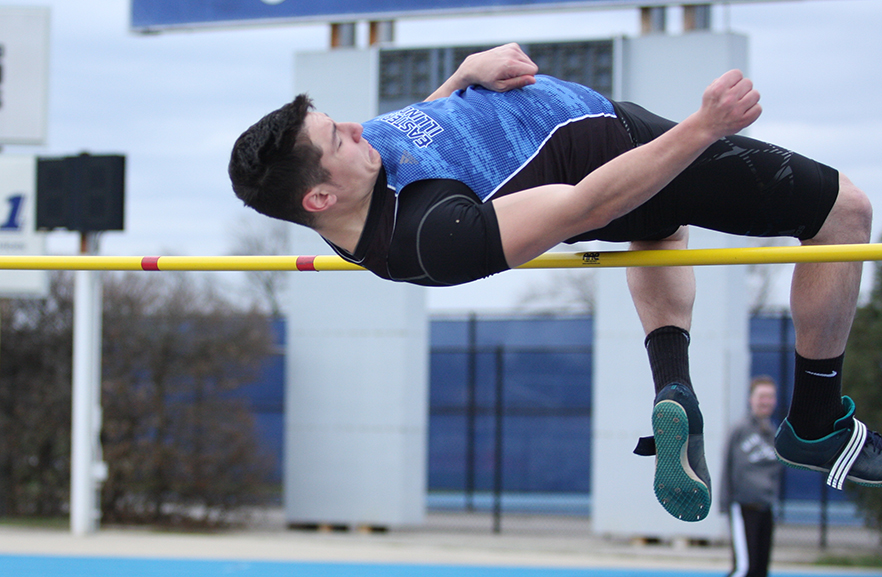 Senior Ashton Wilson jumps in a meet last Spring at O’Brien. Eastern travels to Illinois on Saturday to compete in the Illinois Intercollegiate Indoor meet.

The Eastern Illinois Track and Field team began its first meet of the indoor season with 11 first place finishes at the EIU Early Bird Meet. The team is looking to keep the momentum and results going the same way when they head to Champaign for the Illinois Intercollegiate Meet.

“This first meet is really just a test to see where our fitness is at, so I don’t have any time goals,” sophomore Maggie McPherson said. “I just want to compete well and be aggressive; if I do that, then I should have a good idea of where my fitness is at, which will give me a good base for the rest of the indoor season.”

This year’s team has already begun differently than in recent years. Tom Akers retired after leading the program for the last 24 years. In the offseason, Brenton Emanuel became just the third director of track & field in the  NCAA Division I history of the Eastern program.

“Coach Emmanuel has already had such a positive impact on our team. I don’t get to spend a lot of time with him because he mostly works with the sprinters, but he puts a huge emphasis on the team being a family,” McPherson said. “It’s easy for track teams to separate into different groups, but Coach E. has made it clear he wants us to act like one as a whole, and if we do that, then we will work better together as a team.”

“He’s also just really supportive and motivating. He came to a lot of our cross country meets in the fall, even when they were hours away,” she added. “I’m really confident that we will have a strong track team this year and for years to come because he has already recruited so many new athletes. We’re so excited to have him.

“My main goal for this weekend is to stay focused and aggressive. Although I know not to expect a PR, I still want to compete with the rest of the women in the field and push myself just the same as I would any other race,” McPherson said. “Anything could happen and I don’t really know what to expect from myself even though I know I’m in good shape, so keeping a positive mindset is also important.”

Last year at the Illinois Intercollegiate Meet, the Panthers only had five first place finished throughout the whole meet. Coming off the momentum of the EIU Early Bird Meet, Eastern is looking continue their success into Champaign.

The Track and Field Team hope to keep their momentum going into their next meet. The team will compete in the Illinois Intercollegiate Meet at the University of Illinois in Champaign, Ill. on Saturday, Jan. 12 at 10 a.m on the field and 12 p.m. on the track.