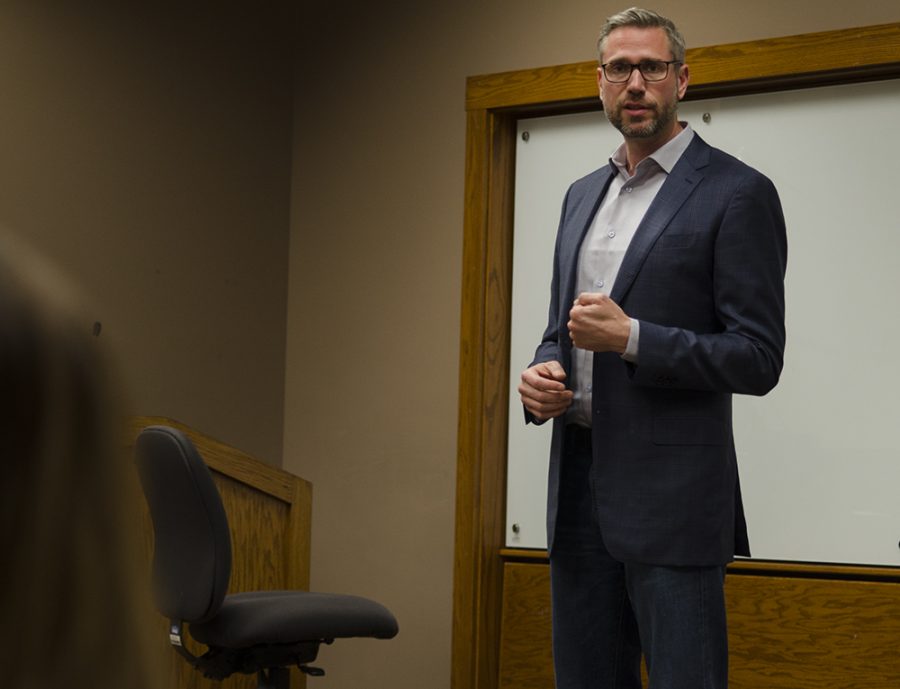 Illinois State Treasurer Michael Frerichs spoke to students, faculty and community members Friday during his visit to Eastern. The Political Science Association hosted the event and invited Frerichs to come.

Michael Frerichs, recently re-elected for his second term as Illinois State Treasurer, gave a talk Friday evening about his career, his life and the current state of Illinois.

Frerichs started his college career not with the intention of becoming an elected public official but as a German studies major.

“I grew up in a small farming community, went out East to school where I majored in German studies. I used that experience to go to Taiwan, where I taught English and learned Chinese,” Frerichs said. “I came back home, I worked as a paralegal in a large corporate law firm, and then I started an engineering company. I ran for county board …  then I became the Champaign county auditor, state senator (then) state treasurer.”

Frerichs said although this path is not the typical one, he found he learned a lot of skills through his diverse background that still help him to this day.

He said his advice to students wishing to hold office one day is to find their own way there.

“There’s not one path to office,” Frerichs said. “I don’t recommend anyone follow my path to office; you have to follow your own way, and that is by finding things that challenge you and interest you.”

Frerichs said that he has seen, in his experience, that liking whatever you do is more important than following a set path.

He said college students should find something they love, whether it has to do directly with their future goals or not, and they should throw themselves wholeheartedly into it.

“I went out for the rowing team (in college), and that took a lot of time. I don’t use that in my current job, but I learned a lot about myself by doing that,” Frerichs said. “I learned to push through limits, I learned things about teamwork, I made friends who helped me in the future. I would say that experience was helpful in me being treasurer, but ¼ I didn’t do it because it helped me succeed in office.”

He said that being state treasurer is the “best, most misunderstood” office in government.

His job deals with investing money for the state and, according to https://www.illinoistreasurer.gov, his office currently manages approximately $30 billion.

He said one of the most important strides he has made is his unclaimed property program which, according to the website, helped return a record-breaking $180 million in forgotten cash and stock to individuals, employers and nonprofits in FY 18.

“I think coming into it a lot of students weren’t really sure, they hear treasurer and think, ‘Oh, that’s math,’ but I think he really made it relatable for all of us,” Gordon said. “I, going in, didn’t know much about what a treasurer even did, as a political science major I should probably know more than I did, but I think I learned that he does a lot for every average American.”

Melinda Mueller, chair of the political science department, said Frerichs’ varied background allows him to connect to students in a different way.

“I thought (the event) was really exciting,” Mueller said. “I think he has such a broad background and a broad sense of interests that he can relate to all different kinds of students.”

Gordon said she thought a lot of students associated with his unconventional path to his current job.

“A lot of people realized that, in order to be a politician, like he said, you don’t have to go to law school, you don’t have to follow any particular steps, you can really just follow your passions,” Gordon said. “That’s another thing he really touched on is that you really should just do what you feel like you’re meant to do and your passion will follow.”