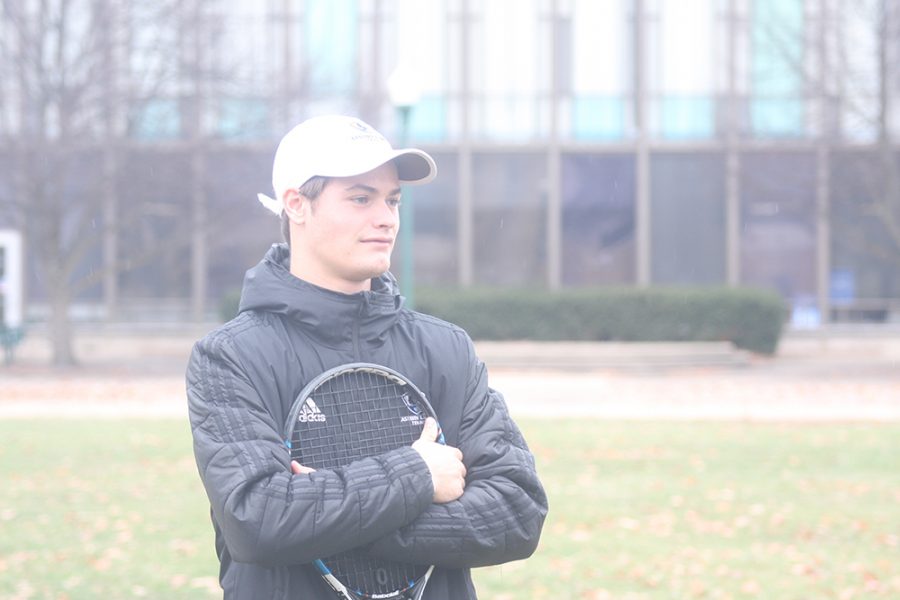 Sophomore Mike Jansen stands in the quad at Eastern holding his tennis racket. Jansen is from the Netherlands he was ranked in the top 20 in the Netherlands for juniors 18 and younger.

Coming into the school year, the Eastern men’s tennis team was without a coach.

Previous Interim Director of Tennis Sam Kercheval had accepted a job at Notre Dame, so the Panthers had four returning players and four new recruits.

One of those recruits is sophomore Mike Jansen. Jansen is a native of Sint-Oedenrode, Netherlands where he previously played his freshman season at Tilburg University.

Jansen was no joke when coming to Eastern. He was ranked in the top 20 in the Netherlands in Juniors 18 and under. Jansen’s highest ranking in men’s open tennis was 109 in singles and 106 in doubles play, while also playing club matches at the second-highest league in the nation.

Jansen was a multiple sport athlete in high school, one of those being tennis and the other being soccer. He came to realize, as he got older, that he had to focus on one sport.

Evidently, Jansen plays tennis today because of his father who also played D-I tennis at Armstrong University, which is no longer in existence. It wasn’t until Jansen was 15 that he started focusing on tennis in hopes to play somewhere in college. And when Jansen got to the United States it was a lot different.

“The train ride from the Union Station to Mattoon was a longer train ride than it is to get around my entire country,” He said. “The cities, the airports and the culture are much different as well.”

Jansen knew when he asked his dad to help him evolve as a tennis player that it was going to be challenging. At first, he only practiced one or two times a week, but he knew the work that needed to be done.

“When I was 15, I started practicing more and more and for people who know tennis, if you started at 15 you have to change a lot,” Jansen said. “These last four years it’s mainly been changing my technique because I had to catch up with the guys, and now I think I’ve caught up and I’m able to play at a decent level.”

There was a very good chance that Jansen could’ve played at Eastern last year, but he wanted that extra year of practice to be able to compete at a high level in a D-I program. Back in the Netherlands, Jansen only knew that he was on his own.

There was no “team” behind him. When he came to America, he never knew tennis was a team sport.

“I was kind of nervous,” Jansen said. “I was tight in my matches in the beginning because there’s a lot of shouting. You’re there playing with your friends and you want them to win, and that’s also different.”

What helped Jansen adapt to the culture of tennis in America was believing in his skill set to overcome the obstacles along the way to compete as a D-I athlete.

He noticed when the team traveled to the Illinois State Fall invite that all his teammates were relaxed and not tense. For Jansen, he said this helped him open up more during the match which helped his confidence through the rest of the invite.

Originally, during the recruiting process, Jansen had his eyes set on Eastern, but during the budget impasse in Illinois, Eastern couldn’t offer Jansen a scholarship.

Promptly, this made Jansen commit to Bucknell University in Lewisburg, Pennsylvania. It just kept getting worse for Jansen because Bucknell made a mistake within his transcript, so he chose not to go.

So, being that late in the game, with about five weeks before school started, Jansen elected to go to Eastern even though he knew nothing about the school. In fact, three days before Jansen arrived at Eastern, Kercheval called him and said he will no longer be the head coach of the team.

“From all I knew, I knew one guy coming in,” he said. “We have no seniors, we only have juniors, and I’m like what’s going to happen. (Kercheval) asked me if I was still coming to Eastern and I said, ‘Yes because you recruited me, but I’m staying because I think EIU can provide me with what I need, and I’m happy I made that decision.’”

It wasn’t the start Jansen would’ve hoped for, but what helped him was the current juniors, Braden Davis, Freddie O’Brien, Gage Kingsmith and Logan Charbonneau, helping him adapt and showing him around the campus and making him feel at home.

Specifically, Jansen doesn’t prefer a big or small school. To him, it’s about getting the college experience no matter where you go.

Jansen said when he walks on campus it’s cool to see some people he knows and sometimes he doesn’t know, which could help him get to know more people. Jansen doesn’t have a car on campus, but he said everything is within walking distance to get around and he likes the campus environment.

“We’re close with them. They really help us out,” Jansen said. “I’ve never had a real coach before, so to have a coach and with them being out at matches they can always help me to become better.”

And knowing O’Brien and Kingsmith are from different countries, that’s also helped Jansen with his transfer to Eastern.

“We’re a real team,” he said. “Everyone loves each other, we work for each other, which is really helping us out becoming a better team. Our team also has very good chemistry, and that will help us out for the rest of the season.”