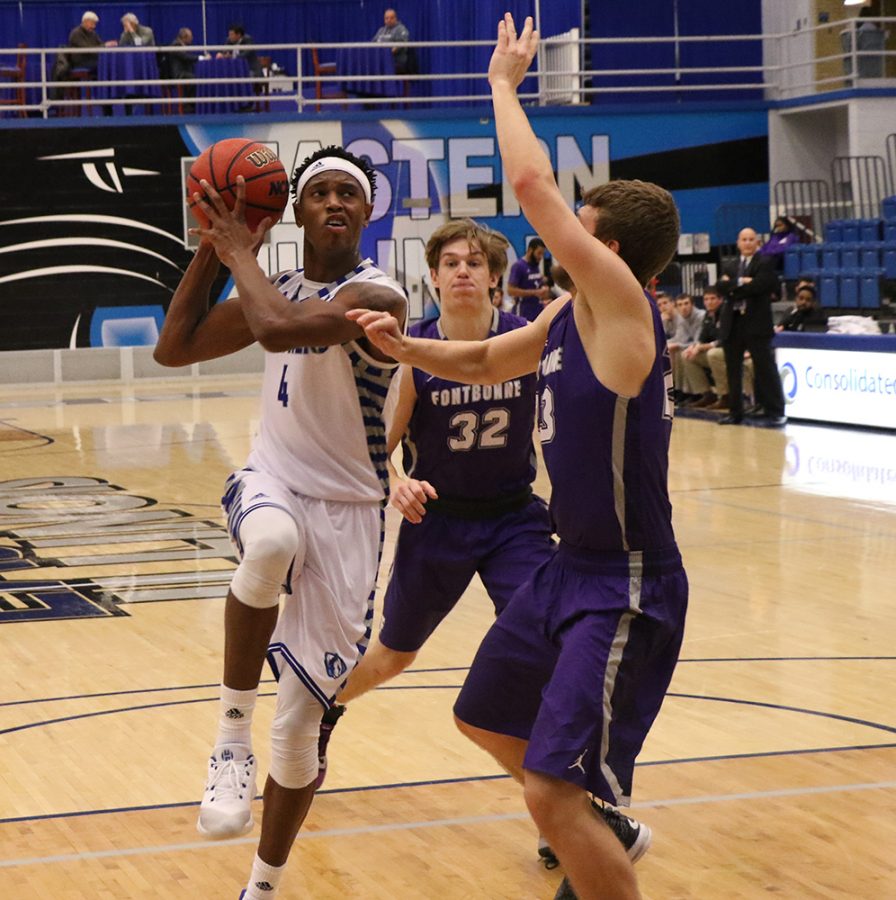 Eastern forward Edwyn Brown goees up for a layup in the Panthers’ 90-37 win over Fontbonne on Tuesday. Brown plays football and basketball at Eastern.

Fort Wayne dominated Eastern’s men’s basketball team on Nov. 28 and held Eastern to just 60 points in a 104-60 blowout victory for the Mastodons.

Edwyn Brown only logged one minute in the game, which was the first minute he played this season. And he only scored one point.

In the grand scheme of the overall game, the one point had no impact on Eastern or Fort Wayne; it just changed the numbers of the score on the scoreboard and in the statistics sheets.

But that point meant a lot to Brown.

“Coach Spoon told me before the game, he was like, ‘Get ready in case I put you in.’ And that’s what I was,” Brown said. “I mean, I didn’t get in until there was a couple minutes left in the game, but it meant a lot that he actually put me in.”

Brown is a sophomore academically, but a freshman on the basketball team since he did not play last season. There was no real reason that he did not play last year, he said, he just did not ask head coach Jay Spoonhour if he would be able to. So he played in the rec center.

But going into the Fort Wayne game, Brown had only been able to attend a couple of the basketball team’s practices because he was still busy with finishing the football season.

Brown is a two-sport athlete at Eastern, something he wanted to do since high school, and it means a lot to him to be able to play two sports.

“I did it all throughout high school, so my mom just told me to keep an open mind when coming into college, so I did, and coach Spoon gave me a chance to walk on to the team, so I did,” Brown said.

Brown redshirted his freshman year for the football team, but made his mark this season, recording two interceptions and 55 overall tackles.

At Althoff Catholic High School in Belleville, Brown had eight interceptions and 19 tackles in his senior season on the football field, and on the basketball court, he averaged 10.5 points, 3.7 assists, 6.4 rebounds and 2.4 steals per game.

In fact, when Brown was looking at colleges as he was finishing high school, he knew that he could play both sports at Eastern.

“They told me that I could play basketball and football coming in,” he said. “That was basically a key recruiting factor in me coming here, because I could play both sports and to know that they actually would give me the opportunity to.”

The only time being a two-sport athlete hindered Brown in any sort of way was that football kept him from getting back in to a rhythm with basketball right away; otherwise, Brown said he has been able to balance both sports fine.

“Coach Spoon told me during the football season to just focus on football, and now, I’m still talking to some of the football coaches and they just told me to focus on basketball right now,” he said.

Brown got on the court for his second game this season in Eastern’s blowout 90-37 win over Fontbonne Tuesday, logging 16 minutes, one steal and five rebounds.

He did not score, but the game was a good opportunity for him to get more in tune with the team’s scheme and get more playing time. But one takeaway from that game, that Brown admitted, is that he is out-of-shape for basketball.

“It was ridiculous when I first came back,” Brown said. “But it’s been like two weeks now, and I’m starting to get back in shape, starting to get my rhythm back, and it’s just a process.”

But Spoonhour and the rest of Eastern’s players have helped Brown get back into a basketball mindset.

“They welcomed me with open arms,” he said. “It was pretty easy coming here.”