Column: Zone defense could be helpful for Panthers 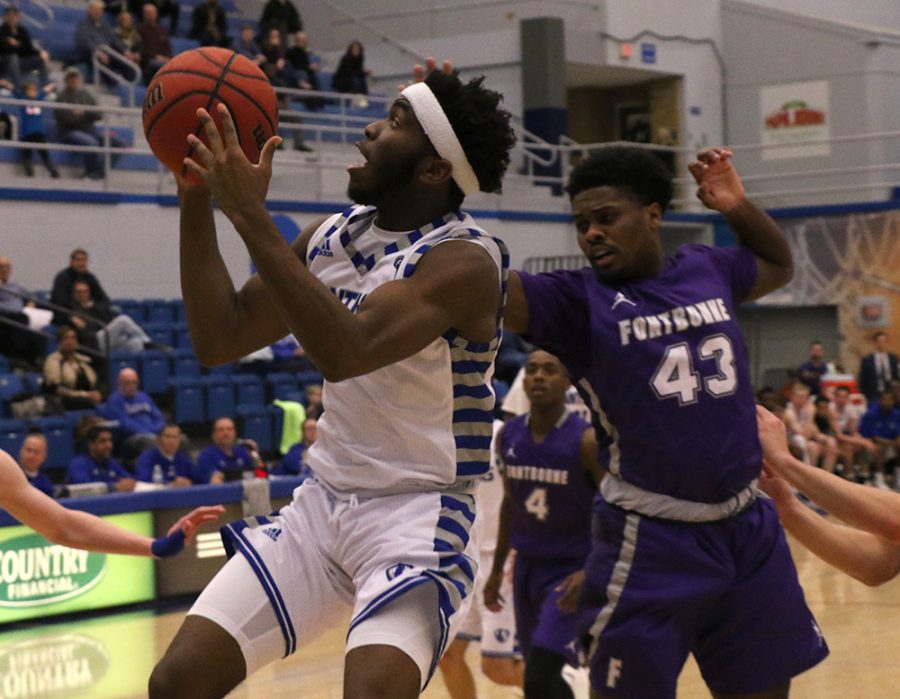 Eastern sophomore Kashawn Charles puts up a shot in Eastern’s 90-37 win over Fontbonne University Tuesday night at Lantz Arena. Charles had 21 points in the win that made the Panthers 4-5 this season.

Ever since Eastern’s scrimmage against the University of Missouri-St. Louis, before the preseason game versus Eureka College, the Panthers have struggled with keeping their marks in front of them and have let them drive to the lane too much.

Aside from that, Fort Wayne exposed a problem in Eastern’s defense where the Mastodons moved the ball so effectively and quickly that the Panthers were constantly in help defense and out of position.

Forward Braxton Shaw also mentioned before Tuesday’s game that the team is learning a new defense on the fly, which could be a factor.

But, based off the problems Eastern has run into, I think utilizing a zone defense could be beneficial for the team.

Against Fontbonne Tuesday, Eastern went into a zone defense once in the first half, in what, in the grand scheme of the overall game, had no real significance.

Spoonhour said that the team has used it all year after free throws, which is a good way to throw off teams. He added that he likes zone against some teams more than others, and that he wanted to play man against Fontbonne.

But I think the zone could be utilized more going forward, in preparation for those teams Spoonhour wants to play zone against.

The biggest piece of evidence, in my mind, that a zone defense would help is that big 104-60 loss to Fort Wayne last Wednesday.

A lot of times, a zone defense is used to prevent teams from getting into the lane easily and forcing them to take outside shots, which seems counterintuitive to what happened in the Fort Wayne game, when the Mastodons shot 21-37 from three-point range.

But by going to a zone defense, defending the lane could have been easier and could have prevented Fort Wayne from getting so many kick-out, wide open threes.

On top of that, the Mastodons had 14 offensive rebounds, which is part of a bigger deficit Eastern has this season in which they average two less rebounds per game than opponents.

Playing a zone defense would cement at least one or two Panthers near the lane a lot of the time, and Eastern has the size to play big inside and get rebounds.

Then, to confront the problem of staying in front of defenders, a zone defense helps the defenders not have to be just one-on-one all the time: other defenders can be near or trapping with them.

And while the Panthers have struggled at times with helping, or over-helping, a zone is easier to manage when defenders have to shift and help.

Take a 2-3 zone defense for example.

Two guards at the top can defend the whole length of the three-point arc, while also taking ball handlers one-on-one on the wings with baseline help and having the ability to trap the ball in the corner.

Even with two defenders trapping in the corner, the offense’s 4-3 advantage is not as great as it would be in a man-to-man situation because the three defenders still have structured zones to manage and can move around without worrying about switching marks.

The ball gets kicked out of the corner to the near wing or to the far wing on a cross-court pass, there are still enough defenders to shift over and give time for the others to get back.

Then there are still one or two defenders in the lane if the ball handler gets by the perimeter defense.

The zone is a more structured way for teams to help, in my opinion, and shift back into position, so it would be a perfect way for Eastern to confuse opposing offenses when they are rolling and getting easy buckets in the lane.

Forcing them to then have to get more jump shots is a big derailment of their offense and forces them to work harder to find holes in the defense and to find shots.

Especially if the team is learning a new defense on the fly, like Shaw said, and the opponent is scoring well, switching to a zone would inconvenience the opposing offense and give Eastern better chances for stops.

Especially with conference play starting in less than a month, I think getting a solid zone strategy down to be employed more would be a great tool for Eastern to have in its back pocket.