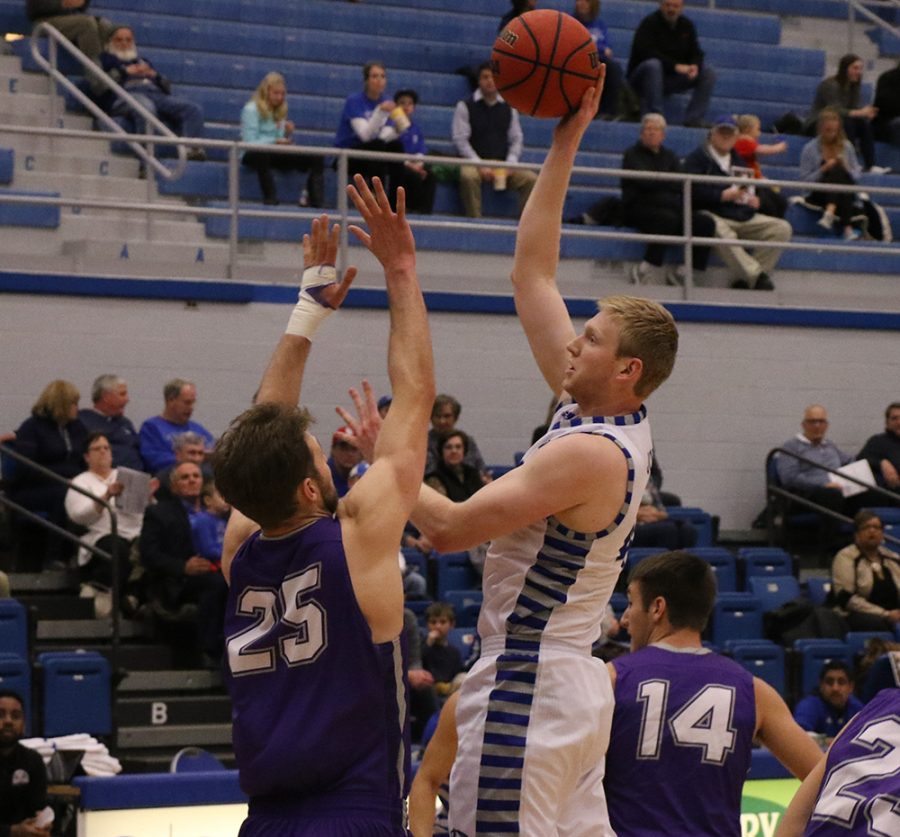 Eastern forward Lucas Jones puts up a shot in the Panthers 90-37 win over Fontbonne on Tuesday night in Lantz Arena. The 90 points was the most Eastern has scored in a game this season.

If there was one game that Fontbonne circled, underlined and highlighted on its schedule, it had to have been the one they played at Lantz Arena this past Tuesday.

The matchup was more or less a litmus test for the 3-3 Griffins, one of 10 teams in the Division III St. Louis Intercollegiate Athletic Conference.

Every athletic program, big or small, has at least one highly anticipated, marquee matchup on its calendar each year.

As it pertains to Eastern’s schedule, this season has featured disparities in the level of competition, be it against the Griffins this past Tuesday or the Longhorns back in early November.

The populace of Eastern, graduate and undergraduate schools combined, is about two times that of Fontbonne, a Catholic school in Missouri with an enrollment of just over 3,000 students, according to the latest figures compiled on the university’s website.

One of the oldest, most common canards in all of sports posits that teams like the Griffins stand a fighting chance against larger schools, such as Eastern, even though their enrollment and recruitment acumen fail to compare.

But most teams, Fontbonne included, understand how punitive their chances are of actually defeating Eastern or another Division I school.

Fans have opened up a special place in their basketball soul for the putative underdogs of collegiate basketball.  That may best explain the whole purpose of these gatherings: to present the fan bases and players of such teams with a gist of what Division I basketball truly entails.

The trip to Eastern gave its fans something to look forward to, despite what turned out to be a humiliating retreat that, some would suggest, began at the opening tip.

Most matchups on the Fontbonne schedule elicit little to no excitement.

No Griffins fan looked at Moody Bible, a team Fontbonne played in mid-November, and thought, “Wow, if only I could snatch a ticket to see a bunch of aspiring televangelists take the basketball court.”

Nor did its base of support watch the win over St. Louis Pharmacy with much enthusiasm either.

The Panthers boxed their opponent into a season low 37 points and, thanks in large part to a 21-point contribution from sophomore Kashawn Charles, were able to bury shots at a 61 percent clip.

Even so, the Griffins kept up their fight.

With the game firmly decided, and the Griffins down by 54 points, Fontbonne freshman Anthony Jones opened himself up to the contact of Eastern junior Logan Koch, who fouled him on the play.

Jones went one for two at the line, where he made the Griffins deficit a bit less embarrassing.

At the same time, how can it be embarrassing if the Griffins had no chance of riding out as victors to begin with?

The defeat pushed the Griffins below .500, but the loss will not be of consequence when the playoffs roll around, as only conference matches factor into the standings.

For one night, the Fontbonne fans could taste test Division I basketball.

Although the loss was rather difficult for the Griffins to digest, the chance at playing on a Division I court must have tasted pretty sweet for the fans and players alike.