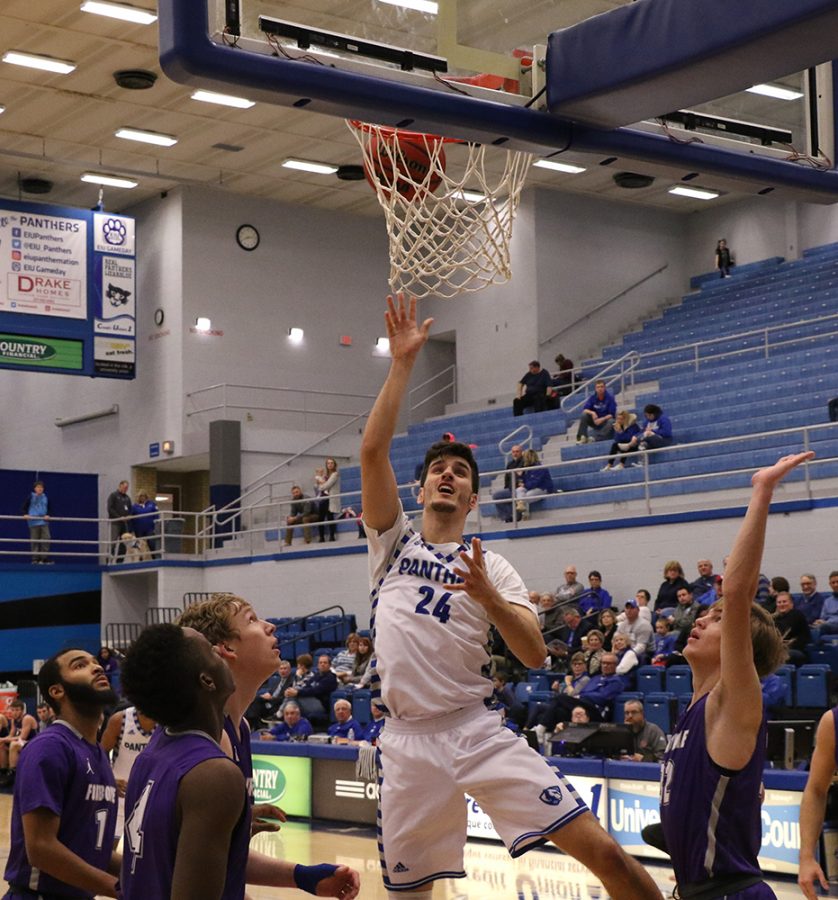 Rade Kukobat jumps for a lay in with four Fontbonne defenders watching during Eastern’s 90-37 victory in Lantz Arena Tuesday.

Nearly a week after a blowout loss to Fort Wayne, Eastern’s men’s basketball team decided it was its turn to get a blowout win.

It was apparent after the first three minutes of play that the men’s basketball team was going to dominate Fontbonne University, in what turned out to be a 90-37 victory for Eastern.

Eastern led 9-6, 3:17 into the first half, but Fontbonne would not score for the next eight minutes.

During that time span, Eastern went on a 14-0 run, until Gus Kleekamp made a free throw for Fontbonne to momentarily stop the Panthers’ scoring streak.

Kashawn Charles led Eastern during the run with five points, off a pull-up jump shot a few feet inside the arc and with a three-pointer from the top of the key.

For almost the entire game, any time Fontbonne would score a basket, Eastern would either match it or go on a scoring run of its own. The most Eastern led in the game was by 55 with 3:42 left in the game, 87-32.

Eastern had the advantage in size and speed, and, quite frankly, Fontbonne is a Division III school.

Charles led all scorers in the first half and finished the game with a game-high 21 points on 8-10 shooting, including 4-5 from three-point land. He also had a free throw from a four-point play.

Charles said, “I was just finding my shots. I wasn’t really searching for them; they just came to me.”

Head coach Jay Spoonhour said Charles can score and he knows how to get his own shots.

“Some guys can shoot, but they can never get a shot off,” Spoonhour said. “He knows where to go. He’s a good player and he’s going to help us.”

Two big things Spoonhour and the team focused on coming into the game was staying in front of defenders and playing better defense all around, and getting into the lane more on offense.

“I thought we concentrated pretty well (defensively),” Spoonhour said. “We have worked on it the last couple days, but we have got to stay in front. You can’t back off of people you have to pressure them.”

The Panthers have heavily favored taking jump shots in the last few games and have not gotten inside scoring well, but Eastern finished the game with 34 points in the paint, led by Matlock, who had 14 points all from inside scoring.

But getting into the lane better is what helped Eastern’s offense flourish, Charles said.

“I feel like we drove (to the lane) pretty good, got a lot of post touches, got it in-and-out,” he said.

Eastern’s next game is Saturday at 7 p.m., when the Panthers travel to Macomb in what will be a rematch game for Western Illinois, after losing to Eastern in overtime in Lantz Arena 68-66 on Nov. 17.