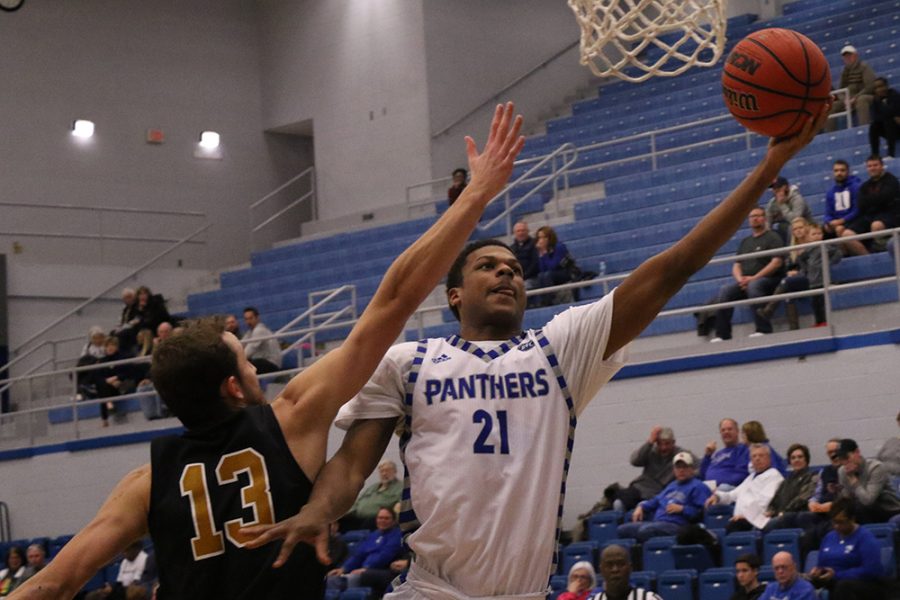 Eastern junior Braxton Shaw leaps for a layup in Eastern’s 104-60 loss to Fort Wayne on Nov. 28. Eastern lost its thirs game in a row Saturday against Chicago State 80-72.

One of the things Eastern men’s basketball head coach Jay Spoonhour said his team did too much of in a 104-60 loss to Fort Wayne Wednesday was rely on three-point shots.

So, going into Saturday’s game against Chicago State (2-8), Eastern (3-5) wanted to try to get better shots and move the ball more.

But Eastern ended up losing to Chicago State by a score of 80-72.

Three-point shooting was an issue for the Panthers again Saturday, as it was Wednesday night.

“I didn’t think our shot selection was too bad,” Spoonhour said. “We took what their zone gave us, but we didn’t get enough lay-ins.”

In contrast, Chicago State only took 12 three-pointers and shot 41.7 percent for the game.

Going into halftime, Eastern had control and led 41-32, after leading for almost the entirety of the first half (the Cougars tied the game twice).

At the half, Ben Harvey led everybody in scoring with 15 points off the bench, on 5-of-7 shooting (3-of-4 from three-point range). Harvey only scored two points in the second half.

Eastern led for the first 3:42 of the second half, but that was when Chicago State took the lead and only surrendered it for a minute in the rest of the game.

Over the time until the Cougars took the lead, they went on a 9-0 run.

Travon Bell started the run with a three-pointer, and 26 seconds later, Rob Shaw scored for the Cougars on a fast break to shrink Eastern’s lead to 46-43.

Shaw added a free throw a few seconds later to bring his team within two.

Bell was not done scoring during his team’s run, either, as he hit another three-pointer with 16:18 left that put his team into the lead.

Bell finished with 16 points as Chicago State’s leading scorer in the game, and Shaw was the second-leading scorer with 14 points.

Eastern was tied with Chicago State for a combined time total of a minute in the second half. Mack Smith made one of his three-point shots with 11:38 left in the game to tie the score at 56, and Cameron Bowles made a pair of free throws two and a half minutes later to tie the score and take the lead for Chicago State.

Josiah Wallace led Eastern in scoring, as he has been so far this year, with 18 points, and Harvey was the second-leading scorer with 17. Smith was the third-leading scorer with 14, and Kukobat scored 12 points, right around his season average, as the fourth Panther in double-digit scoring.

Shareef Smith led Eastern in assists with seven, and the team had 12 total, which is 1.5 marks above the team’s season average.

Chicago State dominated Eastern in the paint, outscoring them 40-22. They also outrebounded Eastern 35-30.

“The obvious problem that we have to get corrected is our defensive field goal percentage,” Spoonhour said. “We’ve got to stay in front of people better, force more contested jump shots.”