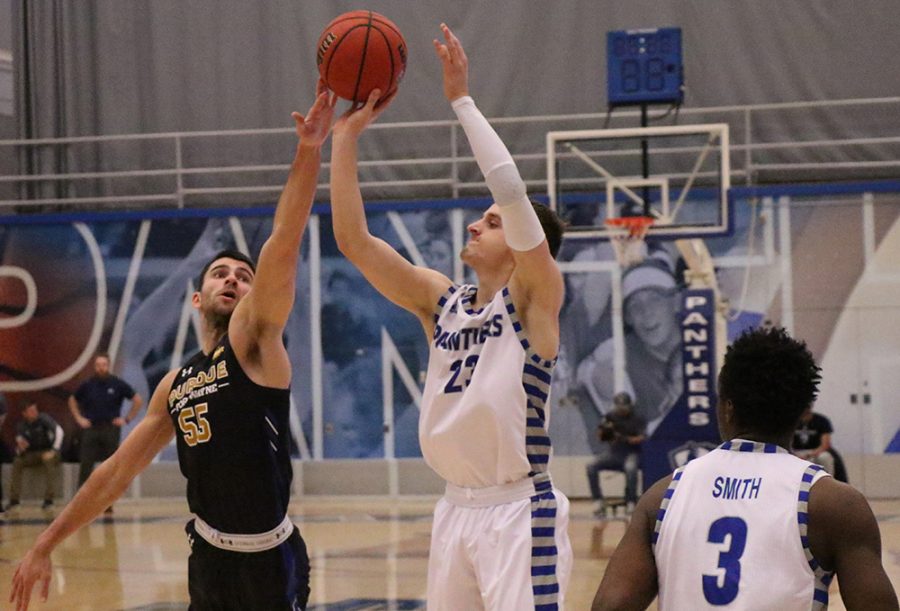 Ben Harvey attempts a jump shot with a Fort Wayne defender lunging toward him to block it during Eastern’s 104-60 loss Wednesday in Lantz Arena.

It was clear early on that three-pointers were the key for either Eastern or Fort Wayne to take the victory during Wednesday night’s men’s basketball game.

In the first half alone, the teams combined for 15 made threes, six for Eastern and nine for Fort Wayne. In the first eight and a half minutes of the game, two-point baskets seemed to be nonexistent as nine threes were made between the teams, 27 points of the then 20-14 score.

But while both teams were marksmen from three-point range, it was the Mastodons (5-4) who drew more blood in the shootout than Eastern (3-4), or, more accurately, what became Fort Wayne’s own personal shootout in a 104-60 Mastodon blowout victory.

“They did everything right, and we didn’t do much to stand in their way,” head coach Jay Spoonhour said. “The crazy thing was, it was a two-point game with four minutes left (in the first half), and the whole rest of the game was a run (for Fort Wayne).”

With 7:09 left in the first half and three minutes onward to halftime, a scoring drought soaked up the three-pointers’ mark on the game and Eastern was a point ahead of Fort Wayne, 26-25.

But with just under four minutes left, the Mastodons found their range again and ended the half on a 16-4 run, putting Eastern in the familiar position of trailing at halftime, like it has in every game so far this season.

The run started when Marcus Deberry hit a wing three to put Fort Wayne up two points. Deberry would hit another wing three-pointer with 48 seconds left in the half to cap off the Mastodons’ run.

In between Deberry’s pair of threes, John Konchar added three points on a drive and the and-one free throw, Dee Montgomery hit a wing three-pointer of his own and Kason Harrell had two layups.

Only Rade Kukobat and Braxton Shaw were able to temporarily put a hinge in Fort Wayne’s run, as both made baseline jump shots. Those were Eastern’s only four points in the last seven minutes in the half.

Aside from the obvious fact that Fort Wayne could not miss from three-point range, the reason they were able to make so many three-pointers was because the Mastodons were able to shift Eastern’s man-to-man defense around enough to get open looks.

Spoonhour said the Mastodons’ speed of play was what got the Eastern defense out of position a lot and gave them so many open three-point attempts.

“They attacked us from the minute they started playing, they brought it at a faster pace than we were ready for,” he said. “The entire time we were on our heels. We were constantly in (help defense).”

Eastern lagged behind the Mastodons throughout the half, having its deficit grow constantly over the course of the half. The Panthers made two threes in the second half, while attempting 12 in the half (8-28 overall).

Spoonhour said that part of what hurt Eastern was that they relied on threes too much, pointing out that relying on them is different than actually getting three-point shots from their offense.

As a team, Fort Wayne averaged 11.8 made threes per game coming into Wednesday’s game, and they only made 34.1 percent of their three-point shots.

Wednesday night was the second straight game Eastern’s opponent made a lot of shots and buried the panthers in too deep of a hole.

In Eastern’s last game of the Battle in the Blue Ridge tournament this weekend, an 82-65 loss to UNC Wilmington Sunday, UNCW made a lot of jump shots in the second half to extend its lead to as much as 26.

Kukobat and Ben Harvey were the lone Panthers in double figures, with 12 and 11 points respectively.