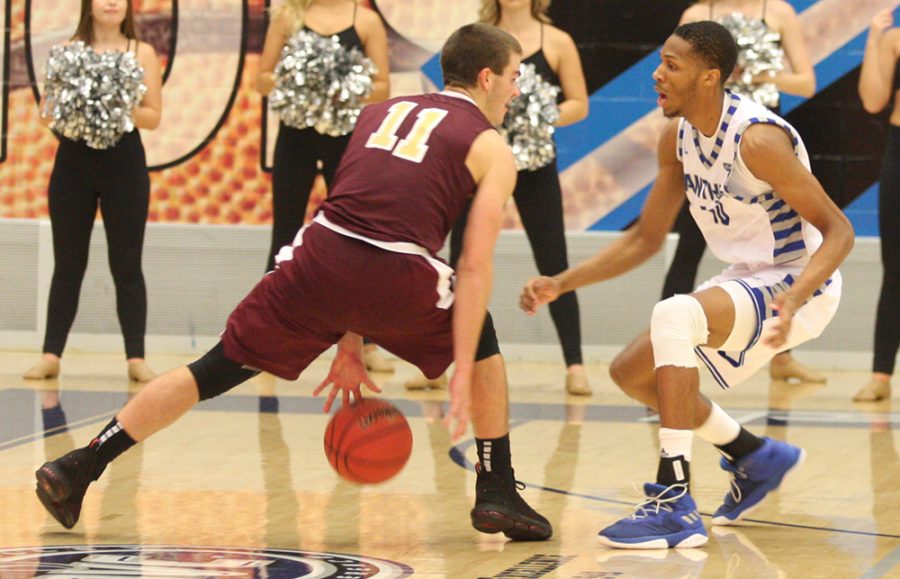 Eastern freshman Cam Burrell plays defense on an opponent from Eureka College in a 79-44 on Nov. 2. Burrell has played in just two games this season for the Panthers.

The two Ohio Valley Conference championship teams from last season, Belmont and Murray State, ride into week two of the season undefeated while Eastern hovers at .500.

After an 0-2 start to the season, the Panthers (3-3) rallied with two wins in three games at the visitcurrituckOBX.com Battle in the Blue Ridge tournament this past weekend.

Eastern took both wins in dramatic fashion, edging out Gardner-Webb 79-78 in game one before taking Arkansas State in overtime and securing a 90-86 victory.

The Panthers fell to UNC Wilmington on Sunday 82-65, but sophomore transfer Josiah Wallace was named OVC Newcomer of the Week for his efforts.

Wallace posted 24 points per game over the course of the tournament, nailing 12 of 21 three-point attempts and a game-tying shot with just 1.4 seconds on the clock to force the OT matchup with Arkansas State.

Eastern’s next contest will take place tomorrow at 7 p.m. against Fort Wayne.

Wallace was also nominated for OVC Player of the Week, but that honor went to Murray State sophomore Ja Morant, who recorded a triple-double with 29 points, 13 rebounds and 12 assists in a 77-66 win that moved the Racers to 3-0 on the year.

Murray State (3-0) takes on Prairie View this Saturday at 7 p.m. in the team’s fifth game of the year, but the OVC-rival Belmont squad has five games and five wins in the books already.

After a few tighter matchups in the first three games, the Bruins (5-0) managed two blowout victories last week, including a 104-50 downing of Trevecca Nazarene and a 91-53 win against Kennesaw State on Saturday.

Belmont lost to Murray State in the OVC Champion 68-51 last season to be denied of an NCAA tournament berth.

The Bruins take on Samford on Thursday at 6:30 p.m.

Alongside Eastern in the conference standings are three other .500 teams, including Tennessee-Martin, Eastern Kentucky, and Southeast Missouri.

Eastern Kentucky (3-3) notched one of its three wins on the season against Kennesaw by a 100-81 tally with the play of freshman Jomaru Brown, who was awarded OVC Co-Freshman of the Week.

The other Co-Freshman of the Week award went to Tennessee Tech freshman Hunter Vick after a 20-point night in the Golden Eagles’ first victory of the year against Louisiana-Monroe.

Tennessee Tech moved to 1-5 and faces Winthrop tomorrow at 6 p.m.