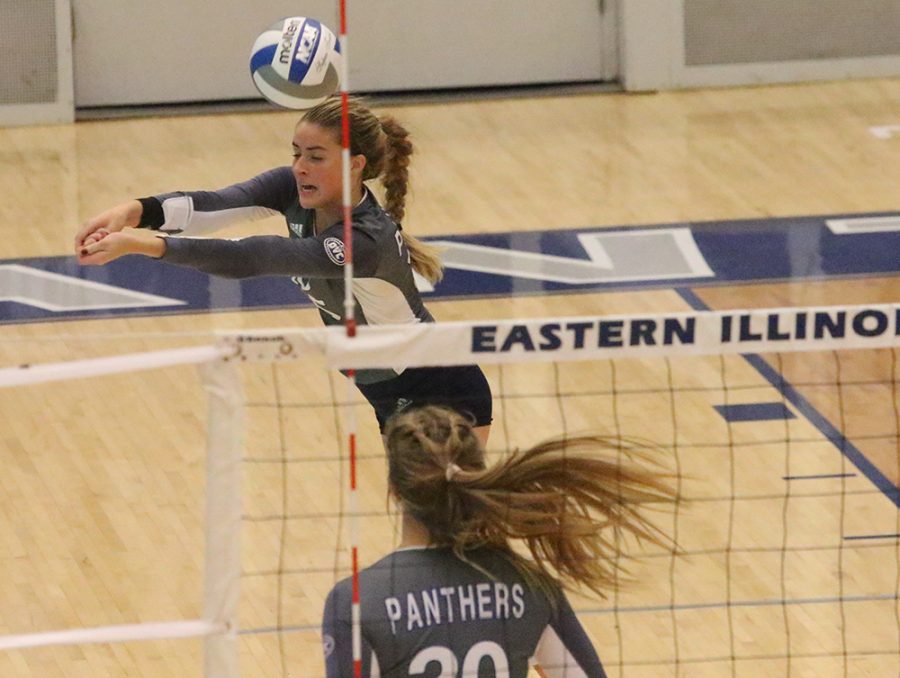 Laurel Bailey passes the volleyball to a teammate during Eastern’s 3-0 victory over Southern Illinois Edwardsville in Lantz Arena on Sept. 19.

The task of determining Eastern’s place in the Ohio Valley Conference was never a simple exercise.

Before the season commenced, the Panthers brought in a fresh crop of talent, with four freshmen, not to mention redshirt Kylie Michael, joining the Eastern volleyball fold.

Eastern cobbled together 10 wins through the course of 31 games, a rate of achievement that paled in comparison to the 15 games they put together a year ago.

But one attribute was, and remained, a constant for the Panthers all season long, even in matches that ended in resounding defeat.

The Panthers took solace in their efforts on this end, so much so that, at least defensively, they were on equal footing with some of the best Ohio Valley Conference teams.

Case in point, Eastern attained top five finishes in both digs and blocks, as did Austin Peay, the winningest team in the entire conference.

Junior Maggie Runge was one of just two OVC players to average at least one block per set, while redshirt freshman Anne Hughes happened to excel in an entirely different field of expertise.

Whenever Eastern craved for a defensive stop, it was Hughes who swooped in to provide a necessary dig.

Opponents were, on a nightly basis, coerced into an onerous guessing game, one where they would, ready or not, be subjected to an offense that frequently spiced things up.

On some sequences, Eastern rattled the other team on a force-induced kill, but in others, the Panthers would catch the defense off guard with a soft tap over the net.

Difficult though it might have been to prevent, opposing players had to regroup after each defensive let down, trying, as best they could, to curtail the latest wrinkle to the Panther offense.

Offensive inconsistency, however, became an underlying theme behind many of Eastern’s shortcomings.

In over half of the Panthers’ losses this season, the opposing team came away with a sweep.

Conversely, Eastern swept teams in seven of its 10 victories.

But regardless, head coach Julie Allen was struck by her team’s stoicism and relentless efforts, whether they won or lost.

Allen has announced the additions of six players to the Eastern volleyball team, which, if all goes to plan, could turn a bottom of the conference team into a playoff contender.