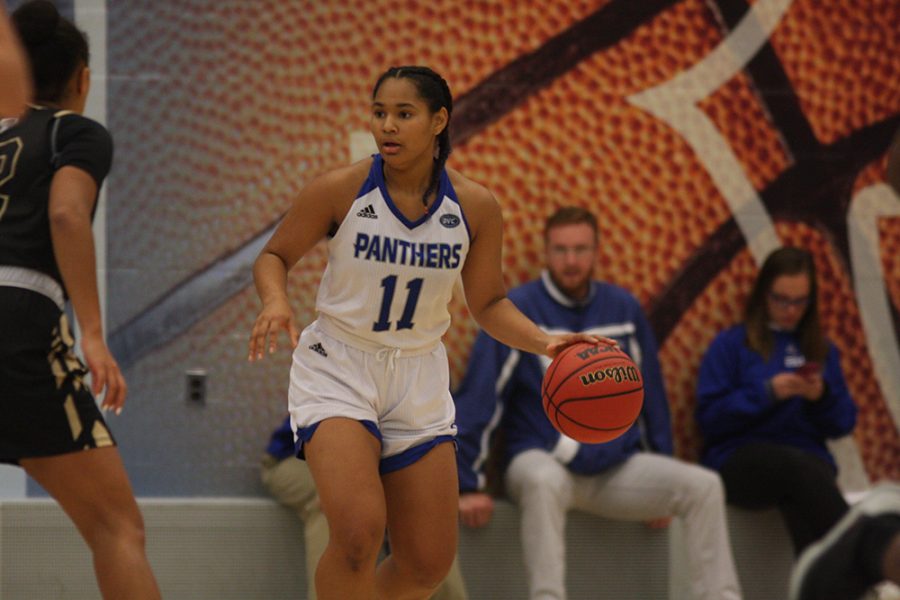 Eastern sophomore guard Karle Pace takes the ball up court in the Panthers’ 72-63 win over Fort Wayne at Lantz Arena on Thursday. Pace scored a game-high 28 points and made six three-pointers in the win.

So much was said this preseason about the development of the young Eastern women’s basketball team and what it could mean moving forward as the program continues to rebuild. Particularly, strides by sophomore guards Karle Pace and Taylor Steele were seen as being very important to the team’s improvement. On Thursday in Lantz Arena, it appeared as though the strides have been taken.

Pace scored a game-high 28 points and Steele added 20 as the Panthers beat Fort Wayne 72-63. Not only did the win come against a Fort Wayne team that crushed Eastern 93-77 last season, but the victory gives the Panthers their third win of the season, tying their total from all of last year in just four games.

Pace and Steele started scoring early and never let up. The pair seemed to feed of each other all game long, when one made a basket, the other made sure to do so the following possession. By the end of the first half, Steele had 16 points and Pace had 13, while the Panthers held a 21-point lead.

“Really I was just taking what they gave me,” Pace said. “They chose to back off of me and the games before I didn’t make any threes, so I mean, they were playing off and I had to tell them ‘they’ve got to respect my shot.’”

Pace was 6-of-10 shooting the ball from three-point range in the game, and her comment was spot on, it really did not seem like Fort Wayne wanted to play her too close and Pace took advantage.

Steele came into the game leading the team with 13 points per game and once again turned in a fine showing at home. She made multiple runners to the basket and also scored twice from outside. In the Panthers’ three wins this season, Steele has scored 12, 16 and now 20 points.

“Definitely just reading the defense, because last year I really just only shot threes, but now with people coming out at me I can definitely get my drive in there too,” Steele said.

Steele and Pace’s continued growth is going to be the main ruler to see just how far this team can go in the second season under Bollant. An injury to guard Grace Lennox, who had six assists and six rebounds on Thursday, forced Pace and Steele into a lot of playing time as freshman. That playing time last year is something Bollant credits to the duos high-caliber play early this season.

“I really think it helped them mature,” Bollant said. “You grow up faster on the court, it’s easier to learn through mistakes as you play. I think it helped their confidence, they averaged 12 a game both of them in conference play last year and one of the great things about freshman is they become sophomores. Usually you’re physically stronger, the game slows down for you and it just looks like the game is just slower to them, they just look in control. They know what decision to make and at times they make it look easy.”

The 93 points the Panthers gave up to Fort Wayne last season was a season-high and was likely Eastern’s ugliest defensive game of the year. But, to further push the narrative of this team’s development, Eastern unleashed its buzz defense on Fort Wayne in this game, and forced the Mastodons into 26 turnovers, holding a team that a year ago dropped 93 points on them to just 63.

“We’re just so much better defensively,” Bollant said. “Last year when a team started the game against us and scored 11 points, we never slowed them down, we just didn’t have that ability. Where this year now all of the sudden with the buzz and the 2-2-1, we can slow somebody down, we can do something different. We just have a lot more bodies that can make plays which is great.”