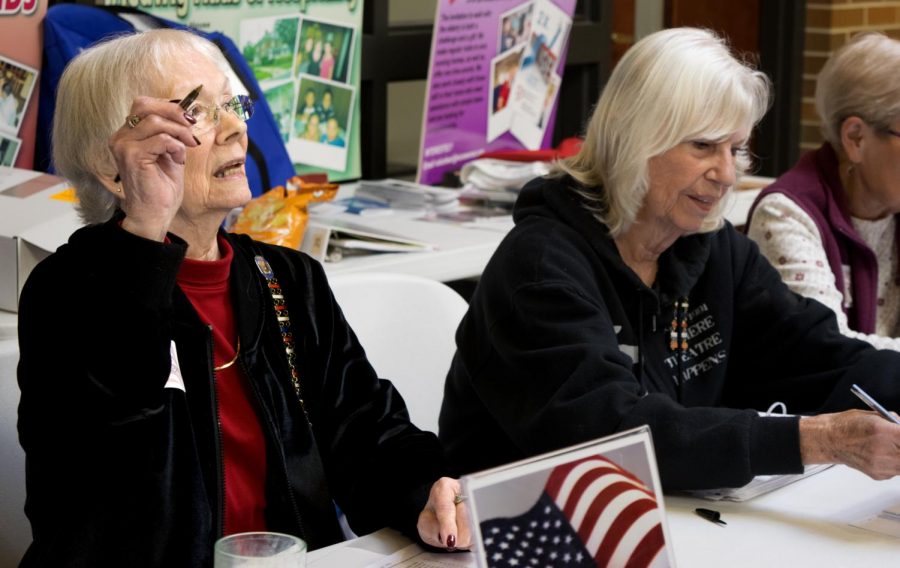 As people hit the polls on Tuesday, Linda Kirby sat at the 19th precinct table in the Newman Catholic Center with other election judges and reminisced on how her life had intertwined with voting.

The year was 1971; young men were dying in the Vietnam War and Led Zeppelin’s ‘Stairway to Heaven’ hit radios for the first time.

It also marked the year the 23rd Amendment, the one that gave 18 year olds the right to vote, was passed through Congress.

She was an Eastern sophomore, and it was the first election in American history that 18-year-olds could vote in.

“(It was the election of) 1972. Sorry, I did vote for Nixon,” Kirby said. “It was real important in my family; my family was military.”

Once a first-time voter, Kirby is now an election judge to help current new voters.

Jeri Hughes, a Charleston resident who also served as an election judge, said this community involvement is an essential part of the democratic process.

Kirby said the election she experienced as a first-time voter back in 1972 was a charged one, as a lot of different things were happening at that time.

“It was a big issue because … when I graduated from high school it was ’71, and you got the Vietnam War, and you got a lot of young people dodging the draft … My father was killed in Vietnam in 1966,” Kirby said. “He went over there with President (Lyndon B.) Johnson’s first escalation of the war, and then President (Richard) Nixon, especially in 1972, was promising to end the war, which he did. If you had family in Vietnam, you had a political (motivation).”

She said it was still a difficult choice because many young students were facing many different challenges.

“There was a lot of arguments and then it was a difficult time because you had college students that had issues with the draft and Canada and … some of the people in college had been to Vietnam and had come back and were college students for the first time, so it was a challenging time,” Kirby said. “There isn’t a good side to this.”

She saw many young men in her town of Columbus, Georgia go to Vietnam and die because of a forced draft, which was why voting at 18 was important to her and her classmates, she said.

“To me, it was like our own privilege to vote at 18 because I knew young men who had gone over there and not come back, and if they had been in the country at that time, they would not have had the right to vote,” Kirby said. “That was a big issue for my age group at that time.”

Makenna Boyd, a freshman English education major who voted for the first time Tuesday, said she understands how important it is today to start voting young.

With voting still tending to be lower in the past among younger age groups, Kirby said she does not know if these generations understand that voting is a privilege.

“It surprises me because of how many young men have been involved in the middle east war, but there hasn’t been a draft, it’s been voluntary, so I sort of wonder if people have gotten too comfortable,” she said. “If you’re not really attached to the military, you don’t (always) realize how many people have sacrificed for the freedoms we enjoy, but part of the freedom we enjoy is being able to say what we want to say in this country; you can’t complain about something if you don’t vote.”

Linda Bagger, a Charleston resident who was another election judge on Tuesday, said voters, younger and older, need to make sure they are knowledgeable about candidates and their platforms.

Kirby said voting is always something she has stressed, and it should continue to be a critical event to everyone.

“Voting’s just always been really important to me,” Kirby said. “You can’t complain about something if you’re not a part of the process, and even if things didn’t go your way, you still had a voice, and if you felt strongly about it, you maybe had to work harder to get some of your peers or the people that you knew to get out and voice their opinion.”