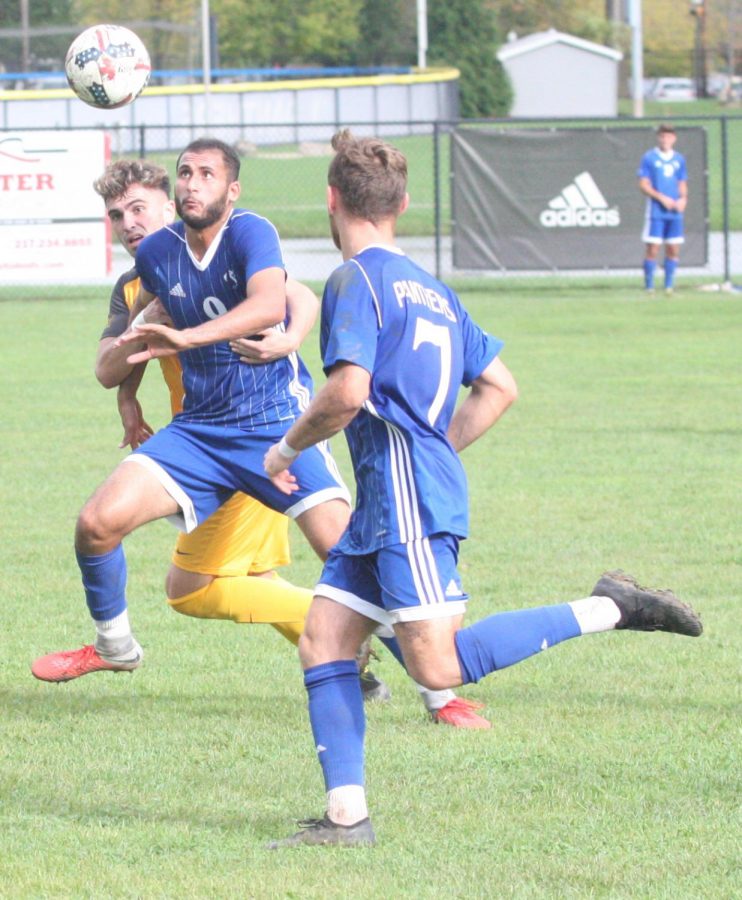 Eastern sophomore forward Shady Omar prepares to play the ball on Oct. 10 against Valparaiso. The Panthers lost the match 2-1 at Lakeside Field.

The game-deciding goal came in the 37th minute from freshman Martin Veys on a corner kick from sophomore Diego Gutierrez.

Omaha took five corner kicks on the day compared to zero from Eastern.

Veys’ goal was his fifth on the year and 11th point, the second-most for the Mavericks, and he has a team-leading .217 shot percentage.

Gutierrez claims the most points for Omaha at 20 on the year in 1101 minutes played.

Eastern was forced back for much of the game, registering just two shots and zero on goal compared to 19 shots and four on goal for the Mavericks.

The Panthers broke their streak in which they managed a goal in each of their last five matches coming into the day.

Eastern sophomore goalkeeper Jonathan Burke managed three saves on the day on his heels, finishing the regular season as the fourth-ranked keeper in the conference in goals-against average at 1.21.

Burke also ranks fourth in the conference in save percentage at .750.

In the other net, junior Ugo Tritz made zero saves, but it was due to the help of his defense, and his goals-against average moved down to just 1.01 per game.

Tritz’s .784 save percentage slots him third in the Summit League just ahead of Burke.

The silver lining for Eastern is the loss does not eliminate the Panthers from postseason play.

After a 5-0 win from Denver against Oral Roberts this weekend, Eastern slipped into the fourth seed of the conference championship later this week.

Eastern will face Denver in the first round, and despite the Pioneers’ 13-3-2 record in the regular season, the Panthers forced Denver’s only conference result that was not a win.

On the other side of the bracket, Omaha faces Fort Wayne, and the winners of the two matchups will take each other on in the conference championship.

A 0-0 draw in late September gave Eastern life in the Summit League standings, outlasting Western Illinois and Oral Roberts despite finishing with the worst overall record in the conference.

Eastern faces 1-seeded Denver at 1 p.m. Thursday in the first round of the conference tournament.