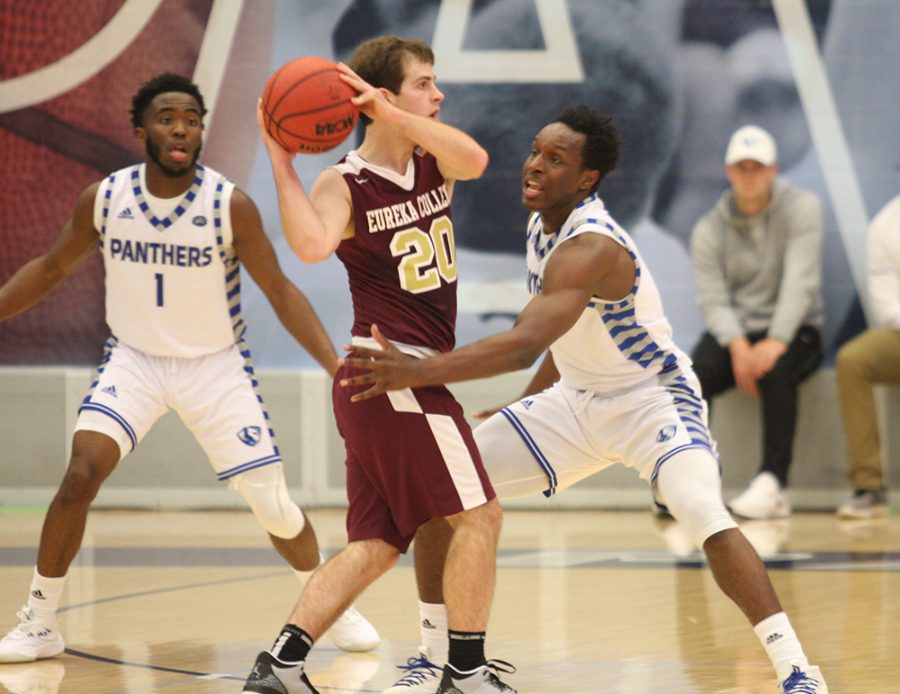 Eastern sophomore guard Mack Smith plays defense on a Eureka College ball handler in the Panthers’ 74-44 win on Friday night in exhibition play. Smith had 11 on 4-of-9 shooting in the game at Lantz Arena.

The beginning was not pretty, but the results show what the men’s basketball team was able to do against Eureka College on Friday.

The 79-44 final score was indicative of what the Panthers accomplished after the first few minutes of play.

Eureka set the tone 30 seconds into the contest, when Hank Thomas threw an alley oop to Dakota Bennington on the Red Devils’ first possession to start the scoring for the night.

The Panthers somewhat struggled through approximately the first six minutes of the game, falling behind 12-8, something head coach Jay Spoonhour attributed to nerves.

“I think we had four new guys (out there as starters), for all those guys they were all just a little jittery probably,” Spoonhour said.

Eastern had three turnovers in the first four minutes and 15 seconds of play, two of which were passes that missed their targets and flew out of bounds. The other was stolen by Bennington, who led Eureka with 17 points.

But Eastern kicked everything into high gear from the time between 14 minutes left in the first half to 6:45 left in the half, going on a 21-3 run. Spoonhour said that during the run, everyone settled down and let the game come to them.

All aspects of Eastern’s game, from shot selection and converting offensively to being more aggressive defensively, improved during the run.

Offensively, returning guard Mack Smith and Josiah Wallace, a transfer from Olney Central College, led the way during the run.

With 13:56 left on the clock, Cam Burrell made a pass to the cutting Wallace, who converted a layup on an almost 360-degree contortion shot.

Wallace’s one assist went to Smith, who hit a three pointer from the wing Wallace’s pass at the 10:22 mark, making Eastern’s lead 24-12.

Smith also had two corner threes later in the run, leading Eastern with nine points during that span and with 11 points at halftime. Smith did not play much in the second half, but Wallace did and finished as the Panthers’ leading scorer with 23.

Smith was Eastern’s second-leading scorer with 11 points, and Rade Kukobat was the only other Panther in double digits, with 10 points.

“I want him to do better on ball screens, he did good on them,” Spoonhour said. “He only had two assists because I think he needed to get in the paint more and dish the ball more, but he shot it well and he can do that.”

“We didn’t finish around the goal,” Spoonhour said. “You can’t shoot 50 percent if you don’t make layups. We went up weak, we had a couple that were just layups, breakaway layups, and we just missed them.”

On the defensive side, Spoonhour said the best thing the Panthers did was not foul. Against the University of Missouri-St. Louis in a scrimmage last week, Spoonhour said Eastern did not defend well up front, and that the team let players get by a lot and reached in and committed a lot of fouls.

“We did fine, we took a few chances late, the best thing we did is we didn’t foul,” he said. “This time, we showed our hands a bit better and stayed out of trouble.”

Eastern did have a good size advantage over Eureka and outrebounded the Red Devils 61-36. Burrell and Kashawn Charles each had eight rebounds, and JaQualis Matlock led Eastern with 11 total rebounds, seven of which were offensive.

“Defensively, it was just so spotty,” Spoonhour said. “They run stuff that’s hard to guard, and I thought we did a pretty good job of pressuring them. The length around the goal was hard for them to score over, but we’re not going to be that much longer than most folks we play.”

The Panthers open the season at the University of Texas on Tuesday at 7 p.m.