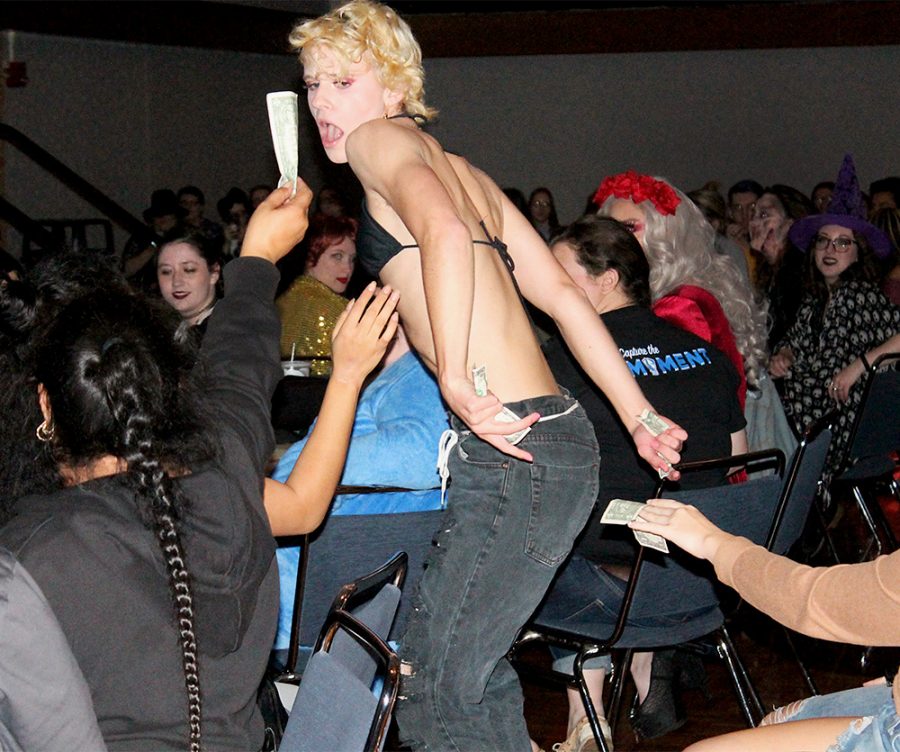 Cherry Bottom, a performer in the EIU Pride Student Drag Show, takes tips from audience members Tuesday night in the Grand Ballroom at the Martin Luther King Jr. University Union. Performers were tipped by the audience throughout their performances.

Mother Natwhore, a performer in the show, has performed in three drags shows at Eastern in the past. He said the show is beneficial for many reasons, including giving people a voice.

“I think it brings visibility to a community who is not always heard from or seen,” Mother Natwhore said. “It exposes people to new beliefs so that we can spread love and acceptance.”

He said the hardest part of performing for him is right before he goes onstage.

“As I’m getting introduced is the most nerve-racking thing,” he said. “Once I’m out there I’m fine.”

Jacob Powers, a senior psychology major, said he thought having drag shows on campus is important.

Powers came to the event dressed in drag but did not perform. He has performed in the past and said he was impressed with all of the performances.

“Getting up the courage to actually get on stage is the hardest part,” Powers said.

He is considering signing up to perform next semester.

Fantasia Blackheart, a performer, said her favorite part of performing is the audience.

“Through those doors people are just coming to see us and the gods and goddesses that we are,” Fantasia Blackheart said. “They also get swept up in our own fantasy that is us and our characters.”

She said one of the best parts of attending drag shows is shutting off from the rest of the world.

“(The audience) can just kind of forget the shitty world that is out there and come (to a show to) celebrate queer people and non-queer people as performers,” said Fantasia Blackheart.

She said her favorite part of the crowd is the energy they give off.

“(Their energy) feeds the performance,” said Fantasia Blackheart. “As people were cheering me on I got more and more intense. That’s basically what I live for.”

Fantasia Blackheart said for her the hardest part of performing is wearing heels.

“Heels hurt,” she said. “Being a woman is hard, but it’s a necessary evil to look this good.”

Fantasia Blackheart’s sister, Autumn Bustillos of Charleston, helped her get ready for the event.

Bustillos said her favorite part of the evening was seeing Fantasia Blackheart perform.

“Seeing (her) fall down and get back up and live and act like, ‘You know what, I fell down, but I’m still here, I’m still and stage presence, and I’m still going to turn it out,’ (was my proudest moment),” said Bustillos.

“It does good for (Fantasia Blackheart’s) performance self esteem,” said Bustillos. “(She) came out at a really early age, and they’ve always just been like, ‘You do you, you be you, and just go for it and be yourself.’”

Over 100 people were in attendance for the event, and many of them came dressed in costumes and drag.