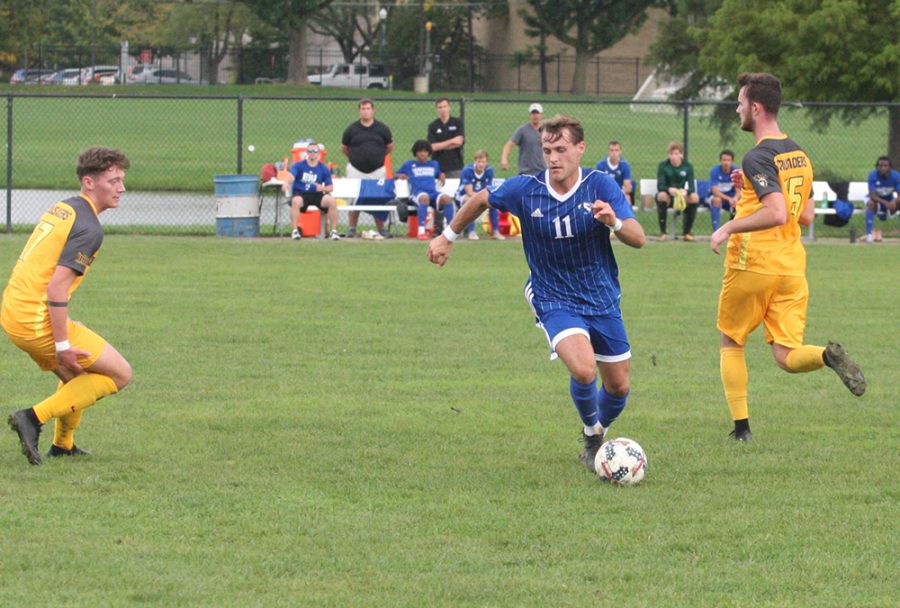 Toby Andrews dribbles the ball between a pair of Valparaiso defenders during the men’s soccer team’s 2-1 loss at Lakeside Field on Oct. 10.

The Summit League men’s soccer regular season ends with a slate of matches this upcoming weekend, and the standings have plenty of room to change prior to the conference tournament.

The cream of the conference crop, Denver (12-3-2, 3-0-1 SL) stands alone in first place, but despite a strong season overall, the Pioneers may be in a position to have the number one seed stolen.

Denver has yet to lose a conference matchup, but a 0-0 draw to Eastern back in September leaves the team needing a win to secure the top spot come playoff time with Omaha (5-7-1, 3-1 SL) nipping at the Pioneers’ heels.

The Pioneers’ sophomore goalkeeper Will Palmquist was awarded the Summit League Defensive Player of the Week award yesterday after allowing only one goal on 23 shots against Stanford.

Palmquist has claimed the honor twice this season as Denver now ranks 28th in the nation according to NCAA men’s soccer RPI.

Denver takes on Oral Roberts this Saturday to try and take the top spot for the Summit League tournament.

A tie or loss for Denver would open the door for Omaha to steal the spotlight if they can secure a win in its final game this season against Eastern this Saturday at 2 p.m.

Omaha lost a non-conference bout with California State-Fullerton 2-0 last Tuesday before rebounding with a double overtime win against Oral Roberts on Saturday by the tune of 2-1.

Despite a sub-.500 overall record, the Mavericks are nothing to sneeze at, as the team’s junior goalkeeper Ugo Tritz ranks second in the conference with a .784 save percentage on the year.

Meanwhile, Oral Roberts (6-6-3, 0-2-2 SL) needs a win of its own to try and slide in the backdoor of the tournament ahead of Eastern.

Unfortunately for the Golden Eagles, even a win would only give them a tie for the final spot, and according to Summit League tournament tiebreaker rules, Oral Roberts would need at least a 4-0 shutout for a chance at the playoffs due to goal differential.

A win for the Panthers and a Fort Wayne tie or loss to Western Illinois on Saturday would give them the points needed to rise the ranks and likely face Omaha again in the first round of tournament play.

Western Illinois is all but officially eliminated from postseason eligibility.

Fort Wayne (10-6-1, 2-2 SL) would bolt down the third seed with a win, but the Mastodons cannot make up the ground needed to catch Omaha even with a hefty victory on Saturday.

After the set of matches this weekend, the Summit League championship tournament begins Nov. 8 to 10 in Denver.

Oscar Rzodkiewicz can be reached at 582-2812 or [email protected]