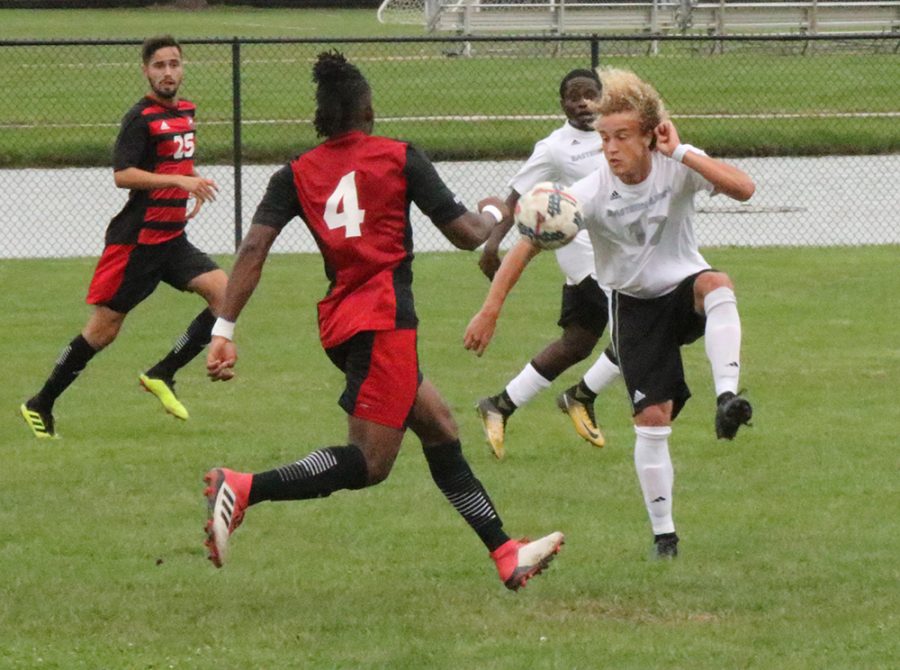 Cameron Behm gets ready to settle the ball with teammate Kris Luke running behind him and a Northern Illinois defender running toward him during a 2-0 loss on Sept. 21 at Lakeside Field.

The men’s soccer postseason is right around the corner, and Eastern suffered a tough conference overtime loss to Fort Wayne on Senior Day by a score of 2-1.

Both teams scored early first half goals that kept that game tied up for nearly 90 minutes of game clock before Fort Wayne freshman Ryan Bernt knocked in the golden goal to secure the win in Eastern’s final home game of the year.

Eastern head coach Kiki Lara said the team needs to keep grinding like they have all season after the close bout.

Eastern fell behind in the 7th minute when Fort Wayne senior Blake Cearns netted a ball past sophomore goalkeeper Jonathan Burke, but the Panthers stormed back down the field under three minutes later to tie the game up.

Junior Alex Castaneda knotted the game up for Eastern as he posted his first goal in just four games played this season.

The Panthers have maintained a defensive mindset all season, allowing just 0.75 goals per conference match, but Lara said he liked the production he saw from his offense.

The 97th minute game-winner from Bernt took the game, but it looked like the Mastodons had won the contest minutes before when a Fort Wayne goal was called back after officials deemed the play offsides.

On the other side of the field, freshman Fort Wayne goalkeeper Tor Erik Larsen managed six saves with only one goal allowed through nearly 98 minutes for the Mastodons.

Larsen leads the Summit League with 87 saves this season.

Goalkeeping-wise for the Panthers, Burke allowed two goals alongside just three saves on the day, despite being the fourth-ranked Summit League keeper in save percentage this year with a 0.75 clip.

Eastern’s final regular season game against Omaha will be pivotal for the team’s postseason hopes.

Lara said the team will prepare for the matchup like it would any other.

“Every game’s big for us, so it’s just a matter of staying consistent, staying level-headed and not putting pressure on the guys or the staff to do anything different,” Lara said.

The game kicks off at 2 p.m. on Saturday.