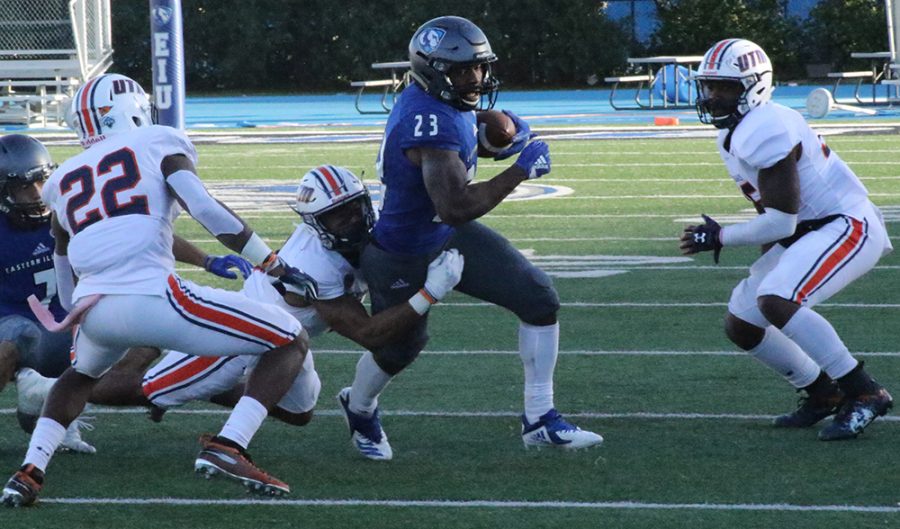 Eastern running back Isiah Johnson breaks through tackles in the Panthers 24-21 win over Tennessee-Martin on Oct. 24. Johnson led the Panthers with 131 yards rushing in the Panthers 31-23 loss to Eastern Kentucky on Saturday.

Eastern Kentucky scored two unanswered touchdowns in the fourth quarter of its 31-23 win over Eastern on Saturday, ending any chance of Eastern putting together a winning season in conference play.

Coming off last week’s win over Tennessee-Martin, Eastern was sitting with a 2-3 conference record with three games left to play. A sweep of the Panthers’ remaining schedule would have meant a 5-3 OVC finish, a pleasant ending to what had been a rough season.

Instead, Eastern took Eastern Kentucky into the fourth quarter with the score tied at 17 and a chance to string together back-to-back conference wins and continue to redeem what had felt like a lost season.

Eastern Kentucky wide receiver Jaelin Carter was responsible for both of the Colonels’ scores in the fourth quarter, single-handedly leaving his mark on the rest of Eastern’s season.

Less than two minutes into the final quarter Carter scored on an 18-yard pass from quarterback Alphonso Howard, putting Eastern Kentucky up 24-17 with 13:54 to play in the game.

Howard threw only four passes in the game, but made them count, going 4-of-4 passing with one touchdown and 67 yards. Howard replaced quarterback Austin Scott who was an abysmal 7-of-20 passing for 104 yards.

Eastern quarterback Harry Woodbery threw an interception in the third quarter that set up Carter’s first score. The interception halted what had been an eight-play, 50-yard drive for Eastern.

Woodbery finished the game with 181 yards and one interception. Both he and Johnathan Brantley threw interceptions in a game for the first time all season. For Brantley, his interception, which opened the game for Eastern, was his first of the season.

Eastern Kentucky marched nine plays for 92 yards to capitalize on the turnover.

Eastern punted on its next possession and pinned Eastern Kentucky at the 10-yard line, but the Colonels marched again, this time for nine plays and 90 yards for their second touchdown of the fourth quarter.

This time, Carter ran the ball in five yards to give his team a 31-17 lead.

Eastern scored again with 3:53 remaining in the game via a nine-yard run by Brantley.

Kicker Nick Bruno missed the extra point, meaning Eastern had to get the ball back, score a touchdown and convert a two-point play to tie the game.

Eastern got that chance with 32 seconds left in the game after the defense forced the Colonels to punt. Eastern, however, was unable to score late and fell to 2-7 on the season.

Eastern knew Eastern Kentucky was going to come into the game and run the ball at will, knowing that the Colonels’ pass game was weak. The Colonels did run the ball well, finishing with 237 total rushing yards, 151 of those coming from L.J. Scott.

The Panthers, however, rose to Eastern Kentucky’s challenge to run the ball, and Eastern put up 238 rushing yards of their own, with Isaiah Johnson matching Scott’s performance with 131 yards on the ground.

Eastern linebacker Dytarious Johnson put together another game where he was all over the field: He finished with 10 tackles in the game.

Next week, Eastern will host Austin Peay at O’Brien Field and try to salvage what is left of conference play and maybe finish the season with an even 4-4 conference record.