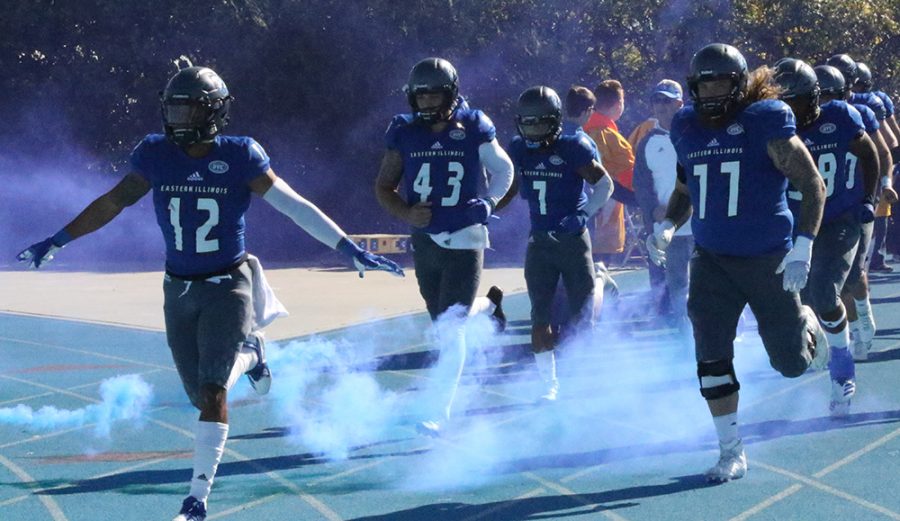 Eastern defensive back DySaun Smith (12) leads his team out of the tunnel prior to Eastern’s 24-21 overtime win over Tennessee-Martin on Saturday. Eastern now stands at 2-2 in conference play.

The king in the Ohio Valley Conference is dead.

Okay, maybe Jacksonville State’s football program is not dead, but at the very least, the program that had won 36 straight conference games is humbled after losing to Southeast Missouri 37-14 on Saturday.

Rumblings of the potential upset started swirling at halftime when Southeast Missouri took a 16-7 lead into the locker room, but at this point, Jacksonville State and its number one ranked offense and defense were far from being out of the game. To this point in the game, the Redhawks had scored on a 14-yard pass from Daniel Santacaterina to Zack Smith and a field goal block that was returned 85-yards for a touchdown.

The upset rumblings quickly turned into alarms in the third quarter.

Forty-seven seconds into the third quarter Santacaterina connected with Kristian Wilkerson for a 13-yard score that put Southeast Missouri up 23-7.

Southeast Missouri all but sealed its upset bid at the end of the third quarter after the Redhawks forced Jacksonville State quarterback Zerrick Cooper to throw his third interception of the game. Southeast Missouri marched down the field and turned that turnover into touchdown drive that ended with a 10-yard touchdown run by Mark Robinson.

Jacksonville State scored with eight minutes remaining in the game; receiver Josh Pearson grabbed his 12th touchdown reception of the season. Pearson is now one touchdown behind Eastern receiver Alexander Hollins for the FCS lead.

Southeast Missouri’s all-conference running back Marquis Terry sealed the upset in big-time fashion with 1:58 to play in the fourth quarter when he ran the ball 39-yards to put the Redhawks up 37-14.

The Redhawks win over Jacksonville State is quite possibly the without a doubt the biggest conference win for any OVC team this season for sure, and quite possibly multiple seasons into the past.

Southeast Missouri dominated the once juggernaut-like Jacksonville State team on both sides of the ball, forcing the Gamecocks into five turnover and holding them to a season-low in points.

The last time Jacksonville State lost a conference game was to Eastern in November of 2013, when the seniors now playing on both teams would have been juniors in high school.

The noise around the Jacksonville State upset was so loud that it deafened the impact of Murray State’s big 34-6 win over Eastern Kentucky on Saturday.

Murray State’s legitimacy in the conference has been doubted by many this season, including this writer, but with its win over Eastern Kentucky, all the doubters have been silenced.

The Racers now own the conference’s best record at 4-0 and hold wins over Eastern Kentucky, Eastern, Tennessee-Martin and Tennessee State.

Murray State had touchdowns come from all over the roster in the win; all four of the team’s touchdowns were scored by different players. Quarterback Drew Anderson threw two touchdowns in the game and added 205 yards.

The Racers all-conference pass rusher Kenny Wooten had three sacks and seven total tackles in a dominating performance up front.

The team’s two quarterbacks could not have played more differently in the game. Tennessee State quarterback Michael Hughes had 318 yards passing with three touchdowns, completing 22 of 27 pass attempts. On the other end of the spectrum, Tennessee Tech’s freshman quarterback Bailey Fisher was just 16-of-30 passing with 188 yards and one interception.

Next week will be a huge week for Murray State in continuing its push toward silencing all of it nay-sayers when the Racers will host the recently-toppled Jacksonville State Gamecocks on Saturday.

Eastern, fresh off a win against Tennessee-Martin, will travel to Eastern Kentucky to face a Colonels team looking for redemption after its loss to Murray State.

Southeast Missouri will try and handle a Tennessee-Martin team starving for a win on the road.

Tennessee Tech will do its due diligence to pick up its first win of the season Saturday against Austin Peay.