People show support for Eastern, wait for candy during parade 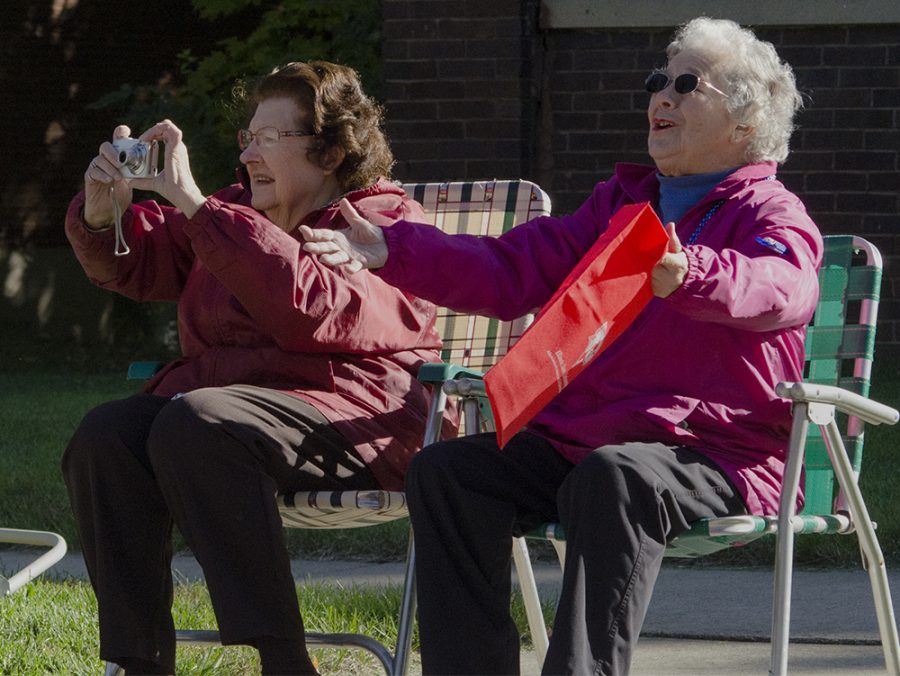 Charleston resident Jeanette Baer (left) takes a picture of her daughter Lynette Drake, the interim vice president of student affairs, while her best friend Joan Gregg (right) stretches out her arms to ask for candy during the 2018 Homecoming Parade on Saturday. The two friends were sitting in front of Baer’s house and said the best part of the parade was seeing everyone they knew and, of course, the candy.

People gathered by the dozens in front of houses on 6th and 7th Streets, holding plates of food, cans of beer or soda and listening to music while they waited for the 2018 Homecoming Parade to roll by.

Children of all ages lined the curbs, pumpkin shaped Halloween buckets waiting to be filled with candy held tightly in their hands as they shifted and stretched their necks looking to see the fire truck that led the parade.

But the kids were not the only ones waiting for candy.

Emmerson Hjort, 16, of Monticello said she comes back to see the parade because Eastern is her mom’s alma mater.

“The best part is getting the candy,” she said. “I love the music too.”

Hjort is a Global Messenger for Special Olympics Illinois, a cheerleader, a Law Enforcement Torch Run Athlete Spokesman and a University of Illinois in Urbana-Champaign Polar Plunge Ambassador.

Aside from the candy, she also said the best part of watching parades is just being with her mom.

Charleston residents and longtime friends Joan Gregg and Jeanette Baer sat in front of Baer’s house and waited to grab candy as the parade rolled by.

They said they have been attending for almost 17 years, though Baer said it had only been 15 years for her.

They said their favorite part about the parade was seeing people they knew.

Gregg said they first met at Illinois State and graduated at the same time and taught for two years across the hallway from each other at an elementary school in Bloomington, Illinois.

“Then, 17 years ago our husbands died a month apart so we got back together and it’s been like we’ve been friends forever,” Gregg said.

The two reconnected when Baer moved back to Charleston after her husband died to be closer to her daughter and grandchildren. Her daughter is Lynette Drake, the interim vice president of student affairs.

“I thought (Charleston) was a good place to come because I had grandchildren that were little,” Baer said.

Both said the parade brings everyone and old friends together.

While she was talking, Gregg would pick up the candy that parade participants tossed their way. If there were two pieces of candy, she would give one piece to Baer and put the second piece in her red Illinois State bag.

“I was at the Illinois State homecoming last weekend,” Gregg said, laughing and holding up her red bag. “And that’s why I have the red bag,”

If there was only one piece of candy that was thrown their way, she would give that piece to Baer.

The duo pointed at different people in the parade and asked each other if they knew someone on a float or in the Charleston High School marching band.

“Yes, they’re gone now so it’s up to Lynette (Drake) to be in the parade now.”

Corryn Brock contributed to the article.