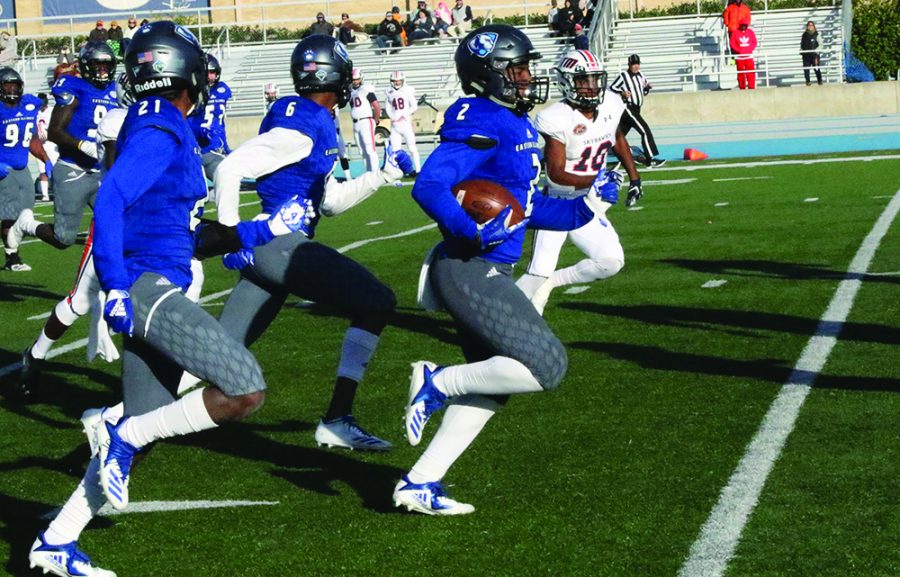 Eastern freshman defensive back Bryce Dewberry (2) returns an interception for a touchdown in the the third quarter of Eastern 24-21 overtime win over Tennessee-Martin on Saturday. The win moved Eastern’s record to 2-6 (2-3 OVC) this season, Tennessee-Martin fell to 1-6.

The wind on Saturday was relentless. Throughout the Eastern football team’s homecoming game against Tennessee-Martin, huge gusts of wind tortured footballs in the air, carried debris across the field and made the goalposts dance like leaves. But still, Eastern kicker Nick Bruno was able to get his team an overtime win.

Bruno stepped up in overtime with the wind and his team, which desperately hungered for its second win of the season, at his back and nailed a 38-yard field goal, delivering the Panthers a win for its homecoming game.

The kick moved Eastern to 2-6 on the season (2-3 in OVC play), but most importantly, ended the Panthers frustrating streak of losing games that have come down to the wire. When the referees signaled the kick good, Bruno took off jumping in celebration towards the middle of the field, and the Panther sideline sprinted out to join him.

“Man, I mean it’s a different feeling,” Bruno said. “It’s like hitting a walk off home run to win a game, it’s a feeling that you don’t get to experience that much but when you do it is real sweet.”

Despite the wind and the goalposts moving all over the place, Bruno’s confidence in his ability to make the kick never waned.

“I knew I had to resurrect myself from a few seasons ago, I didn’t think about that at all,” Bruno said. “But definitely felt very good. Luckily, we had that little bit of wind with us too, I knew as soon as it came off my foot, I did know I made that.”

The excitement of any win that comes on a field goal in overtime is always very prevalent in the players and coaches after games. But, given the struggles the Eastern football team has been through this season, getting this win over Tennessee-Martin, in that fashion, meant so much more.

“Oh, it’s fantastic,” Eastern head coach Kim Dameron said. “That’s what you play for, that’s why you do this. You do it for the kids, you do it to help them get an education and you hope that they have a great experience here and that they grow up and they’re better when they leave then when they got here and all that, but when you get right down to it, you do it to win the game. If we didn’t do that, we wouldn’t play games and we wouldn’t keep score.”

The game was filled with the type of moments Eastern needed to not just get a win but boost team morale and confidence for the upcoming week.  Every touchdown Eastern scored seemed to come with a little bit of extra mojo behind it.

Eastern’s first score of the game, which tied the score at 7-7, came in the second quarter on a 34-yard touchdown pass from Harry Woodbery to receiver Alexander Hollins. Not only did the pass tie the game, but it also extended Hollins’ FCS leading touchdown total to 13.

The Panthers found themselves trailing once again in the third quarter, after Tennessee-Martin’s all-conference running back LaDarious Galloway ran in his second touchdown of the day eight seconds before the close of the first half.

Johnathan Brantley tied the game again for Eastern in the third quarter, running the ball 16-yards up the middle of the pocket, dodging multiple defenders and breaking one tackle in the process, eventually finding the endzone tying the game at 14-14. Exciting score number two for Eastern.

It would be true-freshman Bryce Dewberry however, with his older brother and Eastern football alumni Bradley watching in the stands, that gave Eastern its most electrifying score of regulation. With time expired in the third quarter, Dewberry intercepted a pass from Tennessee-Martin’s backup quarterback Joe Hudson and returned it 61-yards to give the Panthers’ their first lead of the game at 21-14.

Dewberry noticed on the play that all four Tennessee-Martin receivers were lined up on the left side of the field, opposite of him. Recognizing that he had no one to cover, Dewberry moved himself to the center of the field, putting himself in perfect position to make a play.

“It was a fake screen and I just slid over to the middle of the field and the ball came to me,” Dewberry said. “I just caught it and did the rest.”

Hudson came into the game for Tennessee-Martin early in the first quarter to replace star quarterback Dresser Winn who left with an apparent shoulder injury. When Winn exited the game, he was seven-of-seven passing for 48-yards. Hudson finished 18-of-30 for 175-yards with one touchdown and one interception.

The Eastern defense, which has struggled mightily this season, played much better against Tennessee-Martin all things considered. Eastern gave up 405 yards to the Skyhawks, but Tennessee-Martin did run 91 total plays.

The Panthers tackled much better and forced two turnovers in the game. Linebacker Dytarious Johnson made his presence known all over the field, he finished with 13 tackles, 5.5 of them resulting in a loss of yards for the Skyhawks.

The one big guffaw for Eastern’s defense came on Tennessee-Martin’s game-tying fourth quarter touchdown with 25 seconds to play. Hudson found receiver Jaylon Moore for a 26-yard touchdown on a play where it seemed someone in Eastern’s secondary lapsed in coverage.