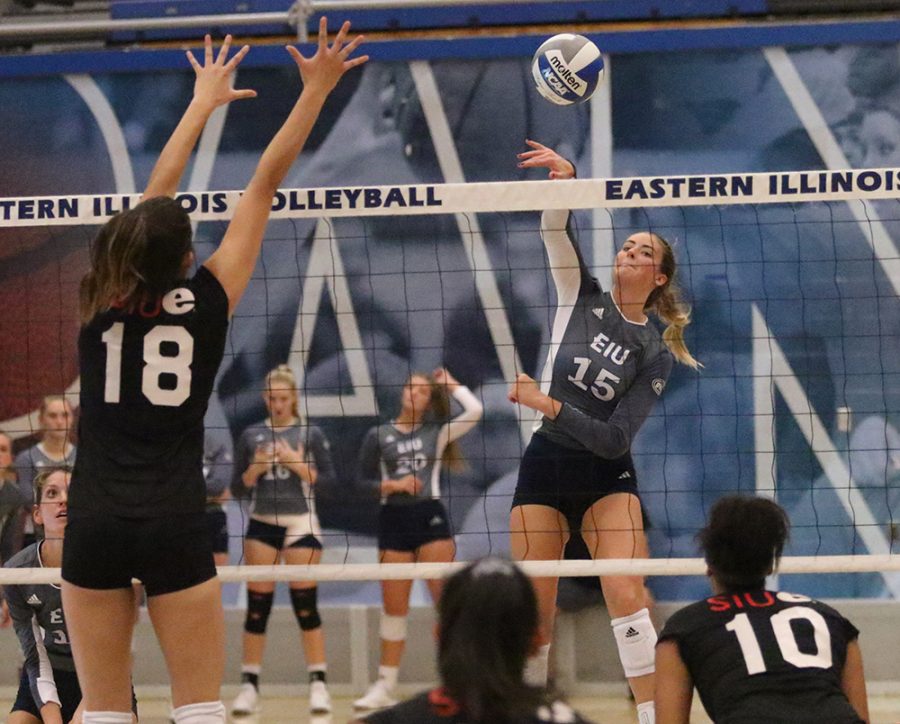 Eastern outside hitter Laurel Bailey spikes a ball into Southern Illinois Edwardsville’s court during the Panthers’ 3-0 shutout victory on Sept. 19.

The Eastern women’s volleyball team submitted its midterm report card last weekend, as the Panthers played their eighth conference match out of a total of 16, compiling a 2-6 record.

The team’s placement in the Ohio Valley Conference Standings?

That noted, the Panthers will look to regather their composure in the OVC, with Eastern Kentucky and Morehead State visiting for Homecoming Weekend.

The Panthers, head coach Julie Allen said, have sharpened their study habits in preparation for Eastern Kentucky and Morehead State, as the areas of emphasis in practice have been manifold.

Eastern’s serving game, along with their aggression on the attack, are two of the foundations that Eastern discussed at practice this week.

Considering the team’s aforementioned liabilities at the moment, head coach Julie Allen doubled down on her contention that, entering into the second half of conference play, she is sanguine about Eastern’s trajectory.

“However, I think our team has worked hard at fighting, as you can tell, at (Jacksonville State) and taking (Tennessee) Tech to five,” Allen said.

With just two conference wins to their name, Eastern Kentucky’s deep dive down the standings and spate of conference losses was the worst such record since 2012, thanks to their pair of defeats at Tennessee-Martin and Southeast Missouri.

Eastern Kentucky was pegged as the fourth best team in the conference, as per the preseason poll, but two months later, the Colonels are tied for last in the standings.

From afar, the task of sizing up these opponents has not been an uncomplicated task. It is difficult, Allen added, to ascertain what the Panthers should expect.

“I am not sure what EKU (Eastern Kentucky) is working on, but they definitely have some great, aggressive pin hitters,” Allen said. “So we are stopping that with our blocking. We have been working on that as well.”

Riding what was then a five-game losing streak, the Colonels winded their way through a gauntlet last Saturday against SEMO, concluding the match with a .101 hitting percentage.

A notable night from Kennedy Wilson, who totaled a career high 13 digs, would, in more ways than one, be insufficient.

The Eagles played the exact same teams last weekend, except, in their case, they were able to uncover the defects of both teams.

In the win over SEMO, for example, Morehead State tallied 61 assists to the Redhawks’ 43, a task that Eastern Kentucky, which accrued 24, could not accomplish.

Her sophomore teammate, Olivia Lohmeier, took it upon herself to lead all players with 17 kills, as the Eagles glided past SEMO 3-1.

“Morehead is a very versatile team,” said Allen. “They are coming in very confident and strong, so it would be great to be the underdog and take someone out that has that confidence.”