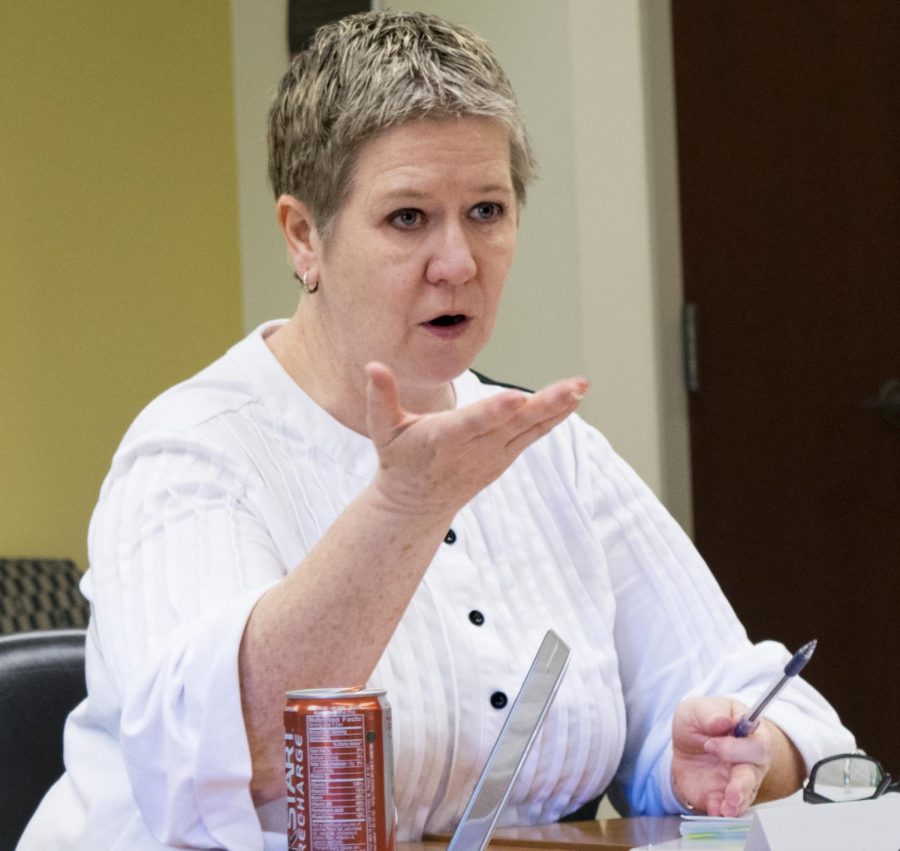 Marita Gronnvoll is the chair of the Council on Academic Affairs and is a communication studies professor. The council discussed the new governance proposal that came from the Faculty Senate’s last meeting at its Oct. 18 meeting.

The Council on Academic Affairs discussed the new governance resolution brought forth during the Oct. 16 Faculty Senate meeting at its meeting on Oct. 18.

In the draft proposal Jeff Stowell, senate vice-chair and psychology professor, shared with the senate on Tuesday, he wrote, “Curricular bodies on campus (the Council on Academic Affairs, the Council on Graduate Studies, the Council on Teacher Education) are not explicitly asked to consider the new program in the context of the university mission or the fiscal and personnel resources required.”

The proposal shared at the senate meeting stated that new programs, the ones that require Illinois Board of Higher Education approval, needed more faculty input when considering the allocation of resources and the alignment to Eastern’s mission.

Stowell said at that Oct. 16 meeting that the senate constitution calls for them to have a consulting role on matters that have major effects on structure or staffing, which is why he said he thinks the senate should be more clearly charged with looking at these specific aspects of new programs that require IBHE approval.

Although provost Jay Gatrell and his office already have new programs present on mission and resources, Stowell said he thinks those presentations should be brought back to the senate for discussion either through the provost’s report or through the executive committee of the senate’s meetings.

The senate would then only submit a report on the programs they look at if there appears to be a problem with either mission or resource allocation.

Marita Gronnvoll, CAA chair and a communication studies professor, said she likes this proposal more than other proposals, which implied a codified hierarchy on the part of the senate.

“I don’t know what the end product (of this resolution) is going to look like, but I was very specific that CAA would oppose that if it said Faculty Senate has oversight over curriculum bodies,” Gronnvoll said.

Amy Rosenstein, CAA member and professor in the department of special education, said this new governance proposal has left her slightly confused.

“As far as resources go, that’s all in the discussion in the provost’s office, … (faculty proposing a new program) tease out all information before it gets to the Provost’s office and then it goes through their own college curriculum committees, so it’s not like faculty in that college have not already had a say on it,” Rosenstein said. “Then it comes to (the CAA), then as (elected) faculty, we are the voice of the faculty (on curriculum).”

Rosenstein said she feels the senate keeps changing what the conversations are about.

“It seems like every time (CAA) has a conversation … about what’s going on at Faculty Senate, there’s something new to it,” she said. “Initially it was oversight, and then it was ‘we want (more) faculty voice’ and then it was ‘well we want to make sure resources are accounted for.’”

Gronnvoll said this conversation about what the senate can and cannot do has been happening for many years.

“We have a long history with (disagreement on the Faculty Senate roles), this didn’t just start this semester. It goes back several years with Faculty Senate, and with different people on Faculty Senate, and the way that I am understanding this is they are revising their constitution and the whole idea here is to achieve clarification so we don’t have these perennial arguments,” Gronnvoll said. “For certain faculty senators, what is missing is this conversation about allocation, which does happen at the provost’s office, but they would like this to be from faculty perspective, not from (the Vice President of Academic Affairs) office’s perspective.”

Many council members said they would need to see more clarifying language in the proposal, and see if this process would add more time to what they already consider to be a lengthy process, before they would be able to have a more thorough discussion about this proposal and its ramifications.

Gronnvoll said the chairs of the various committees have been kept informed in the senate’s policies and plans, but she said she is not sure if that will make a difference.

“The chairs of the curricular bodies (have been) actively involved, but I don’t know what that’s going to mean in the end. I honestly don’t,” she said. “I guess we’ll find out when we see the resolution.”

Gronnvoll also said she thinks this proposal is an improvement over some they have discussed this semester.

“I am less concerned now than I was a few weeks ago,” she said. “It does seem like (the senate) is trying to write this in the most narrow way possible, which I think is good for them and good for all the curricular bodies.”

Also discussed at the meeting were the clarifications in the departmental honors history program and the extension of the general education moratorium, both of which were unanimously approved.