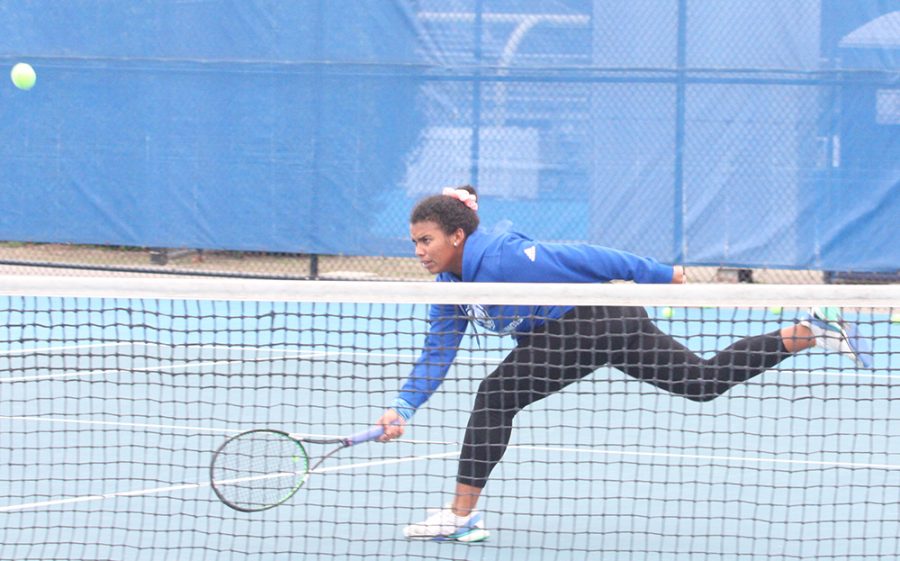 Eastern sophomore Karla Contreas returns a ball in practice at the Darling Courts on Monday. The women’s tennis team will compete in the ITA Regionals in Ann Arbor, Mi. beginning on Wednesday.

The Eastern women’s tennis team has begun its season with a collective 20-8 record as a team. This record has triggered a momentum surge that the team hopes to carry over to their ITA regional at the University of Michigan this week.

Head coach Chris Tolson has seen in his players that they have a quality to never quit. That while their coach has big goals, his expectations are for his players to control the things that they can, which is their attitudes and efforts.

“My big goal headed into the ITA tournament is for our team to build confidence in realizing they can compete with the best teams in the nation,” Tolson said. “There will be several ranked players and teams we are competing against, if we happen to get several wins that is great.  But most important is that when we finish this weekend and head home we have a belief within ourselves that if we keep working hard. This spring and later on this year when we get another crack at the top programs and at the conference tournament, we know we belong competing with the best.”

Papavasilopoulos and Pugachevsky have both started their season 6-0 and both aim to keep their momentum going. Papavasilopoulos made it past the qualification round last year and into the first round.

“My mindset going into ITA’s is to just have fun and compete the best that I can,” Papavasilopoulos said. “Hopefully we all get at least a couple of wins under our belt and beat some big schools.”

Martin had a similar thought to Papavasilopoulos.

‘I’m going in with a positive mindset, because there are going to be a lot of great schools and players at the ITAs and I am excited to play against them and be put into matches,” Martin said. “I have nothing to lose and I am so excited to fight for a win. I think we all want to play our best, give it everything we have to continue to win matches this fall. Each match is an opportunity to get better, win or lose I think we will all be able to take something away from this weekend.”

Pugachevsky was close in last year’s ITA’s of making it past the qualifying rounds. This year she is focused on making it further in the tournament as well as showing what her and the women’s tennis program here at Eastern are made of.

“I want to compete. Not think about the top schools that I am playing against and just go out there and show what I got,” Pugachevsky said. “You can never predict the outcome of matches. As a team, I hope that we come out there and show that EIU is a school to be feared whether we are ranked or not. People underestimate us, so I want us to come out there and leave everything we have on that court.”

“My mindset is to compete and battle it out there on the court irrespective of who I play and which team they are from,” Slaria said. “I’m hoping to get some wins in singles and doubles. My aim would be to make it past the qualifying rounds in both singles and doubles. As a team, I think we all want to do our best and show the other teams how dangerous we can be.”

The Eastern women’s tennis team will begin the ITA Regional Wednesday at the University of Michigan in Ann Arbor, Mi.