Notebook: OVC making its mark in Division I rankings 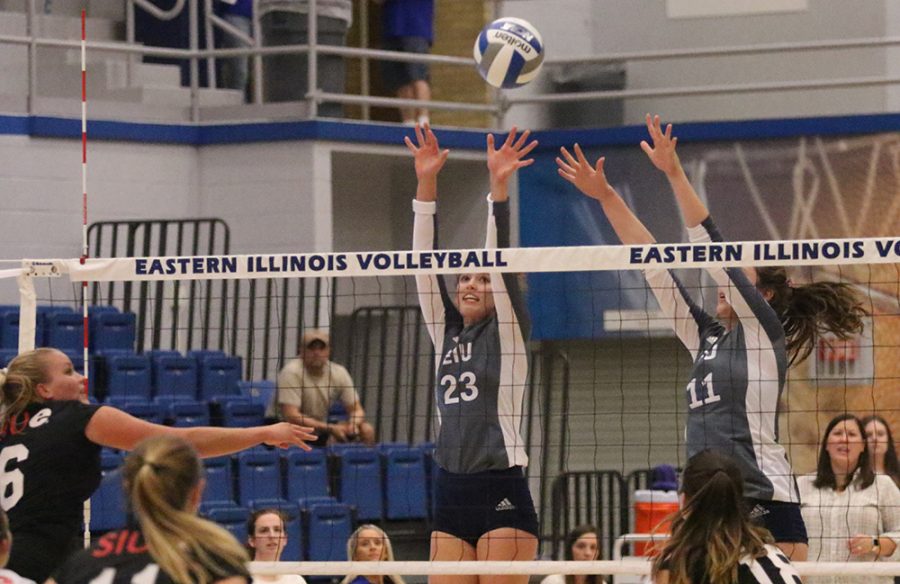 Eastern redshirt-freshman Kylie Michael (23) and senior Abby Knight (11) jump up to block a shot by a Southern Illinois Edwardsville player on Sept. Lantz Arena. The Panthers won the match 3-0 and currently hold a record of 7-16.

The Ohio Valley Conference has not gone unrepresented in the ranks of NCAA Division I volleyball this season.

OVC players have been at the vanguard of a few, distinct statistical departments in 2018, whether it be aces, blocks or assists per set.

Three such players, junior Danielle McCarson and senior Maddie Fella of Morehead State, as well as Austin Peay senior Kristen Stucker, stamped their signatures on the NCAA in their own right.

Some of the brand name conferences, like the Big East, do not have as many players at the Division I forefront.

Long removed from her Division I debut, Fella underwent a transformation, from less than one block per set as a freshman to 1.44 as a senior, supplanting what were her previously established records. This two-time defensive player of the week has never backpedaled, at least in terms of her numbers.

She was third in blocks among OVC opponents last year and, in one summer, added new ingredients to her game, as verticality and agility thrusted Fella to 16th in Division I volleyball.

As the preeminent blocking team in the conference, the Eagles, who are also fourth in service aces, wield influence over other Division I defenses, too.

Her teammate, no less, has taken this to task.

McCarson, winner of a regional championship as a junior in high school, inspired Morehead State with a team leading 346 digs.

The Morehead State brain trust opted to have McCarson forgo a season of volleyball, thus handing her the designation of redshirt.

Although the bench was a permanent resting place for her freshman year, she became a linchpin for the Eagles ever since then.

It was the diving plays and overhand digs that endeared her to the defense last year, but these days, McCarson is more of a mainstay on the Morehead State offense. Her .49 aces a game are 17th best in the nation.

Stucker has been wearing down and outdistancing her opposition in much the same regard.

Career wise, these attributes materialize every match in the case of Stucker, who, as a result of her precision in assisting teammates, is the only player to have secured OVC setter of the year award twice.

On Saturday at Tennessee State, Stucker assisted on 51 of Austin Peay’s 62 kills, which facilitated her upward climb to 13th in collegiate volleyball.