Sosnowski, Behm save the day for Eastern men’s soccer team 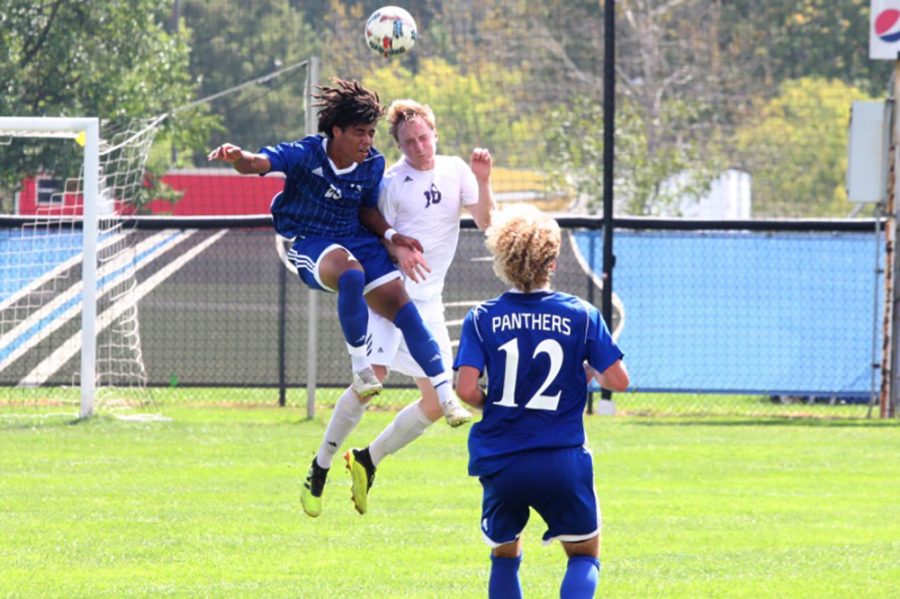 Eastern freshman Cole Stephens jumps up with a Western Illinois player to head a ball Saturday at Lakeside Field. Eastern beat the Leathernecks 1-0 in double-overtime.

The rest of the men’s soccer team has Christian Sosnowski and Cameron Behm to thank for the team’s 1-0 win Saturday over conference opponent Western Illinois.

Eastern’s three conference points from Saturday’s win are thanks to both players, Sosnowski on the offensive side of the ball and Behm from the defensive side.

The match went to a second overtime with a 0-0 stalemate.

Eastern got a throw-in about 25 yards from the end line in Western’s half of the field with five minutes left in the second overtime.

Toby Andrews took the throw for the Panthers and threw the ball into the middle of the field, not aiming for Sosnowski’s head originally.

But Sosnowski was right in the middle of the field, about 21 yards from the goal, in the perfect spot to receive a Western player’s deflection off the throw. In one smooth motion, Sosnowski volleyed a nice little blooper out of the air into the back of the net.

“At first I was back post,” Sosnowski said. “Then I noticed that nobody was at the top of the box so I just shifted my way in there and just saw the ball coming and hit it one time.”

Sosnowski’s goal is his third for the season and still the team-leading total for this season. He has not been playing as much lately, as he has had a groin problem the past couple weeks.

But he has been coming in during the later parts of recent matches and is feeling better.

“It’s still not 100 percent, I’m just coming off the bench for now, but yeah I’m hoping it gets better,” Sosnowski said.

Eastern had seven less shots in the match than Western (16-9), and two fewer shots on goal (6-4), but only Sosnowski’s was needed.

Despite being outshot, Eastern had more shots Saturday than any of its previous five matches, and the Panthers had three great chances to score.

Kris Luke had a shot go just over the goal with 10 minutes left in the first half from about 25-yards out. Thirty seconds before that, Cole Stephens chased down a ball over the top of the defense and beat a defender to get a shot 10 yards from the goal.

Stephens’ shot deflected off the far post of the net and was booted away by Western.

Stephens also had an open shot at the top of the box with 11 and a half minutes left in the second half, but he took one-too-many touches and the goalie ran out and took the ball from him.

The match started slow for Eastern offensively, but the Panthers got going later in the first half.

The Leathernecks had some of their own great chances to score, including a shot two and a half minutes into the second half.

That was when Behm saved the day for Eastern.

Eastern goalkeeper Jonathan Burke dropped the ball on accident, then picked it back up, which is not allowed, and gave Western a free kick just outside the box.

Leatherneck midfielder Paul Kirdorf took the kick and had a curling line drive headed for the upper right corner of the net for a 1-0 lead.

But Behm was positioned there before the kick and jumped and emerged at the last second from behind a group of players to head the ball away.

Lara said both Behm and Sosnowski are competitors and had a winning mentality Saturday, and that is why they both made those clutch plays for Eastern.

Denver is still in first place in conference standings, and Eastern is now in second place with Saturday’s win. Omaha is third, Oral Roberts and Western are tied for fourth, and Fort Wayne is last.

Saturday’s win is important for the team, Lara said.

“For me, it’s one step closer to one or two points away from qualifying for conference tournament play, so we’re closer to that goal,” Lara said.