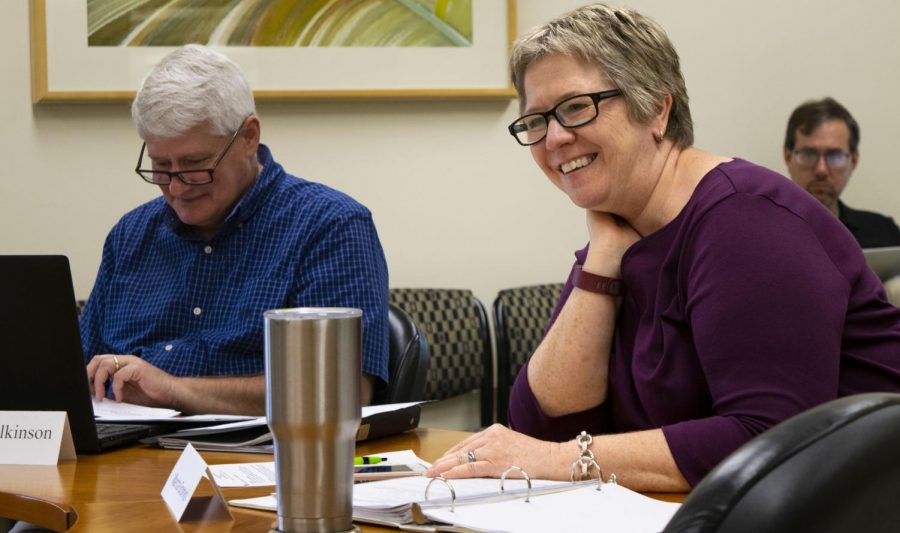 Marita Gronnvoll is the Council on Academic Affairs chair and a communication studies professor. The CAA met on Thursday at 2 p.m. in room 4440 of Booth Library.

The Council on Academic Affairs discussed shared governance and the makeup of the Academic Program Elimination Reorganization Committee at their Thursday meeting.

Since Jan. 2018, a shared governance plan has been discussed around campus with varying solutions.

The most recent two solutions discussed by the Faculty Senate in Sept. included a change in the senate’s constitutional language or the creation of a Faculty Congress that would act as an umbrella for committees on campus.

The discussion of any shared governance issues was tabled until the senate’s Oct. 16 meeting, with committee chairs, including the senate chair and vice chair and the chair of CAA, having met Wednesday to discuss different solutions.

New possible ideas of shared governance were discussed at this lunch meeting.

Marita Gronnvoll, CAA chair and communication studies professor, said the discussion centered around what part the senate plays in the committees.

“(There were) quite a few questions about what role Faculty Senate would play in the curriculum process, if any,” Gronnvoll said. “This discussion is going to have to continue on whether or not the senate should have a role (in curriculum).”

One potential idea that was discussed at the meeting was, Gronnvoll said, having the senate review new programs, not for curricular content, but for their continuation of Eastern’s mission and the resources that new program will need.

Gronnvoll said that these are things the provost’s office looks at before a new program gets to CAA, but she said she thinks having faculty input on resources and mission could be beneficial.

“I wouldn’t say it’s duplicating what the provost does, but it is a different set of eyes rather than just the provost’s office,” she said.

Jeff Stowell, senate vice chair and psychology professor, was in attendance of Wednesday’s meeting and also attended CAA to aid in the shared governance developments.

He said he sees this plan as a way to show unified faculty approval of a new program when it ends up in the provost’s office.

“I don’t want this to be perceived as just a stopping mechanism, but also a support mechanism,” Stowell said.

Gronnvoll and Stowell said this proposal is in a very early draft mode, and that the various committee chairs will continue meeting to work out the details, such as at what stage in the curriculum approval process the senate would look at the new programs.

The council also looked at the possibility of taking on the duties of APERC, which was discussed at Tuesday’s senate meeting.

Many council members said the plan made sense, but the biggest problem is that, to serve on APERC, a faculty member has to be tenured, while that is not a requirement to serve on CAA.

This means that some CAA members would not be able to serve on APERC if the council ended up taking those responsibilities.

To solve this, it was proposed to potentially create a pool out of eligible committee members, from committees like the Council on Graduate Studies and the Council on Teacher Education, and pull from that whenever needed.

A course, HIC 2100G: Introduction to the Health & Medical Humanities, was revised as well by the council Thursday.

The approved revision included adding the cultural diversity designation to the course and removing the prerequisite English 1001G so Freshmen have an easier time starting this program their first semester at Eastern.